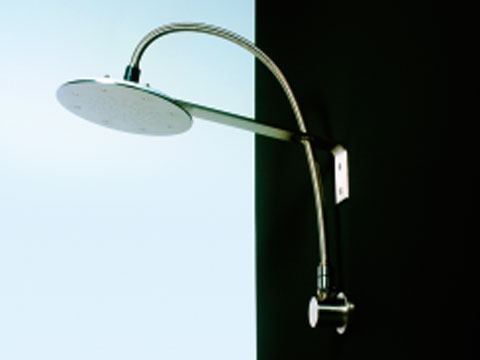 According to the Kohler Company, 87 percent of Americans spend an average of 80 hours a year in the shower. It seems that our need for speed and relaxation at the same time has pushed the bathtub aside in favor of the high-performance shower. But the hottest shower product of the moment—the giant rainhead—is actually 100 years old.

A product of Edwardian England, the large, pan-shaped overhead shower was the bath fitting of choice at the turn of the last century and into the 1930s. When the Dorchester hotel in London opened its doors in 1931, Barber Wilsons, one of the earliest plumbing manufacturers, along with Samuel Heath, outfitted all of the bathrooms with its “modern” overhead showers. In 1990, the hotel reopened after a complete overhaul that kept the original Art Deco details intact. Now the restored bathrooms, sheathed in Italian marble and etched glass, feature state-of-the-art versions of these same luxurious showerheads, which range in diameter from a modest 8 inches to a generous 12 inches or more.

Not surprisingly, the hotel experience created the current demand for the rainhead—aptly named for its direct, drenching spray that makes you feel as though you are standing in a rain forest. Barber Wilsons’ product, also found at Claridge’s hotel, “has had such positive feedback from guests that the company decided to include a selection in its residential line,” says Melissa Daniell, marketing coordinator of the company’s U.S. distributor, Soho Corp.

The Perrin & Rowe Collection from Rohl is a faithful reproduction of the genuine article. “People are well traveled, and if they have stayed at hotels like the Savoy, the Connaught, or Gleneagles in Scotland, they have experienced one of these showerheads—the way they work and the way they look,” says Greg Rohl, director of marketing and product development. “And when they get home, they want to re-create that experience.”

For Barbara Sallick, vice president and design director of Waterworks, a leader in the current craze for classic wares, the appeal is twofold. “They feel fabulous, like an enormous rainfall over your head. The 12-inch size literally covers every part of you with water,” she says. “They are also beautiful and substantial.” Nevertheless, for the perfect shower, she advises adding a standard wall showerhead, a hand shower, and body sprays. “You don’t always want to stand under it and get your head wet.”

Ultimately, the experience is palpable. “People are seduced by them,” says New York interior designer Jamie Drake. Architect David Ling, lauded for his innovative use of space and materials, loves “the idea of bathing in the rain,” but he could never make the traditional fitting work in his modern plans. Fortunately, demand has motivated such contemporary designers as Dornbracht, Fantini, and Boffi to interpret the concept with cutting-edge flair. Thus, when Giulio Gianturco designed Boffi’s new Minimal line, his idea “was to create a shower that would guarantee the same quantity of water from a stainless steel plate reduced to a minimum.” Less, apparently, can still be more.