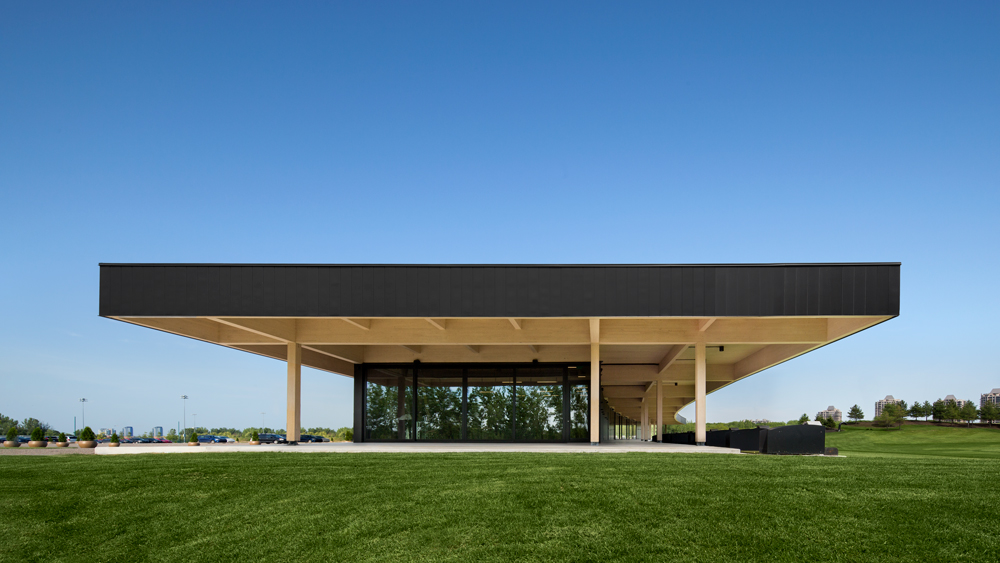 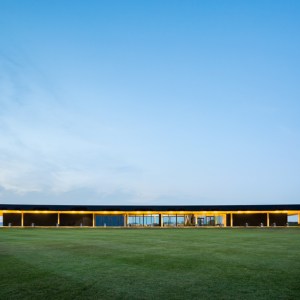 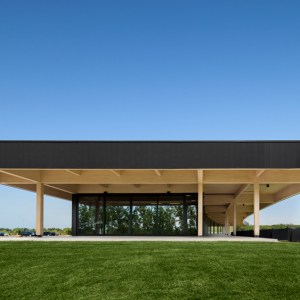 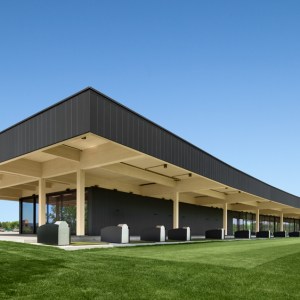 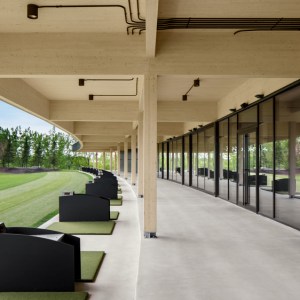 Canadian studio Architecture49 recently designed an ultra-modern clubhouse for Golf Exécutif Montréal. It’s the kind of space that breezes past the game’s well-behaved conventions, driving out a few stereotypes (and yawns). Not to take away from those historic, world-class courses in majestic settings, or felicitous fashions that strut down the green, but for the design crowd, the game hasn’t typically brought down the house.

This project is different. Visually impressive, the building’s roof stands out not only for its size, but also for its character, acting as a strong, cantilevered plane that extends beyond the internal walls. Every view, close or far, is enhanced by the contrast of light and dark and a back-and-forth exchange between indoors and out.

Rather than break out separate areas for every function, Architecture49 delivered a unified concept, creating a cohesive space where the driving range tees, bar, lounge, full restaurant kitchen, pro shop, and golf simulators are housed in one contemporary structure. It’s a unique point of departure for anyone with a club membership. And one that the design addresses directly, according to Alexandre Sauvé, senior architect at Architecture49. “The originality of our project lies in the fact that we have merged several functions: a clubhouse with its services and a covered practice area under one roof. Indeed, these two functions are often separated in golf resorts. The curve of the building, which follows the traditional configuration of a practice field, is also an important element of our design.”

What began as a request for a sheltered area so members could use the driving range regardless of the weather evolved into a complete revision of the traditional format. Sauvé notes that the client was very involved in the process, leading to the atypical pavilion. Wood is the most prominent building material, a choice that the studio made for aesthetic reasons and its natural impact. “It has been proven that the presence of wood in a building has an immediate effect on the well-being of its occupants,” notes Sauvé. “For this reason, this abundant renewable resource in Canada quickly established itself in the design of the clubhouse. The client also wanted the project to include as many local materials as possible, the wood came Chibougamau, up north Québec.” The team also enlisted local artisans, suppliers, and craftspeople, taking a locavore approach with design.

The current collective desire for clean, open-concept spaces was not lost on Archiecture49. Situated on Nuns’ Island, a lush spot along the St. Lawrence River that faces downtown Montreal, the clubhouse was designed to work within the natural environment (golf is, after all, a sport for the outdoors-y types), not compete with it. “The building also features generous windows that provide views of the golf course and allow as much light as possible to enter the building,” Sauvé says. Materials like, glass, zinc and concrete quietly work to keep the look minimal and uninterrupted.

“It also blurs the boundaries between the inside and the outside,” he says. “During three seasons, the pavilion can naturally breathe and allow a freedom of movement for the guest. From a business to a community clientele, the pavilion has the potential to become community hub with services far from his main function, golfing.  We wanted a pure and naturally lit environment, noble materials for the finishes with refined lines and shapes, to allow a high level of comfort and conviviality for the guests.”

Of course, automated controls are nice, but players are there for the game—so the clubhouse is home to four premium golf simulators. “They are equipped with an exhaustive bank of world-famous golf courses.” Sauvé contends that “the quality of the experience is similar to a virtual reality experience.” Two simulators have glazed sliding partitions, which offer privacy, while lounge seating serves as a hang out area for small groups. The other pair of simulators is set with a bar and multi-use space to serve more guest simultaneously. Game on.