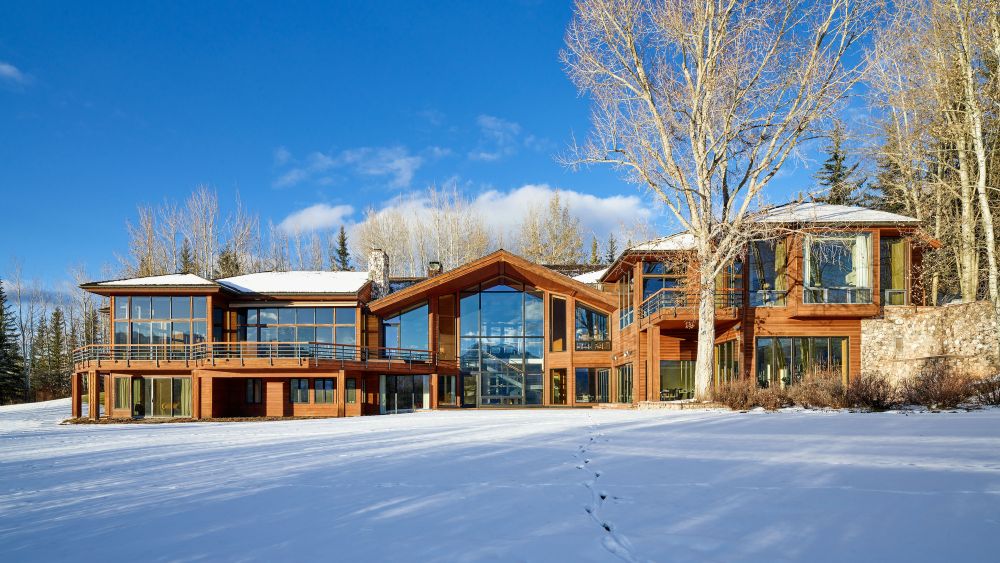 Aspen’s world-class ski scene would be nothing without its iconic snow-capped mountains, and one newly listed abode offers epic views of all four ranges.

Located in the tony community of Starwood, the contemporary chalet was a thoughtful collaboration between late interior designer Naomi Leff and architect Frank Visconti. Sited on nearly three private acres, the stately residence was originally built in 1987 and offers a whopping 15,000 square feet of living space. That makes it one of the largest listings in the area.

The wintertime retreat comes decked out with seven bedrooms, seven full bathrooms, a swanky home theater, a gym and a three-car garage. You’ll also have dramatic views of Snowmass, Aspen Mountain, Aspen Highlands and Buttermilk—which are breathtaking, to say the least.

The interior is at the height of modern alpine design, with an abundance of natural materials, soaring ceilings, detailed millwork and a cozy fireplace. The warm wood paneling is juxtaposed with floor-to-ceiling glass that creates a bright, airy feel while providing unbeatable panoramas.

Spread across two levels, the home has a flowing, open-plan layout. The sprawling great room includes built-in bookshelves and a number of plush sofas for the bookworms in the mix. Nearby, the colorfully decorated chef’s kitchen is outfitted with high-end appliances for gourmets. Extra perks include an elevator, an oversized home office and a second entertainment area with an air hockey table and foosball table. There’s even an in-house sauna in which you can rejuvenate after a taxing day on the cold Colorado slopes.

The kicker? The pad will set you back $35 million. Hey, nobody said such a snowscape would come cheap.

Click here to see all the photos of Danielson Drive.