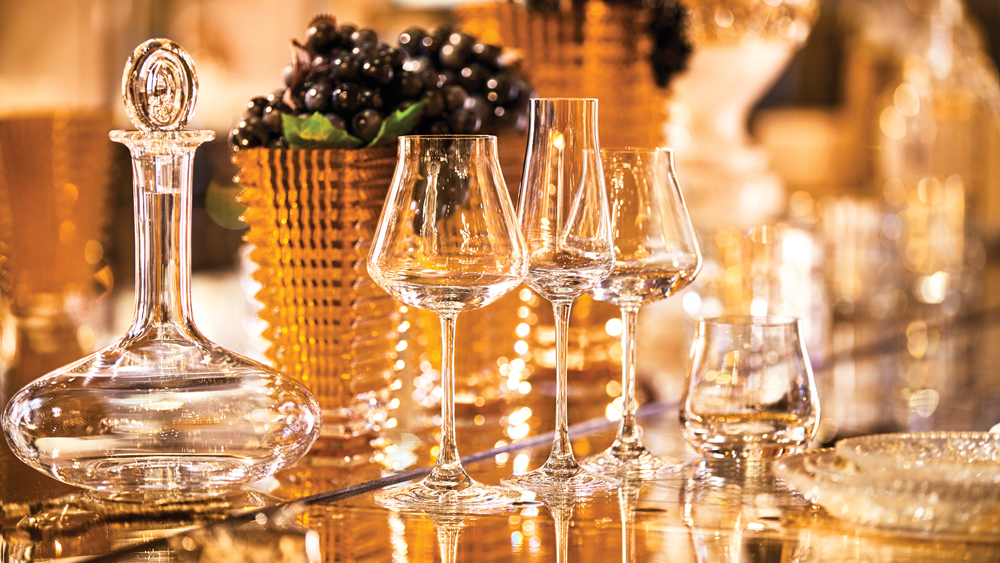 Destiny doesn’t always announce itself with lightning bolts and dramatic music. Sometimes it favors the discreet dealings of a really good dinner.

A few years ago, Coco Chu, the chairwoman of Fortune Fountain Capital, a prominent Asian financial group, was in Paris attending a runway show at the invitation of Chanel. Her friend at the fashion house suggested dinner at Le Cristal Room at Maison Baccarat, a destination in the 16th arrondissement that elegantly undermines any prosaic English translations of “museum café and gift shop.”

A sophisticated free-fall into the historic craftsmanship and design of the French cristallerie, Maison Baccarat was once the home of artist and iconoclast Vicomtesse Marie-Laure de Noailles and her husband, Charles. Baccarat reimagined the residence in 2003, enlisting Philippe Starck and Gérard Garouste for the redesign at the time. The evolution continues today, with legendary French designer Jacques Grange recently renovating Le Cristal Room restaurant, and with a new bar, garden, and restaurant concept on their way. Altogether, it is the kind of environment, with its sumptuous 19th-century surrounds, that compels other well-appointed flagships and earnest concept shops to let out a deep, impassioned sigh.

For Chu, the experience at Maison Baccarat was transformative. She was already familiar with the brand’s carafes and stemware, having visited the Hong Kong boutique, but her time at 11 place des États-Unis made a profound impression. “I met and touched the culture, which is quite different from the feeling you get when you see Baccarat pieces in the shop,” she says. “You just see the beauty. You come here and you have more of the overall feeling—you feel what is beauty.”

As Chu’s interest developed, she visited the Baccarat museum and learned more about the company. Eventually, that indelible crystalline resonance would entwine with her professional life: This past June, Fortune Fountain Capital acquired a majority stake in the 253-year-old French heritage brand.

Chu’s arrival at the company coincided with the release of Baccarat’s new autumn/winter collection Goldfinger, which debuted in September at the Maison. The series summons all the debonair stylings of cinema’s best-dressed spy but none of his outré showmanship, taking beloved Baccarat pieces like Marcel Wanders’s New Antique vase and Starck’s Our Fire candleholder and drenching them in auric hues. The Louxor vase, an existing piece inspired by ancient Egypt, has its diamond cuts and bevels saturated in amber, while the new Eye votives and picture frame (an exclusive at Neiman Marcus until January) feature the real-deal moxie that only hand-brushed 20-karat liquid gold can provide. Rounding out the debut, the company looked to a few classics like the Harcourt, with its famed empire design hand-applied by gilding specialists and its Champagne bucket graced with stately gold handles.

The new series also includes special reissues in limited numbers, such as the Malmaison perfume bottles that were originally created in 1913 and presented as a wedding gift in 1956 to Princess Grace of Monaco and Prince Rainier in 1956. The latest edition features a new decoration inspired by the drapery of the Empress Josephine apartments at the Château de Malmaison near Paris. Similarly, the Atlantic decanter and glasses—which were designed by George Chevalier, Baccarat’s longest-standing artistic director, from 1916 through the early 1970s—revive the Art Deco swing of 1930.

Each piece in the series can stand alone, but seen all together, in the nocturnal glow of the Maison where the collection debuted, the takeaway is crystal clear: While heritage and craftsmanship are essential, design is nothing without emotion. “As a user, this brand gives you a special feeling of elegance,” says Chu.

It’s a distinction Chu understands as a discerning client herself. “You could say that I’m a representative of the new Chinese people,” she says, describing a generation of well-traveled, style-conscious citizens who are often mischaracterized but very global in the pursuit of their own aesthetic desires.

Chu’s travels and aesthetic pursuits brought her to Baccarat’s manufactory for the first time in July. It was there that she discovered just how extensive the company’s archives are—more than two centuries of designs that can be produced on commission today. “What super fans love in Baccarat is culture,” she says. “And when you look at a Baccarat product and its history, you find the brightest designs because they have been made for special occasions and special users.”

While cosmopolitan clients in Asia and the United States, royal families in the Middle East, or European aristocracy are Baccarat-loyal, Chu is hoping to captivate more customers via design and experience. She notes that not every Baccarat devotee lives in a palace, just like “a woman doesn’t wear a statement ring on every finger.”

Asked about one of her favorite pieces from the Goldfinger line, Chu says she is drawn to the highly detailed amber crystal carp. Fish symbolize good fortune in Chinese culture. “And for us, it has another special meaning,” she says, “because this is the first year we’re working with Baccarat, and we really hope that it will lead to a new golden age.”