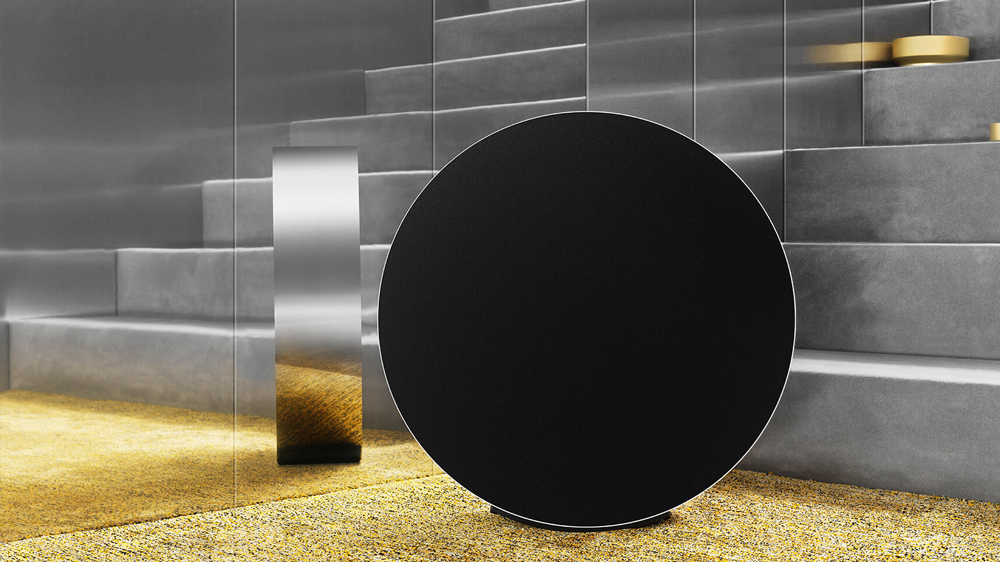 You can’t accuse Danish audio manufacturer Bang & Olufsen of not trying anything new. Unlike many audio brands, B&O doesn’t just focus on making its audio quality better, the company also seems to challenge itself to create new ways to present music—whether that be the customizable array of speakers that make up the Beosound Shape or the faceted curves of the Beolab 90.

The company’s newest wireless speaker, the Beosound Edge, immediately recalls the Beoplay A9, another circular wireless speaker. But whereas the A9 was shaped like a saucer and often displayed on easel-like legs, the monolithic Edge is shaped like a flattened cylinder and can sit directly on the ground—though wall brackets are also available. The very essence of minimalism, the speaker is dominated by its matte black fabric covers, which spread over the entire front and back of the device. The speaker’s frame is made from shiny aluminum and provides the only visual contrast to the black maw in the center.

Not wanting the speaker’s touch controls to distract from its visual appearance, the Edge uses proximity detectors to only illuminate the touch control interface when you are standing in front of it. And while touch controls are tactile by nature, Bang & Olufsen takes it a step farther by allowing you to adjust the volume by rolling the speaker clockwise or counter-clockwise. Roll forward softly and the music will slowly rise; roll with more authority and the volume will shoot up more dramatically. Once you’re done, the unit rotates back to its usual position.

Between the covers, you’ll find a large woofer for bass and two pairs of a 4-inch midrange driver and a 0.75-inch tweeter—one pair on each side, firing in opposite directions. Aside from the rolling volume control, the wow factor for the Edge is its Active Bass Port, which borrows the best from closed and ported cabinet designs by opening when the volume is loud and the bass could use a kick and closing when playing at a lower decibel range. Essentially, it’s the same principle behind automatic spoilers that rise as the car goes faster.

Now that you’re excited, here comes the bad news: You’re going to have to wait until mid-November to get your hands on the new $3,500 Beosound Edge. The good news? You still have time to work on the playlist you’re going to use to test this bad boy.