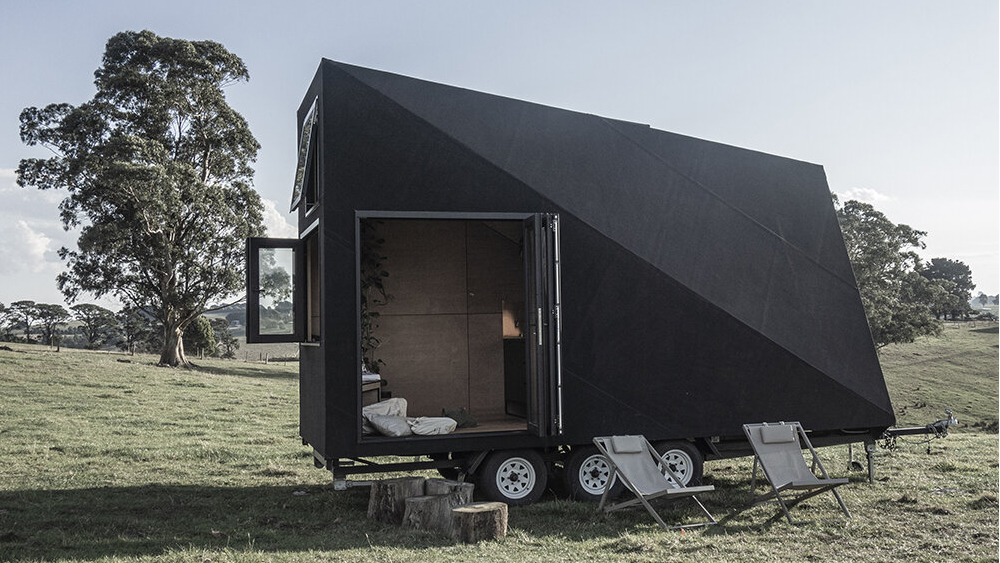 Who says your mobile home can’t be a true work of architecture?

Australia-based firm Studio Edwards designed its newest abode as a modern mico home that ignores the gimmicks usually associated with the category, opting instead for something with dramatic style. Inspired by the classic A-frame cabin and Airstream campers, the unit, dubbed Base Cabin, has the added advantage of functioning as a fully mobile dwelling, due in no small measure to its triple-axle design, while retaining all the architectural finesse of spaces much larger than its 19-foot frame.

“The A-frame uses less material than conventional portal framed buildings,” architect Ben Edwards told Dezeen. “This was an important consideration in regards to the overall mass of the building––it had to be transportable.”

Its angular exterior has a peaked roof to take maximum advantage of vertical space with faceted walls that give it a sculptural appearance. Black rubber cladding throughout creates water resistance and also allows it to somehow blend into its surroundings despite its strong lines.

A peek at the airy, wood-lined interior.  Courtesy of Studio Edwards

In contrast to the inky exterior, the interior has a light and airy feel thanks to walls lined in pale marine plywood. The sleeping quarters––consisting of a double bed––are tucked away at the top just beneath the roof while the central bathroom and shower are illuminated by a small skylight. Square footage might be tight, but it still manages to fit in a fully functional kitchenette with a window seat and fold-out table adjacent to a large glazed facade.

Founded in Melbourne in 2016 to bring together architecture, interior and conceptual design, Studio Edwards claims to ignore scale, preferring instead to tackle projects based on the amount of creativity that can be poured into them. Base Cabin poised that exact challenge to the firm. Created as the first design for Base Cabin––the company whose name was also used for this particular model––customers can now order it as is or customize specifications to fit their needs.

See more photos of Base Cabin below: