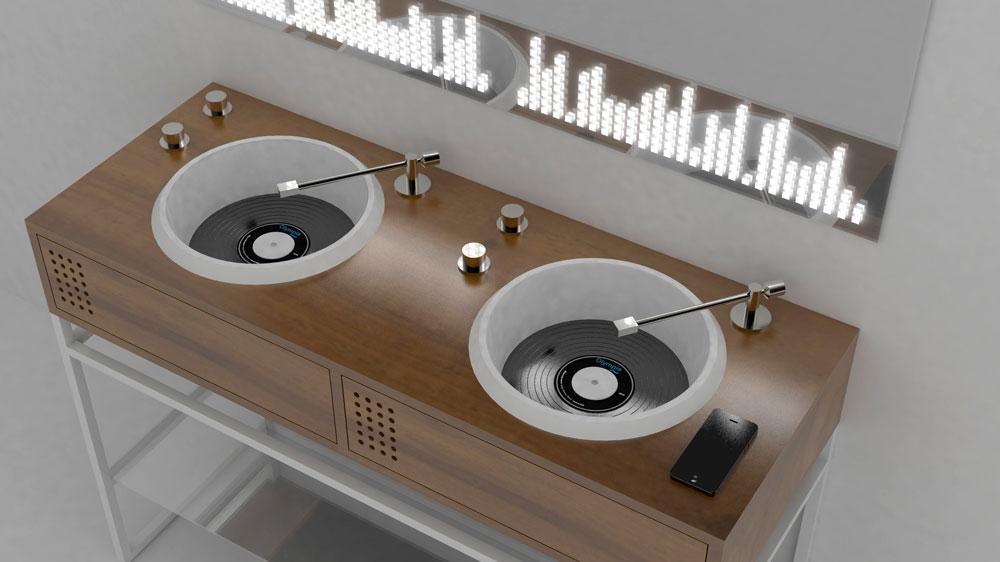 Italian brand Olympia Ceramica has moved this party to the private part of the house. Designer and company artistic director Gianluca Paludi’s new Vinyl collection of sinks and consoles is very directly inspired by his nostalgia for the Eighties, the current decade du jour, and a time when DJs favored turntables and boards over laptops.

Revealed in Milan, during this year’s Salone del Mobile, the series features a single or double console. Recessed basin white basins (with an optional album decal for a dash of extra authenticity) are set within the vanity—available in a wenge, honey or black matte finish. The overall effect is a resemblance to the classic DJ deck. Pump up the volume, indeed.

Paludi’s direct nod to scratching and spinning can be seen in the faucet, which looks like an arm holding a stylus. The taps appear like turntable knobs for volume which, in reality, regulate water pressure and adjust the temperature. It’s a blast of nostalgic whimsy that will baffle the kids. Blame it on the iPhone.

The design features a faucet that resembles a tone arm.  Courtesy Olympia Ceramica

Given that the bathroom places priority on utility and order, Paludi designed Vinyl to perform: A storage drawer checks the practical box, but also gives the people what they want, offering space for an amplifier that is connected by Bluetooth. Discreet holes in the front conceal the speaker and round out the aesthetic.

The complete Vinyl presentation includes a lower shelf in tempered glass, a metal frame in a choice of colors which serves as a towel bar, and a leather bag meant to house toiletries. To keep his old-school DJ vibe on point, Paludi also created an LED mirror with lights that effectively replicate a music equalizer.

The double console allows both DJs to brush their teeth at the same time.  Courtesy Olympia Ceramica

Even if a champagne-soaked club is not one’s first choice for design inspiration, Olympia Ceramica provides a respite from the very well-appointed and somewhat featureless contemporary bathroom designs of the moment. With Vinyl, the brand has managed to do something functional and literal without missing a beat.