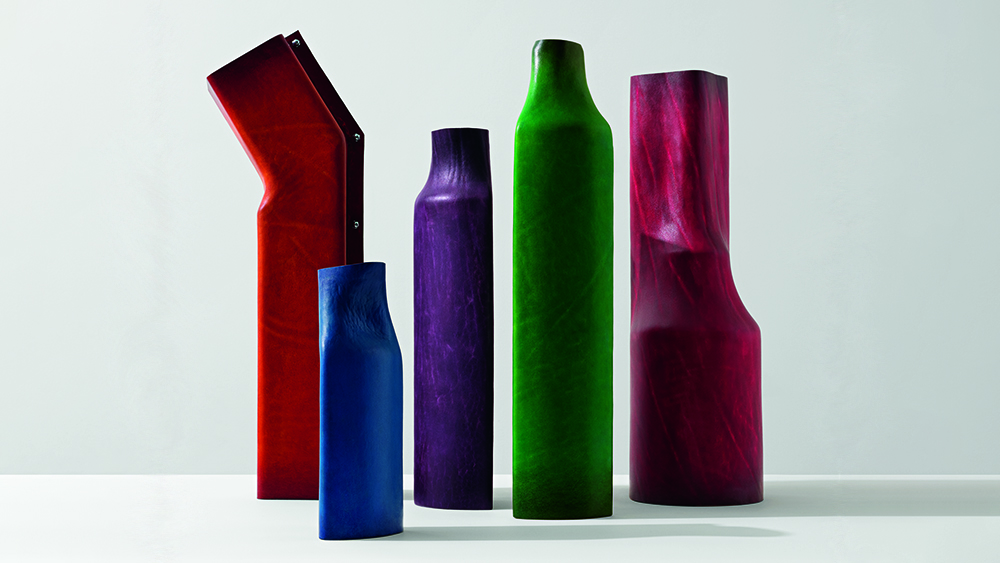 Jean Cocteau, Andy Warhol, Bryan Ferry—Berluti’s client roster reads like a who’s who of 20th-century aesthetes. Now, the Parisian shoemaker is lending its pedigreed hides to some of the 20th century’s greatest designers—but not their soles. Launching November 15, Berluti Objects is a limited-edition collection of homewares by such heavyweights as Carl Auböck II, Gae Auelenti and Tobia Scarpa, sheathed in a spectrum of Berluti’s painterly leathers.

Kris Van Assche, the brand’s creative director, tapped several historic European makers to craft their most classic designs using a not-so-classic material. Berluti’s signature Venezia leather is a work of art unto itself: superlative skins are selected for their ability to hold color, massaged with oils to create an ideal canvas, then meticulously hand-painted to achieve a rich chiaroscuro.

Auböck’s werkstätte incorporated the material into brass desktop accessories, from a letter opener to what is surely one of the most luxurious wastebaskets on the market. Bottega Ghianda’s woodworkers added it to maple trays and picture frames by Aulenti, applying their wood joinery skills to calfskin. San Lorenzo’s silversmiths used it to line sterling bowls by Scarpa, punctuating the precious metal with pops of color. And repping the 21st century, contemporary designer Simon Hasan molded the leather into a series of sculptural vases using a 15th-century technique.

The vibrant palette was inspired by a trip that Van Assche took to Le Corbusier and Pierre Jeanneret’s masterwork in Chandigarh, India—which led to a collection of original Jeanneret furniture from Laffanour Galerie Downtown upholstered with Berluti leather, presented at last year’s Design Miami. While those pieces, unsurprisingly, were quickly snapped up, this collection applies an equally playful twist to an even wider array of canonical works. Warhol, no doubt, would approve.