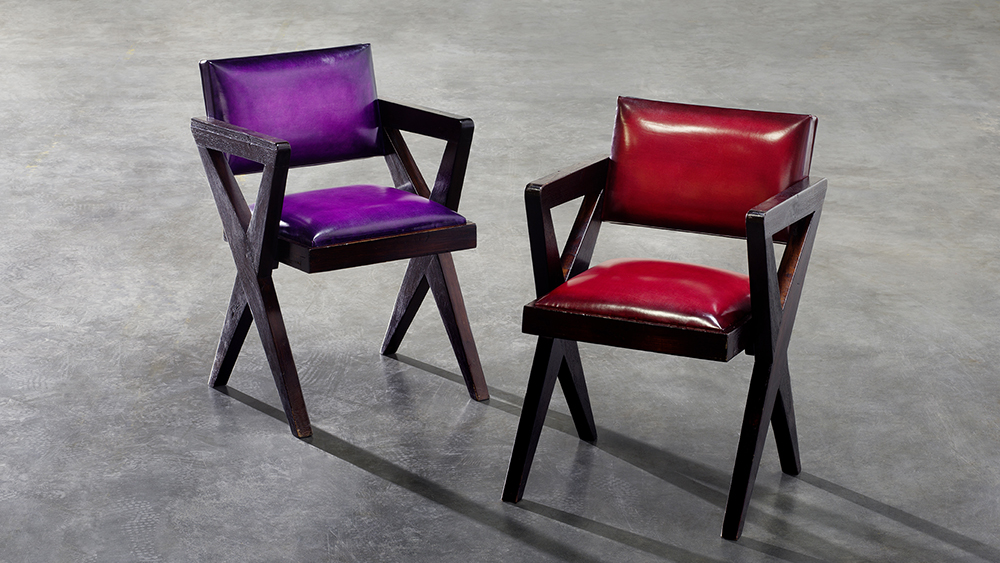 The list may be a short one, but some things simply get better with age. Leather and great design are just two, but Berluti’s latest venture has found a way to combine them like never before. The iconic French shoemaker has applied its artisanal know-how to a collection of rare mid-century furniture by Pierre Jeanneret, reupholstering the legendary pieces in its signature patinated skins. Produced in partnership with Paris’s Galerie Downtown, the collaboration will make its debut at DesignMiami/ and Art Basel Miami Beach next month.

Founded in 1985, Berluti remains one of the world’s premier cobblers, having adorned the feet of everyone from Marcel Proust to Andy Warhol. But creative director Kris Van Assche saw a chance to push the label into new territory after meeting François Laffanour, owner of Galerie Downtown, who shared his passion for 20th-century design. When Laffanour’s gallery came across 17 exceptional pieces by Jeanneret, they set about refashioning them together.

“I have always loved and collected Pierre Jeanneret’s furniture,” said Van Assche in a statement. “I knew that the Berluti patina know-how would give back all their splendor to those iconic pieces, aged through time. It is an opportunity for this Berluti craft to be rediscovered in a new context.”

Pierre Jeanneret was a revered Swiss architect who spent the better part of his career working with his cousin Charles-Édouard Jeanneret, better known as Le Corbusier. The selection of pieces curated by Laffanour has a provenance as thrilling as its design. In 1951, Le Corbusier was commissioned by the Indian government to lead the Chandigarh Capitol Complex project, which entailed completely designing a new city. Pierre oversaw the mammoth job and was tasked with designing all of the furniture for both public and private buildings. Handcrafted from solid teak, every piece––from day bed to high court chair to bench––has a strong form drawing on X, U and V-like shapes.

Every frame was painstakingly restored but left with normal signs of wear intact to maintain its character and sense of history. The upholstery was another matter. It is standard practice for the fabric and cushions of antique pieces of this kind to be replaced. The replacements in this instance just happen to be the impeccable, hand-patinated Venezia leather for which Berluti is famous. All of the furniture was numbered at the time of its manufacture and Berluti followed suit by doing the same with each new leather element. “This project is really something friendly,” Laffanour said.

“I like the man, the way he thinks. I am honored to build this collaboration with Berluti and Kris. It’s not really work, it’s more of a pleasure.” Check out the fruits of their labor during DesignMiami/ and Art Basel Miami Beach from December 2 to 8, 2019.