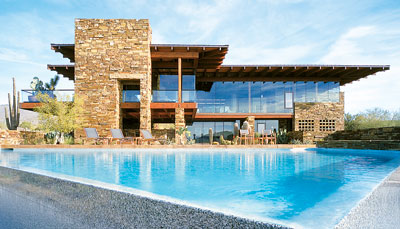 David Hovey has a nuanced view of history. Although steadfastly committed to contemporary architecture, he nonetheless traces his architectural philosophy to the Romans. “The Roman architect Vitruvius’ definition of architecture was ‘firmness, commodity, delight,’ ” Hovey says. “Firmness relates to the construction of the building, commodity to its function, and delight to its beauty. So when I approach the design of a new project, I’m trying to develop all three components to an equally satisfactory degree.” While Hovey’s designs may adhere to these ancient guidelines, they also reflect his training in the modernist tradition at the Illinois Institute of Technology.

In 1978, Hovey and his wife, Eileen, founded Optima, a firm based near Chicago that purchases land, designs houses for that real estate, and then constructs and sells them. In the 27 years since it opened, Optima has built more than 5,000 residential units and seven custom homes, expanded to include a second office in Phoenix, and established itself as an authority in multifamily housing.

As the architect, developer, contractor, and realtor, Hovey can employ his single-family homes as what he calls “experimental labs” for exploring techniques that he then can implement in his multifamily residences. “I try to understand why people did certain things that were successful in the past,” he explains, “and then I find ways to make them even better today.”

In Arizona, for example, Hovey—influenced by the way in which the native Hopi used to construct their homes—built Cloud Chaser and Vanishing Rain, two spectacular linear houses of tilted steel planes and thick wood beams that blend with the Sonoran landscape. Deep steel overhangs work in conjunction with the homes’ layouts and landscaped courtyards to mitigate the desert heat. Hovey then adapted the same shaded outdoor spaces for his two multifamily residential projects in Phoenix’s Optima Biltmore Towers and Scottsdale’s Optima Camelview Village. By incorporating these elements, both structures will improve their efficiency without diminishing their aesthetics when they open in 2006 and 2007, respectively. As a true modernist, Hovey is as preoccupied with notions of structured space as he is with environmental sensitivity, both of which he explores in his book The Nature of Dwellings (Rizzoli, 2004).

Like the contemporary artists whose work he collects, Hovey capitalizes on the existence of modern materials to liberate himself from historical constraints. Steel enables Hovey to create open, column-free spaces, which then grant him greater freedom in configuring interior walls. “A building should be an expression of the age that we live in,” he says. “So the search is to find the best house for a particular environment and the best solution using everything that’s available today.”

Grounded in an appreciation for his architectural forebears but detached from any obligation to mimic them, Hovey also possesses a confidence that allows him to act on his progressive vision. “Architecture, to me, is life and death,” he says. “I take each building as a once-in-a-lifetime opportunity to do something really great, and hopefully each building presents a new set of circumstances and issues. It’s a passionate, lifelong search to create wonderful buildings that people can enjoy.”