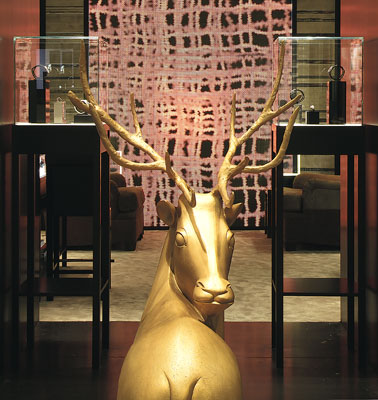 Peter Marino’s style is difficult to define because his modern aesthetic creates a whole new architectural vocabulary. He employs spare lines and innovative materials and combines them with contemporary art—he is, after all, an alumnus of Andy Warhol’s Factory of the 1960s. In addition to architecture, his services include interiors, furnishings, fabrics, and landscape design.

Although he can switch from architecture to design with ease, Marino, a New Yorker, is irritated by interior designers who, he says, masquerade as architects. “A real architect has gone to school for eight years,” says Marino, who received his degree in architecture from Cornell in 1970. “To have someone who hasn’t done that say they always start with the bones of the building when they design is more than a little galling,” he says. “It’s just plain weird.”

During his 35-year career, Marino’s projects have included retail facilities (for Chanel, Louis Vuitton, Dior), hotels and resorts (Four Seasons New York, Yacht Club Costa Smeralda), cultural institutions (Palm Beach Opera House, American Craft Museum), and residences (for Giorgio Armani, Ron Perelman, and Ty Warner). Because he has experience in such diverse environments, Marino does not pigeonhole concepts and materials as suitable only for resorts, houses, institutions, or retail spaces. This approach, which he refers to as cross-fertilization, allows him to begin each new commission with no preconceptions about the outcome. For instance, Marino says that after he has created a new material for an office tower, he seeks applications for it in residential design. “If I only did private homes I’d go out of my mind, because it’s very hard after you’ve done 42 houses to say, ‘Gee, I wonder if I have a new idea,’ ” he explains. “But if I do a house and then a tower for Chanel and then a synagogue, I can’t wait to do another home because the other works give me a fresh new way of looking at a house again.”

For Chanel’s futuristic To­kyo flagship store, Marino employed a new plastic resin called Kinon to cover the walls. Because of the material’s rock-hard finish and scratch-resistant surface, he later applied it to the kitchen cabinetry of a Palm Beach estate. “Every new material has a variety of uses, some of them unexpected,” he says. In his projects, he also uses his own proprietary materials, such as a triple-polarized glass that blocks the glare from LED lighting and a new hybrid of lacquer-based paints.

“Unlike other architects, I’m more interested in getting a sensual response to my work rather than just creating theoretical architecture and looking for an intellectual response,” Marino says. “How can anyone possibly have the same solution for 10 different projects? I consider that the design of someone running on an empty tank of gas.”