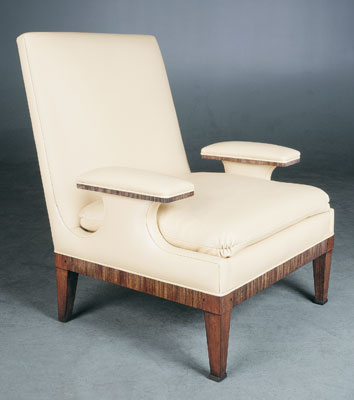 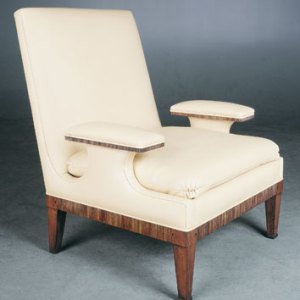 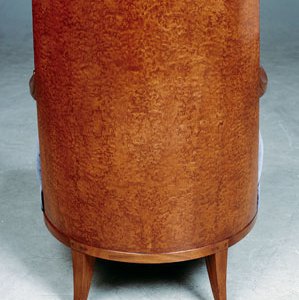 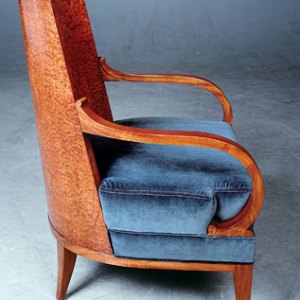 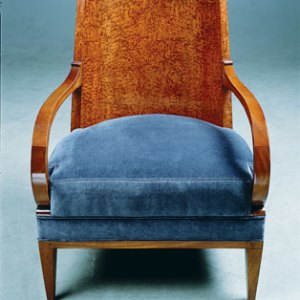 Although William Switzer & Associates did not realize it at the time, when fashioning reproductions of French modernist Lucien Rollin’s designs several years ago, the Canadian furniture maker was, in effect, auditioning for the chance to re-create the work of André Arbus (1903–1969), the French furniture designer considered one of the masters of the 20th-century Art Moderne movement. William Switzer’s Lucien Rollins Collection so impressed Yves Gastou, Arbus’ French dealer, and the late Madeleine Arbus, the designer’s only daughter, that they granted the firm the rights to Arbus’ designs, which incorporated style elements from the Louis XVI and Empire periods of the 18th and 19th centuries. Arbus’ pieces united parchment, lacquer, vellum, and finely grained veneers within a modern, streamlined frame.

“Empire was the biggest influence on him because of its regal design and the high quality of craftsmanship,” says Allan Switzer, William Switzer’s vice president and design director. “He took those pieces from the past and reinterpreted the essential elements—the hardware, the inlays, even the architecture of the pieces themselves—to create something entirely new.”

William Switzer has done much the same with Arbus’ designs. The company, which has factories in Spain and Canada, faithfully reproduces the dovetailed drawers, dowelled joints, bronze hardware, and elaborate marquetry of Arbus’ pieces. And, like the originals, the re-creations are made with exotic veneers, parchments, and animal hides. “We kept to his original drawings, so the architecture certainly speaks to his designs,” Allan explains. “But we also wanted to make the collection speak to the future rather than the past, so we revamped the scale and chose more contemporary veneers made from 47-year-old bobinga wood and mukaly frisé, which resembles the figured sycamore Arbus loved.”

William Switzer’s collection, which includes 26 pieces and will expand to 36 this fall, also uses contemporary neutral-colored wool moleskin and bouclé fabrics instead of tapestries. The upholstery includes saddle-stitched seams, fine French nailhead trims, and button tufting, all of which make it softer than that of the original pieces. The items with drawers include modern hardware instead of wooden glides, allowing the compartments to open and close more easily.

Evidently, Gastou has not objected to any of these updates. Indeed, as part of the licensing agreement, Gastou and the Fondation de France, a public interest group that oversees the Arbus estate, must approve each of William Switzer’s reproductions. “With Arbus you have a man whose work is widely known,” says Allan, “so anything with his name on it comes with an elevated level of expectation.”