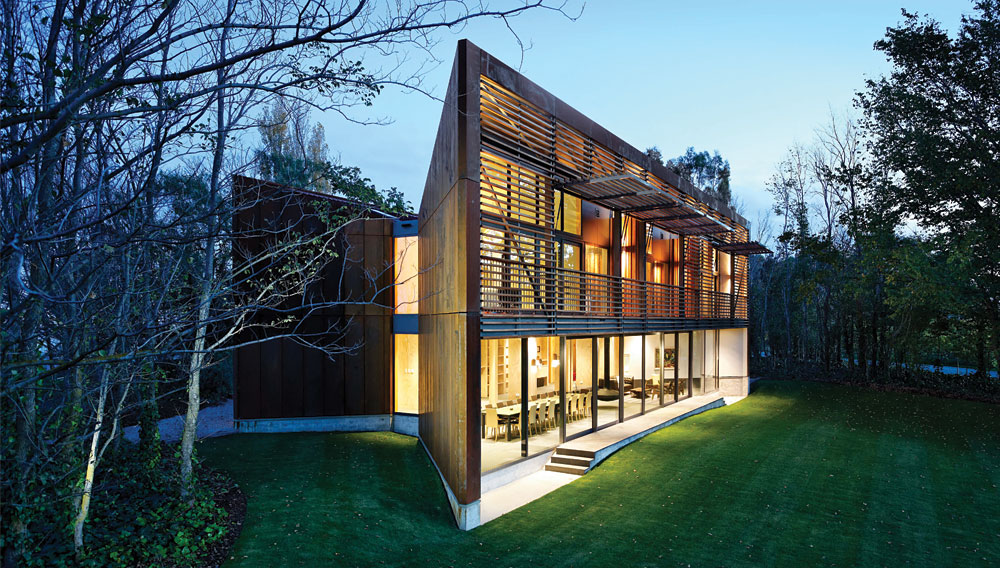 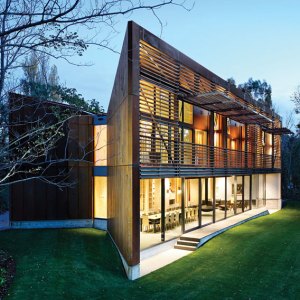 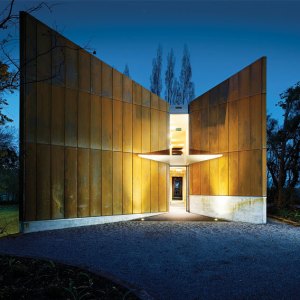 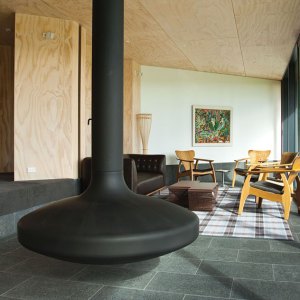 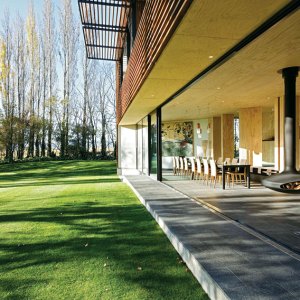 A New Zealand winery’s self-described shack—accommodations for invited guests only—is anything but primitive.

At the sound of the name, an invited guest of the winery might arch an eyebrow and think “A shack? Really?” but hope for the best. Those concerns are put to rest once the guest, upon approaching the property, sees this emerging from a coppice of trees: an angular, bow-tie-like structure made of weathered Cor-ten steel, concrete, and timber. It’s a shack in the same way that the opulent 19th-century summer mansions of Newport, R.I., were so-called cottages. “It’s quite a surprise, and deliberately so,” says Paul Rolfe, founder of the namesake architecture firm in Eastbourne, N.Z.

Guests enter through the residence’s front door and head off to the left. Walking past large wooden screens placed at various angles, they descend into a long, slim room that measures about 72 feet long and 11 feet wide and are hit full force by the beauty of the landscape before them—New Zealand’s Richmond Range, dominated by Mount Riley. “When you come to the front door, everything is kind of concealed,” says Tim Greer, of the Australian firm Tonkin Zulaikha Greer Architects. “As you go through the front door, the view is revealed.” The dividers play peekaboo with it, heightening its drama and impact.

And what would the name of this magnificent sliver of a room be? The Cloudy Bay Room? The Richmond Range Room? The Mount Riley Room? Wrong, wrong, and wrong again. It is the Living Area. The act of capitalizing the words seems almost comical, but the moniker is pure New Zealand. “Lack of pretension is rooted in the New Zealand psyche and reflected in the aesthetics,” says Greer, who is a New Zealander himself and a longtime friend of Rolfe’s. Together, the two architects pulled off a neat balancing act with the Cloudy Bay Shack. It is a home, but it is commercial as well; the beautiful vista that the shack is designed to frame appears on almost every bottle of Cloudy Bay wine. “Part of what we do is showcase the best of New Zealand,” says Ian Morden, Cloudy Bay’s estate director. It was he who insisted that the shack incorporate as many New Zealand furnishings as possible. “The people we host are sophisticated,” he says. “They don’t want to come to New Zealand and see the same furniture that they saw at the Milan Furniture Fair.”

More than 90 percent of the furnishings and fittings in the building are native, according to Morden, and New Zealand modesty shines forth in the living room in the form of the paneling material: local plywood. “It’s nothing fancy,” says Rolfe. “It’s very much in tune with the understated luxury [of the shack]. It was nice to take a relatively ordinary material and make an extraordinary space from it.” The rest of the room’s components are almost exclusively a New Zealand assemblage. The century-old weathered copper that tops the 20-seat dining table was salvaged from a library roof in Auckland. The local designer Tim Wigmore created the “pil” lights hanging over the dining table, and another local artisan, Nigel Whitton, made the oak armchairs in the lounge area. The tartan carpet was woven from New Zealand wool. The only exception to the New Zealand rule is a sizable one: The striking black steel fireplace was imported from France. In addition to neatly separating the room into two discrete areas, it can be rotated, allowing the sitters to aim the heat at the dining area or the lounge area.

“It really was the perfect piece. We had to find an excuse to use it,” Rolfe says, laughing. The dwelling’s designers justified its inclusion as a subtle nod to Cloudy Bay’s French parent company, LVMH.

Morden was initially skeptical of the extreme dimensions of the living room. According to Rolfe, he was “not totally convinced by the narrowness. He freaked out at one point: ‘I need it to be wider! I need it to be wider!’ He had to trust us with that.” Morden did, and his faith in Rolfe and Greer was rewarded. “The Shack was conceived as a box for viewing the wonderful view we have here,” he says. “The dimensions work well for creating an immediacy in the relationship with the Richmond Range landscape. It created a direct link to the outside. That’s how it was designed.”

Above the living room are three bedrooms, each with a nature theme: Mountain, River, and Cloud. (A fourth bedroom, the Cape Suite, a late repurposing of what was to have been a study and a guests’ work space, is on the right side of the building and does not have the same Richmond Range view as the other three.) The Cloud Suite is done up in heavenly white; the Mountain Suite features darker tones and wallpaper with antlers; and the River Suite recalls the former riverbed where the winery now sits. This trio shares a balcony partitioned by timber screens. All but one of the four bedrooms have beds built from native kauri wood, which is hard to come by nowadays; long ago, arriving islanders stripped the forests for fuel and shipbuilding. This kauri wood had to be reclaimed from swamps.

The Cloudy Bay Shack also signifies an act of reclamation. It replaces a previous guesthouse by the same name that burned down in 2009. The reincarnation was two years in the making, and the new residence sits on the former structure’s grounds but otherwise has little in common with it, at least physically. The old shack’s guest book, singed and salvaged from the flames, is displayed not far from the front door. Not much else survived the fire. But the old building’s most important element—the spirit of hospitality—has been carried over to the new and impressive building with the modest name. “The Shack is our home,” says Morden. “When you visit there, you come to our house. That’s what the [old] shack was. It’s a living, breathing, working building for us.”