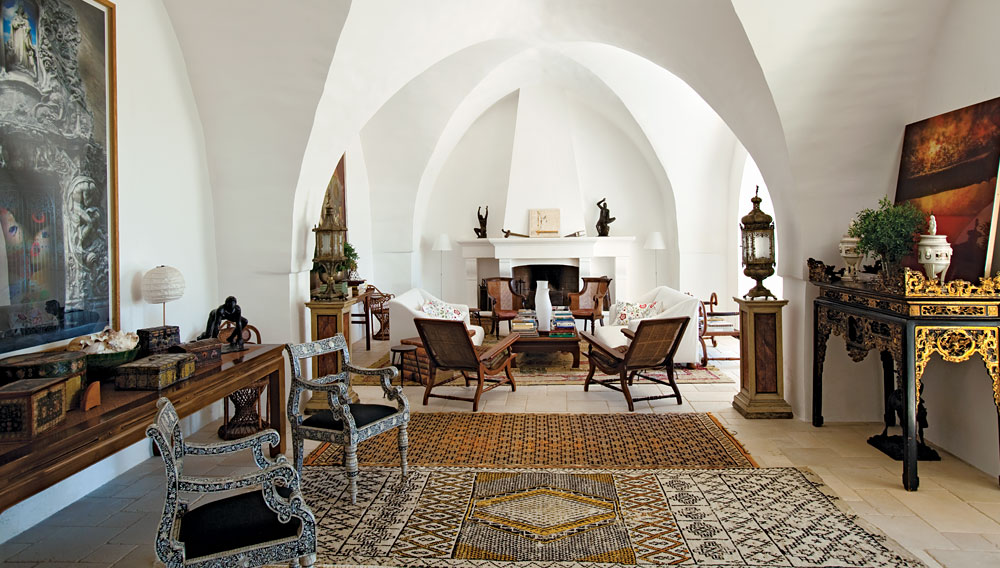 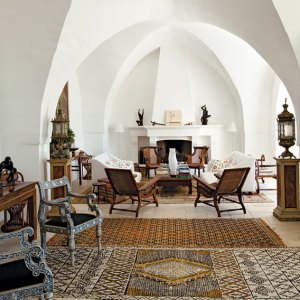 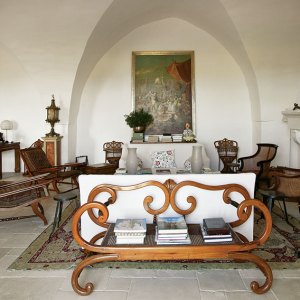 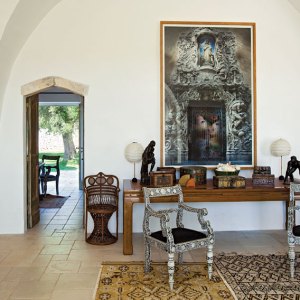 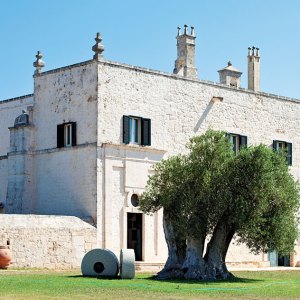 Masseria lamacoppa was not always the grand getaway that it is today. The architect Filippo Mondadori clearly recalls when his father, the late Leonardo Mondadori, bought the 17th-century manor house, which sits on 160 acres in southeastern Italy’s Puglian countryside. “At the time, a little more than 25 years ago, the region was relatively unheard of and everyone thought he was crazy,” says Mondadori. “The home had been abandoned for 80 years and was standing still in time with no electricity or water. I remember walking into what is now the living room and standing in grass that was 6 feet high.” But Leonardo had a vision, and so he set about remaking the neglected property as a family gathering spot—a low-key getaway with polished concrete floors and walls of stone from a local quarry. Six years into the project, he put in a swimming pool. He spent three months deciding on just the right spot for it—the middle of a field just beyond the main house—and the deliberation paid off. “The home is a great escape from city life,” explains Mondadori. “My father [a book publisher] would invite writers down here for a week and sort of slowly get them to publish something with him. Thomas Harris, Salman Rushdie—he even once got the pope [John Paul II] to write a book he had never intended to write, which turned out to be a huge success.”

Today success belongs to Masseria Lamacoppa. Mondadori and his brother, Francesco, inherited the estate nearly a decade ago, then spent five years refurbishing it and filling it with many of the European and Moroccan antiques and heirlooms the family had collected over the years. Though they still find themselves in residence on occasion (Mondadori divides his time between the Puglia property and his London home), they began several years back making the property available as a villa rental. And just this past summer, the compound received another upgrade: a 1,700-square-foot, three-bedroom guesthouse, located adjacent to the main structure, created by Mondadori himself.

For these new guest quarters, Mondadori renovated a stone structure next to the main house that had long remained vacant. “Layouts of homes in this area tend to be unusual, with room upon room flowing into each other—sort of like Versailles,” he jokes. “We wanted another space for guests that was more private, so we outfitted it with three bedrooms, a living room, and a kitchen. It’s a traditional red-facade home inspired by the 19th-century casinos in southern Italy.” Inside, the dwelling boasts a bright color palette, with reds, oranges, and yellows, and the same caliber of antiques—mostly from India and Morocco—that adorn the 10,700-square-foot, six-bedroom main house.

Guests travel down a long but otherwise unassuming private drive to reach the sprawling estate, which is nestled amid olive groves some 15 minutes west of the Adriatic Sea, not far from the baroque town of Ostuni. The seclusion afforded by the property, as well as the scarcity of upscale hotels in the Puglia region, tends to attract discerning visitors seeking an authentic experience. The region, located at the “heel” of the country’s boot, extends for 7,500 square miles, affording Masseria Lamacoppa’s guests proximity to sandy beaches along the Adriatic coast and to medieval villages with ornate churches and charming piazzas in the area’s interior. Back at the artfully decorated villa, guests can swim laps in the 82-foot-long pool, which connects to a 10-person hot tub, towel off in the adjacent pool house, work out in the gym, and relax in the hammam.

“People tend to think of the region as only a summer destination because of the nearby beaches,” says Mondadori. “But our family uses it year-round for holidays, gatherings with friends, and anytime we just need to escape.”

SETTING: A 17th-century compound set on 160 acres in the Puglia region of southeastern Italy, just outside Ostuni.

SLEEPING: Between the artfully appointed six-bedroom main house and the recently renovated three-bedroom guesthouse, the property can accommodate 17 guests.

STAFF: A cook prepares meals for the villa’s guests, and at least two other staff members provide housekeeping services and grounds maintenance.