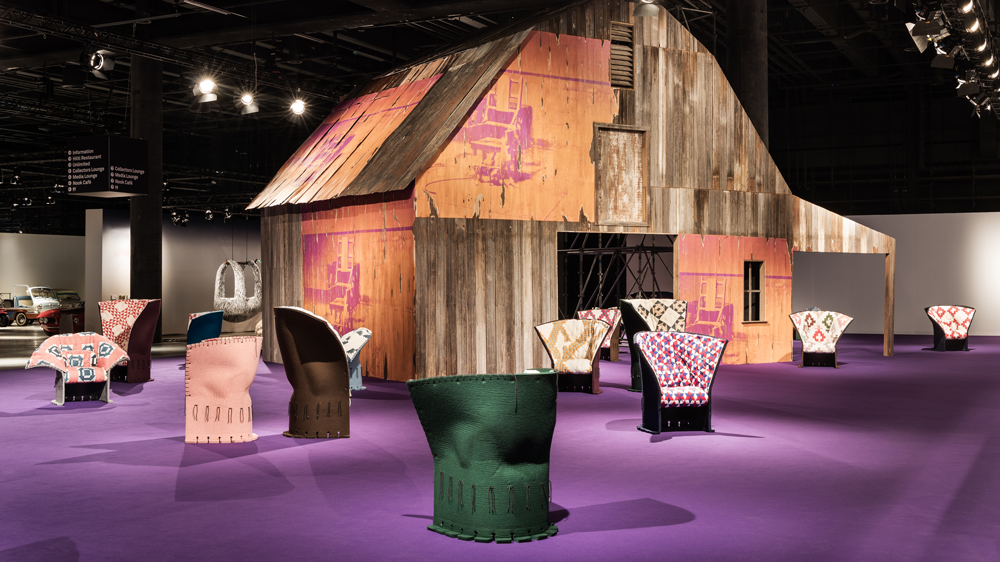 Raf Simons has something to say about design. The award-winning chief creative officer of Calvin Klein mined the cultural landscape (both literally and figuratively) at Design Miami/Basel this week; that’s where he presented a striking barn installation featuring a special selection of limited edition chairs by revered Italian brand Cassina. And that’s where he promised that things were not going to be frothy.

Simons – who is Belgian – stands at the helm of a classic American brand in Calvin Klein. While his vision for the company has been recognized during recent arrival (he is a two-time recipient of the Womenswear Designer of the Year award from the Council of Fashion Designers of America), he is also the kind of modern-day cross-disciplinary fashion designer, like Jonathan Anderson of Loewe, Stella McCarthy, and Tomas Maier of Bottega Veneta, who intuitively understands that creativity does not orbit one sun. With a strong foundation in history, art, music and design, creative limits are gone. No one has mastered this maxim with as much panache (or success) as Karl Lagerfeld.

Instead of the classic, spunky version of American style, Simons summoned two unexpected, but distinctly American totems—the barn and the handcrafted quilt—and then deftly placed an Italian furniture icon at the center of everything. Originally envisioned as a “throne,” Gaetano Pesce’s quirky, trailblazing Feltri armchair for Cassina defied the conventions of furniture-making 30 years ago—a point the company is rather proud of. “Cassina is a future-thinking company,” says Gianluca Armento, the Global Managing Director. “It represents ground-breaking architectural furniture; it represents change. We don’t make furniture with function and form only, but furniture that makes a statement and shows innovation.”

In 1987, when Feltri debuted, it was revolutionary for its construction and execution. “It was the first ever piece constructed only in fabric,” says Armento about the fabrication. “There is no wood, no metal, nothing. Feltri stands up thanks to fabric which is fixed or, stiffened by the application of a vegetable resin which enables it to stand upright.”

While it wasn’t an immediate commercial success, Feltri was a media hit, with its soft backrest and bend-to-your-wishes pliable design that literally surrounded the body and could be adjusted at will. Original ads for the piece showed people literally wrapped in the chair. “It’s an extraordinary piece of furniture that is like a shroud, like piece of clothing made of felt, which is one of the most ancient textiles knowns to humankind—that was the attractive power that this monumental armchair had on Raf Simons,” said Amento of the collaboration between both companies.

A design connoisseur and admirer of Gaetano Pesce’s, Simons reached out to Cassina and worked closely for several months on his Design Miami/Basel concept, which resulted in the creation of 50 limited edition and numbered Feltri chairs upholstered with one-of-a-kind heirloom Amish quilts Simons selected by hand. Dating from the 19th and early 20th centuries, the quilts are given a new and very graphic dimension when paired with the Feltri, Pesce’s own bright-eye experiment in form. The chairs were made in the exact same way, taking extra steps with the cutting and detailing of the upholstery. For Cassina, this collaboration offered the perfect opportunity to give Feltri the foxy upgrade it had yet to have, with six new colors for the external felt structure introduced to the series.

As vestiges of the past, the quilts reference the native, homespun traditions and craft history of the country—an image of early Americana design that is frequently frozen in museums. Simons presented these detailed, colorful artifacts the kind of modern context that the home-based quilters who originally sewed them could never imagine: An international (and very fashionable) art and design show in Switzerland. For his vision, Simons had an open-air barn installed, one of a few that were built for the Calvin Klein Fall 2018 runway show, as part of the fair’s scenography. The “upcycled” structure was constructed from 19th century reclaimed wood. The interior walls were dressed with large-scale images of Andy Warhol’s work, part of Calvin Klein’s partnership with The Andy Warhol Foundation for the Visual Arts.

For Simons—who wasn’t available to speak with us—refers to the Cassina collaboration and fair installation as “cultural correspondence,” and believes the entire presentation proves that cultural exploration can be artistic, substantive, and still push against the expectations of the seen-it-all design crowd.

All 50 of these limited edition Feltri chairs have been sold, with an additional 50 scheduled to be released through Cassina at a later date. “There was a wonderful and compulsive reaction to the chairs, it was quite a surprise,” says Armento. “I think this is also because the collectors who purchased a chair didn’t know if anything like this would be available again.”