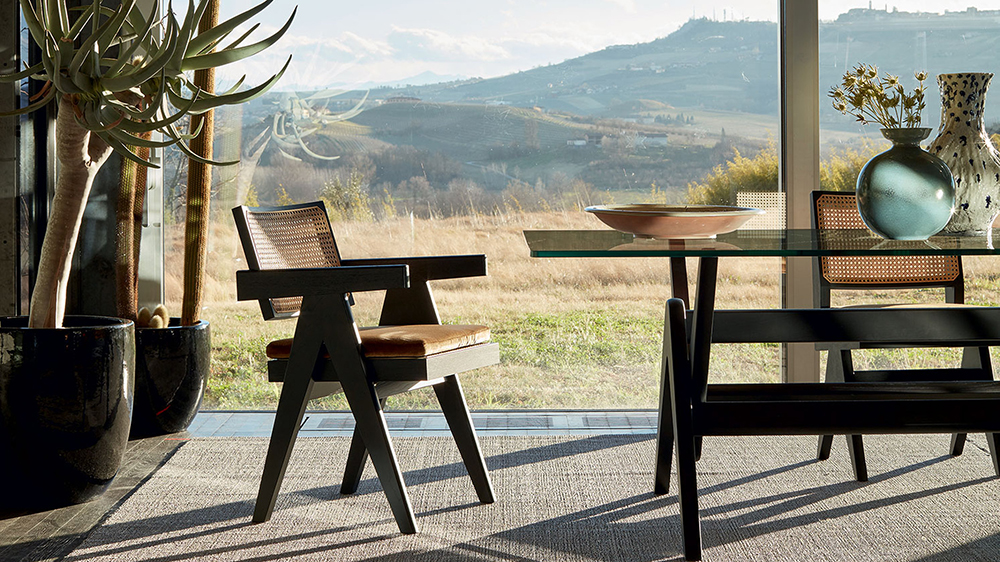 Since the 1950s, Swiss architect Pierre Jeanneret’s teak-and-wood furnishings have been used by aesthetes and interior designers to bring both comfort and elegance to a living space. Now, in celebration of Jeanneret’s work, Italian design firm Cassina is offering a modern range of some of his storied classics.

The collection, named Hommage à Pierre Jeanneret, features seven new home furnishings. Five of them, from an office chair to a minimalistic table, are named after the Capitol Complex building in Chardigarh, India, that is best known as the brainchild of modernist architect Le Corbusier. Jeanneret was his younger cousin and collaborator, and the Swiss-French architect asked him to design the furniture. His classic Capitol Complex chairs were one of several of his designs that went on to be produced by the thousands for the city.

The Capitol Complex chair, armchair and table from the collection.  Cassina

Cassina’s new collection also includes a “Civil Bench” which is inspired by a version Jeanneret created to furnish the homes of the city’s Legislative Assembly, as well as its own “Kangaroo Armchair” that replicates his famous “Z” shaped seating. Fans will notice the designer’s iconic upside-down “V” structures and crossed horn shapes in the line’s table and chairs. All of the designs are made with Burmese teak or solid oak.

For many, the use of Viennese cane in seat backs will be the biggest expression of Jeanneret’s aesthetic. The woven craftsmanship is typically done by hand and has been used in the design of wicker furniture, in places such as Vienna, since the 1800s. Cassina’s designs are manufactured at its carpentry workshop in Meda, in the northern Italian region of Lombardy.

According to Architectural Digest, “as people gravitated to more contemporary designs, discarded Jeanneret chairs piled up across the city…” They also claim that many were sold as scrap at local auctions. Decades later, dealers such as Eric Touchaleaume of Galerie 54 and François Laffanour of Galerie Downtown bought a few of the city’s “junked treasures” and showcased their restored find’s at Design Miami in 2017. Since then, Jeanneret’s designs have rocketed in value and piqued the interest of a fashion-savvy, celebrity clientele, such as Kourtney Kardashian, who reportedly owns at least 12 of his chairs. “It’s so simple, so minimal, so strong,” French talent Joseph Dirand told AD. “Put one in a room, and it becomes a sculpture.”

Jeanneret’s cult following has seen other brands wanting to bask in his glory: French fashion house Berluti debuted a rare collection of his furniture back in 2019 that had been reupholstered with vibrant, hand-patinated leather which gave them a Louvre-ready appearance. To explore the Hommage à Pierre Jeanneret collection, visit Cassina.com.