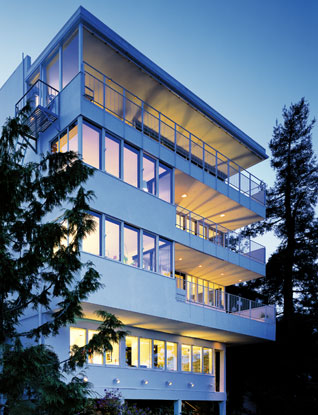 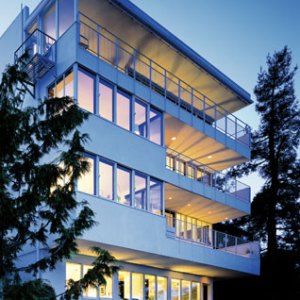 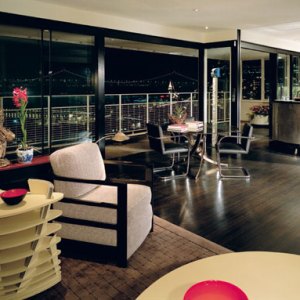 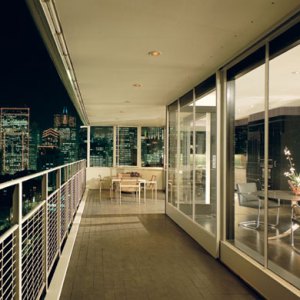 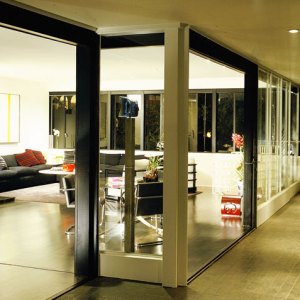 “Richard Neutra told me long ago that architecture must keep up with the times,” says David L. Davies, the owner of a taut, planar, white stucco house that Neutra designed in San Francisco. “When I bought the place in 1970,” recalls Davies, a former advertising executive, “I decided to subdivide it horizontally into two duplex units.”

Even though Davies intended to stay true to Neutra’s original materials, he was still caught unprepared when the architect dropped by, with no warning, to see the house. Completed in 1940 for financier Sidney Kahn, the four- story residence is poised on a crest of Telegraph Hill, where it offers stunning, panoptic views of the bay and its fabled Bay Bridge. Neutra evidently agreed with the planned subdivision. His pronouncement about keeping up with the times came shortly before he died in April 1970, at age 78.

Neutra had emigrated to Los Angeles from Vienna in 1925, with a stop off at Taliesin, in Spring Green, Wis., to work briefly for Frank Lloyd Wright. In Los Angeles, the young modernist architect found ready converts to the virtues of his functional open-plan homes in the robust community of artists, professionals, and business people drawn to the climate of Southern California. By the late 1930s, Neutra had worked his way up the coast to San Francisco, where the house for Kahn was his largest, and soon best-known, commission in the city.

The separation into two duplex units worked for more than 25 years. Then Davies decided to return it to a house for a single occupant—himself. He proceeded gingerly, as a virtual one-man landmark preservation commission. The original furnishings were no longer in place, and certain modifications needed to be made to update the house for his needs. Davies turned to Bromley Caldari, a sophisticated architecture and interior design firm based in New York, whose work he first encountered when he bought a Manhattan penthouse that the firm had remodeled for a previous owner.

The top floor of the San Francisco house would continue to be used as an entertainment room. Davies, an art collector involved in several San Francisco art institutions, frequently invites small groups of people to dinner. “He’s a perfect host,” says Scott Bromley, “who likes to cook.” The renovation attests superbly to the way in which the owner and designers respected the strong, clean lines of Neutra’s architecture. The 1,050-square-foot space is wrapped on two sides by bands of horizontal glass to give maximum views of the bay and bridge. A deep terrace, sheltered by Neutra’s trademark cantilevered roof, edges the south side. When Neutra began working on the design in 1938, Kahn asked him to make the top floor one large, open space where guests could wander inside and out and where they could watch movies on a large screen that dropped from the ceiling. “Both the client and the architect seemed to think they were in L.A.,” says Davies.

The projector and the screen are gone, along with the spacious bar that was paneled in dark wood and divided from the rest of the living area by a vertical wood tambour screen. To deliver meals to the top floor, Neutra had lined the elevator with shelves so that the food could be prepared in the kitchen on the street level, then carted up past the bedrooms on the middle level to the entertainment area. Davies thought it better to convert the bar into a service kitchen, but he still prefers to use the main kitchen for all messy culinary activities. And so the elevator still functions as a movable pantry. “We wanted a utilitarian kitchen that would be dramatic,” explains Bromley. “But it had to have that polished luster of the ’30s and fit in with the rest of the space, since it would be on view.”

Bromley came up with a sleek design for the kitchen, with quietly shimmering stainless steel cabinets edged with a crackled-glass backsplash, which adds a soft glitter to the room. He also replicated the tambour screen to seal off the kitchen from the living spaces, when desired. Wall-to-wall carpeting was removed, and the cross-grained oak floor was ebonized, to give the entire horizontal floor plane a sleek, dark sheen. A checkerboard carpet of wood fiber, made in Finland, has replaced the linoleum that once protected the service kitchen floor.

Neutra had covered the plaster walls in a light canvas that was very chic and modern in its time. Bromley Caldari and Davies felt that the white plaster walls would provide a more luminous backdrop. The steel frames of the windows and doors are now painted black—they had originally been white—to better frame the views. “We really studied Neutra’s work,” says Bromley. “While he would not have done exactly this sort of thing, we thought the black glossy floor and the black framing set off his architecture and updated his design. We feel he would have approved.”

Davies wanted furniture that would have the same crisp linearity of Neutra’s long-vanished pieces. Large club chairs from the late 1920s or early ’30s and Mies van der Rohe dining chairs from the same period are combined with new rectilinear sofas designed by Jeffry Weisman of Fisher Weisman Design in San Francisco.

Davies, who initially subdivided the house into two duplexes, returned it to use as a single home. His art collection includes glass pieces by Swedish artist Bertil Valien,

As an avid art collector, whose interests extend from Oceanic art to car hood ornaments, Davies proved to be a dream client by researching and finding things for the house. He even designed the long stainless steel dining table and its curvilinear chairs. (“My first and last effort,” he says.)

One piece of furniture, a swirling white wood end table, has an ironic provenance. It was designed by Charles Jencks, an architectural historian and critic famous for giving the name “postmodernism” to the historically referential style of architecture that sprang up in the 1970s. Jencks, an American who has long lived in England, finally agreed to let Davies reproduce one table if Jencks’ own joiner could craft it. So now a piece of furniture by the man who helped overthrow (for a short time) the modernism that Neutra so ardently espoused is represented in one of his landmark houses. But perhaps Neutra would approve. After all, as he remarked, architecture—and design—should keep up with the times.