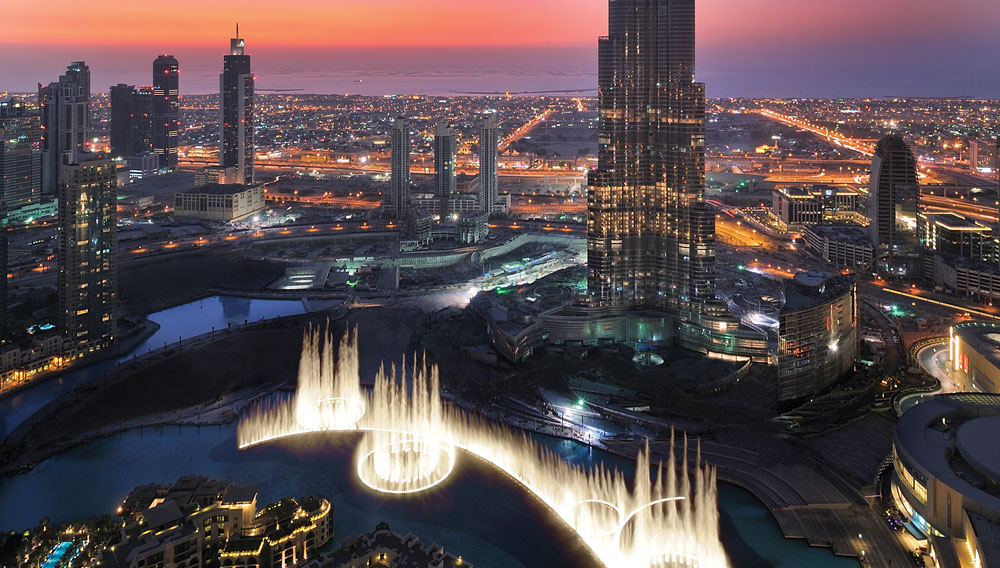 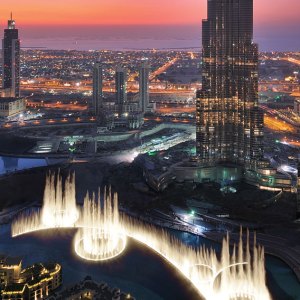 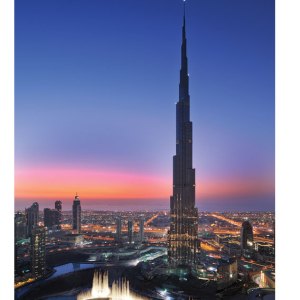 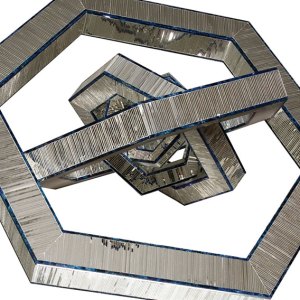 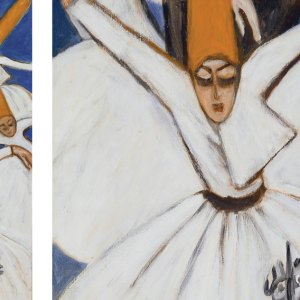 Dubai’s urban legend during the early-2000s construction boom was that a quarter of the world’s cranes were at work in the city. After recent fallow years of stalled projects, Dubai is gearing up again, with a host of new developments rising alongside the ultramodern structures that already define the skyline. Here, superlatives are almost a prerequisite for any project—tallest, largest, most expensive—and the result is a place that strains credulity with its own idiosyncratic style. Coexisting with this new Dubai is the older sector of the city, a trading hub where dhows dock near tankers and shoppers barter in the souks. The mash-up of old and new, of rich tradition and unbridled excess, promises to surprise and delight style seekers. [Karen Cakebread]

The world’s tallest building, the 2,716-foot Burj Khalifa, rises like a telescoping needle from its Downtown Dubai location, but for the architect—Adrian Smith, of Chicago’s Skidmore, Owings & Merrill—inspiration came from a desert flower’s lobes unfurling from a stem. Another noteworthy Skidmore building in Dubai, the Infinity Tower, twists 90 degrees from base to top. Skyscraper design is competitive here, with each new tower vying for stares. Contributors to the skyline include London’s Foster and Partners (the award-winning Index building) and Atkins Middle East (the Almas Tower, housing the Dubai Diamond Exchange and other gem-related businesses). www.burjkhalifa.ae

Contemporary Middle Eastern art is on display annually at the Art Dubai show, where participants include local galleries such as the Third Line. Christie’s, based in the Dubai International Finance Center, holds a number of auctions throughout the year, including the Modern and Contemporary Arab, Iranian, and Turkish Art event in April. The auction house holds world records for Middle Eastern artists in several categories, including the highest price paid at auction for a painting by an artist from the Arab world, for Mahmoud Said’s The Whirling Dervishes, which sold for $2.5 million in 2010. Art Dubai, www.artdubai.ae; Christie’s, http://www.christies.com/; The Third Line, www.thethirdline.com

Whether or not the islands of Palm Jumeirah and the World are sinking—a topic of much debate—there is no denying that these land-reclamation developments in the Arabian Gulf continue to fascinate. The Palm’s trunk (with a monorail), 17 fronds, and outer crescent are designed to maximize the water frontage available for home buyers; the development doubled the shoreline of the Emirate of Dubai when it was completed in 2006. The first phase, of 4,000 properties, sold out in 72 hours, and residents hail from more than 70 countries. The mixed-use community includes villas, apartments and townhomes, retail and recreational facilities, and an Atlantis resort. A few miles down the coast are the 300 islands of the World, geographically complete but mostly undeveloped except for a beach club occupying Lebanon Island, a 419,000-square-foot island that changed hands in November 2012 for $9.5 million. www.nakheel.com

The home of the world’s richest horse race, the Dubai World Cup, the Meydan track is flanked by a grandstand that holds 60,000 spectators; its cantilevered roof represents the wingspan of a falcon, the traditional Bedouin hunting partner. Receiving barns are located at one end of the mile-long structure, and a marina abuts the other end. In between, the stadium, designed by Malaysia’s TAK Group, also holds the trackside Meydan hotel, a museum, and an IMAX theater. Hosting the spring’s annual Dubai World Cup is the emirate’s ruler, Sheikh Mohammed bin Rashid Al Maktoum, who breeds and races Thoroughbreds. www.meydan.ae

Owned by the government of Dubai, Emirates is tightly linked to the fortunes of its hometown. While the corporation operates desert safaris and other tours through its Arabian Adventures subsidiary, it is best known for providing a premium flight experience. First-class cabins in its Airbus A380s (Emirates is one of the largest customers for this aircraft) offer passengers showers, private suites with sliding doors, and a bar. Dishes like stir-fried fresh lobster are served on Royal Doulton bone china. At the Dubai airport, Emirates’ vast first-class lounge offers waiting passengers three design themes—Arabian, Mughal, or Asian—a wine cellar, and a spa. www.emirates.com

The contrast between old and new Dubai is clear when it comes to shopping. In the older part of the city, windows in the gold souk are crammed full of jewelry priced by weight, while the spice souk beckons with its obstacle course of bins redolent of Middle Eastern aromas. Meanwhile, shoppers can find paradise in some of the world’s grandest shopping centers. The Dubai Mall features 1,200 retailers—from Christofle and Porsche Design to Ermenegildo Zegna and Versace Home—as well as an Olympic-size ice rink, an aquarium, and an outdoor fountain that projects enough light to be visible from orbiting spacecraft. More spectacle is in the planning stages with the Mall of the World, part of the recently announced Mohammed bin Rashid City megadevelopment on Dubai’s outskirts. www.thedubaimall.com

BURJ AL ARAB   This hotel inhabits Dubai’s most recognizable landmark: a soaring tower with a sail-shaped facade of Teflon-coated woven glass fiber. All guest rooms are two-story suites—decorated with mosaics, heavy silks, and 22-karat gold—by Khuan Chew’s design team at KCA International. The style is a kaleidoscopic Arabian Nights fantasy, with embellishments ranging from handmade carpets and stained-glass windows to mosaic tile murals. The hotel’s Al Mahara restaurant presents seafood dishes to diners in a space dominated by a massive aquarium. ($2,723 to $19,057) +971.4.301.7777, www.jumeirah.com

ARMANI HOTEL DUBAI   Giorgio Armani’s first hotel, which opened in 2010, occupies the concourse up through level eight, as well as levels 38 and 39, of the Burj Khalifa. Infusing this Downtown Dubai destination is Armani’s signature clean-lined elegance, from the Armani Casa furnishings and fabrics to the restaurant menus. The property’s neutral color scheme creates a soothing oasis in the bustling desert city. (From about $1,200) +971.4.888.3888, dubai.armanihotels.com

RAFFLES DUBAI   The pyramidal structure of Raffles Dubai, conceived by the architect Bryn Lummus of Australia, contains, among other spaces, a 2.5-acre botanical garden. People by Crystal, the nightclub occupying the 18th and 19th floors, has a 360-degree view and is one of the city’s largest and trendiest nightclubs; live acts and celebrity DJs perform while confetti rains over a dance floor flanked by white-leather banquettes and gold walls. ($216 to $12,251) +971.4.324.8888, www.raffles.com

DAR AL MASYAF   The most exclusive of the three lodging choices at the sprawling Madinat Jumeirah resort, the Dar Al Masyaf suites are scattered throughout houses built in the local vernacular, with decorative wind towers whose functional counterparts traditionally have been used to catch the winds and cool dwellings’ interiors. Guests can ride boats called abras along the property’s canals or shop and dine in the labyrinthine Souk Madinat. (From $410) +971.4.366.8888, www.jumeirah.com

JW MARRIOTT MARQUIS DUBAI   Naturally, Dubai has the world’s tallest hotel: the JW Marriott Marquis. Tower 1 opened in February, with 72 stories and 804 rooms and suites; the second is scheduled to open in 2014. The towers were designed by Archgroup Consultants to evoke the trunks of date palms. Highlights include 14 restaurants and bars, and an expansive pool deck on the seventh floor. (From $205) +971.4.414.0000, www.jwmarriott.com [K.C.] 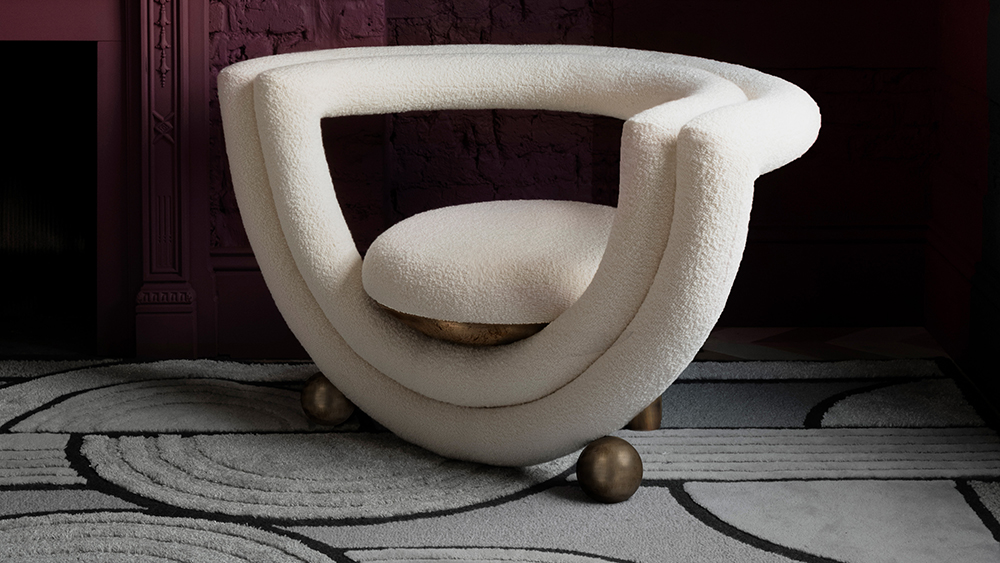 Home Design From Arched Armchairs to Circular Mirrors: 5 New Home Furnishings That Are Ahead of the Curve
ad