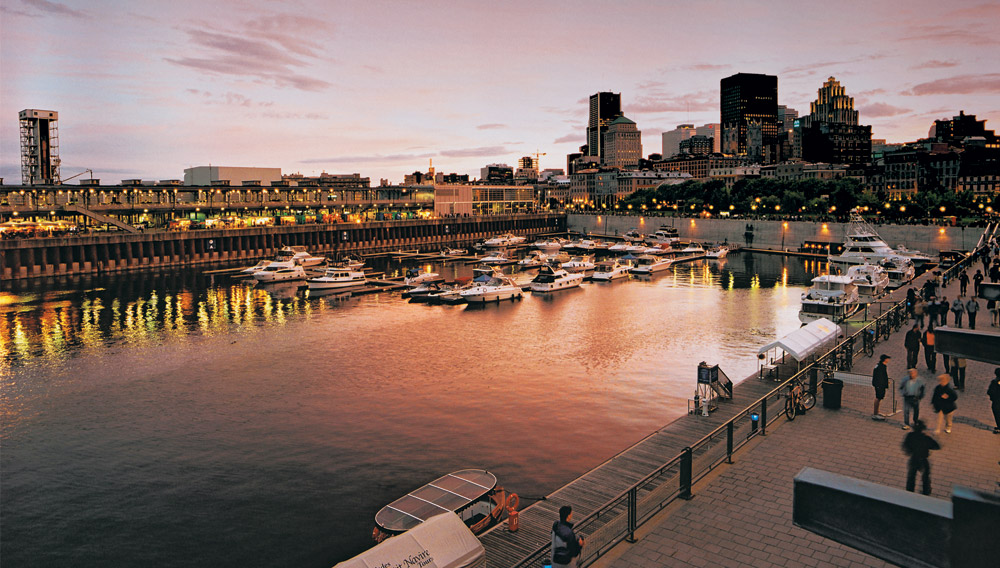 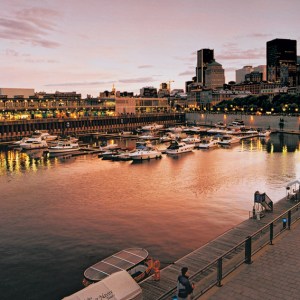 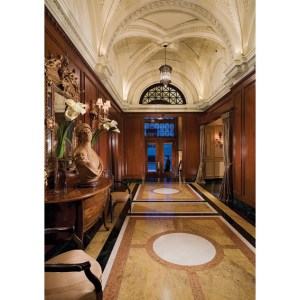 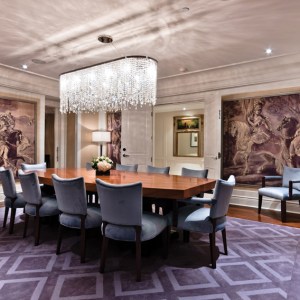 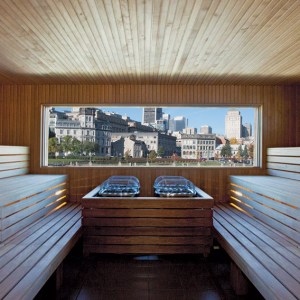 To describe Montreal as a North American city with a British background and a French varnish is to oversimplify its complex nature. On this island city where the Ottawa and St. Lawrence Rivers meet, the downtown core is bordered roughly by Old Montreal, with its limestone edifices and cobblestone streets, and Mount Royal, whose elevation determines the height of all new construction (buildings are limited to about 51 stories), with people of more than 120 ethnicities residing in the avenues of the surrounding districts. Residents cling tenaciously to their Frenchness, using the language to protect their Quebecois culture, at the same time as they embrace new urban-design trends—both cutting-edge and quirky—such as digital lighting in public spaces and striking graffiti murals. Montreal was named a UNESCO City of Design in 2006 for prioritizing architecture and design that benefit all of its citizens, in manifestations as basic as its bike-sharing system and as overarching as the way it converted the Expo 67 World’s Fair grounds into a multifunctional recreational and residential area that is still well used nearly 50 years later. This collective joie de vivre translates to satisfying discoveries for visitors who happen upon Montreal’s many surprises.

This European-style hotel in Old Montreal was originally the Merchants Bank building in the 19th century, and the basement vault now houses a spa. A local family purchased the building in 1997 and spent years shopping for furniture and art in Europe before opening the 60-room property (predominantly suites) in 2002. The penthouse suite, accessed by a private elevator whose bronze doors came from the first Waldorf Astoria, is a study in opulence, cloaked in Italian hardwood and green Chinese marble and commanding views from a spacious terrace. At XO Le Restaurant, which is bedecked with mezzanines and alcoves, diners savor local fare with a French Canadian twist, such as Tartare and Rockefeller (seared beef and oysters) or maple-glazed piglet. 514.841.3111, www.hotellestjames.com

The first Ritz-Carlton opened here in 1912 to welcome the carriage trade, and the grande dame’s glitterati have ranged from Queen Elizabeth II to Elizabeth Taylor, who married Richard Burton in the hotel’s Royal Suite. In 2012, after closing for a four-year, $200 million renovation, the property reopened to reveal a new residential wing and a restaurant from chef Daniel Boulud. The architecture firm Provencher Roy retained the building’s classic facade and Palm Court while modernizing the 96 rooms and 33 suites and adding a rooftop saltwater pool. 514.985.0464, www.ritzmontreal.com

Moored in the Old Port, a former ferryboat serves as the funky framework for this full-service spa. Sid Lee Architecture overhauled the five-level structure but retained some maritime elements: portholes (some large enough to sit in), calming relaxation spaces in shades of black that contribute to a sense of submersion, and upper decks that open up to the sounds of the port and views of the St. Lawrence and the city skyline. Among the many treatment options are a massage with live harp accompaniment, and a Nordic bath circuit that takes the recipient from a heated sauna to a cold pool. 514.284.0333, www.botabota.ca

A few blocks from Hotel Le St-James is a different spin on a 19th-century mercantile building turned hotel. The carved-limestone exterior is typical of Old Montreal, but the interior is modern. In the 30 rooms and suites, polished concrete floors are heated in the bathrooms; elsewhere they are warmed visually by the light from massive windows and by the light oak walls of built-in cabinets. Furniture is in the styles of Eames, Bertoia, and Paulin, task lighting is by Artemide, and bath fixtures are by Duravit and Arne Jacobsen. 514.904.1616, www.hotelgault.com

The venerable jewelry house originated in Montreal in 1879, and the company’s new Muse collection (barrel pendant and pearl-and-gold bracelet shown) is patterned after the geometric design on the ceiling of the original Birks store. The diamonds in Birks’s own jewelry designs are sourced from Canada, so they are conflict free, and each of the solitaire stones is etched with a maple leaf and numbered for traceability. The 20,000-square-foot flagship store on Saint Catherine Street also has a popular café that serves afternoon tea, cocktails, and lunch. The Birks Group operates about 50 jewelry stores in North America and plans to open more around the world, beginning with China in the coming year. 514.397.2511, www.maisonbirks.com

This artful store in the Mile End neighborhood meets the needs of serious cooks. The inventory of cookware is as carefully curated as a gallery show, with pots and pans by Demeyere and Le Creuset displayed only in earthy colors that help impart a relaxed atmosphere to the shop. Among the pantry items is DeSève maple syrup, a Quebec product that is made from centuries-old trees; using 50 liters of sap (instead of the customary 40 liters) yields 1 liter of organic liquid gold. The store hosts thrice-weekly workshops with top local chefs, as well as gourmet trips. 514.278.0008, www.lestouilleurs.com

One slice of 18-karat gold or sterling silver is the sole component of each piece of jewelry produced by Roland Dubuc. He experiments with a paper prototype before making a cut in a plain sheet of metal, in part to minimize waste. “The job of a jeweler,” Dubuc jokes, “is to be economical.” The full range of his works, from statement necklaces of feathery cascading silver to gold earrings shaped like twisted linguine (sterling-silver bracelet shown), is on display at the atelier in Old Montreal, and select pieces are also available through Aaron Faber in New York City. 514.844.1221, www.rolanddubuc.com

Downtown’s entertainment district draws crowds day and night to its array of indoor and outdoor festivals and diversions. Luminothérapie, one such event, is an annual competition for the creative use of light in installations and in projections onto the surrounding architecture. Last winter’s display, shown above, consisted of pathways of flexible stems as a metaphor of a rural Quebec wheat field. 514.879.0009, www.quartierdesspectacles.com

Canada’s first (and largest) museum dedicated to contemporary art is located in the Quartier des Spectacles and observes its 50th anniversary next year. It holds 7,816 works by Canadian artists such as Paul-Émile Borduas, a noted abstract painter from Quebec, and artists from outside Canada, including Richard Serra and James Turrell. The museum’s exhibitions depict modern cultural currents, as seen recently in Beat Nation: Art, Hip Hop and Aboriginal Culture (shown: Jingle Boots, 2011, by Maria Hupfield) and Pulse Room, in which a computer interface converts visitors’ heart rates into the flashes of hundreds of lightbulbs. 514.847.6226, www.macm.org

Montreal’s design show, now in its 26th year, is the largest in Canada and takes place over four days each May. The 300-plus exhibitors represent residential design in all forms: interiors, landscaping, furniture, and architecture. The Francophile city has a history of openness to new design trends, especially European ones, and attendees can see contemporary releases through a Quebecois lens. Past exhibitors have included Italy’s Flowerssori (children’s furniture in sync with Montessori teaching methods) and Canada’s Chapiteau National (portable, temperature-controlled domes). 450.651.3630, www.sidim.com

An 83,000-square-foot shipyard complex from 1846 reopened in 2012 as a showcase for contemporary Canadian and international art. Its vastness also means it was able to accommodate the lengthiest of runways when it hosted Montreal Fashion Week. The venue is just part of the massive conversion of the Griffintown neighborhood from an industrial sector into an innovation district, with a booming housing market and streets blossoming with new restaurants and galleries. 514.931.9978, www.arsenalmontreal.com

Sound and digital-production studios share space with event venues in another of Old Montreal’s stone edifices. The arts patron Phoebe Greenberg was behind the restoration of the 1861 warehouse into the multiuse site, which opened in 2012. Next Floor, which documents the construction project, won a Best Short Film award at the 2008 Cannes Film Festival. 514.225.0525, www.phi-centre.com

When Montreal hosted the 1967 World’s Fair, called Expo 67, the event marked not only Canada’s centennial but also a turning point in the city’s appearance and identity.

Mayor Jean Drapeau decided the fair should be sited on islands in the St. Lawrence River, so he had an existing isle enlarged and an artificial one built. The landfill for this undertaking was excavated from another project—the Montreal Metro. Far more than a subway network, the downtown public-works project now consists of 20 miles of subterranean corridors lined with some 2,000 stores, linking offices and residential buildings to Metro stations, hotels, and convention centers.

This World’s Fair “pavilion” was the brainchild of the architect Moshe Safdie, whose structure of modular concrete blocks—then a prospective model for affordable housing—has had a lasting presence. Now considered a desirable address, Habitat 67 encompasses 146 variously sized residences, each with views on three sides from a private terrace on the roof of the unit below. Recent listings have included a two-bedroom home for $596,000 and a three-bedroom penthouse for $1.85 million. 514.866.5971, www.habitat67.com

The landmark geodesic dome, designed by the American inventor R. Buckminster Fuller, served as the U.S. pavilion for Expo 67. When it opened, one of the dome’s attractions was the world’s longest escalator, which carried spectators upward to an exhibit about the Apollo space program called “Destination Moon”—a goal that would not be realized for another two years. The Biosphere is now an environmental museum, which will close for renovations this fall. www.ec.gc.ca/biosphere

Canada’s largest casino has been in the business of gaming only since 1993. Originally the France pavilion, the nine-story building from the architects Jean Faugeron and André Blouin is built of concrete and steel, with walls of glass and exterior aluminum stripping to break the heat from the sun. The gambling complex also incorporates the former Quebec pavilion, and the casino is notable mainly for its unusual design features, such as the windows. 514.392.2746, www.casinosduquebec.com

During one weekend in June, Île Notre-Dame transforms from a bucolic island park, peopled with joggers and canoers, to one of Montreal’s loudest locales when it hosts the Formula 1 Grand Prix. Drivers blast through 70 laps on the 2.7-mile course that is notorious for the wall edging the final chicane, which reads “Bienvenue au Quebec” and has been the site of several race-ending crashes for previous F/1 champions, leading to its nickname, “The Wall of Champions.” www.circuitgillesvilleneuve.ca