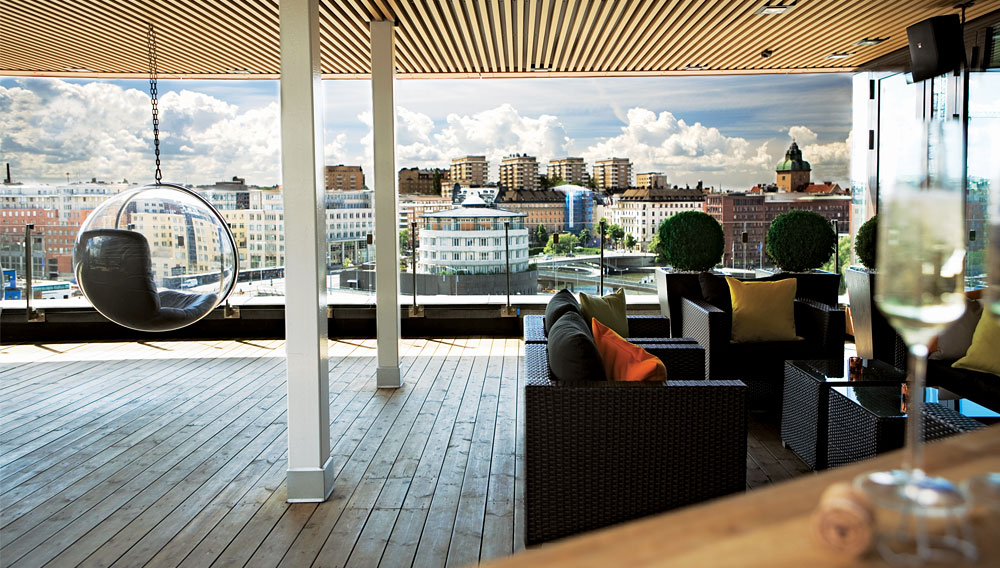 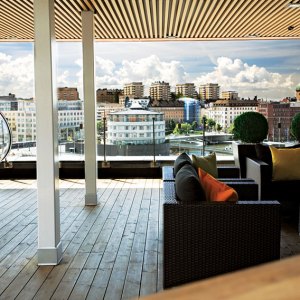 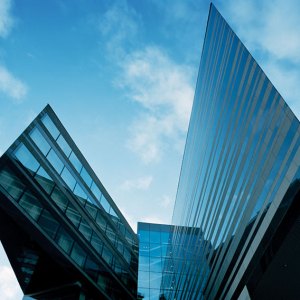 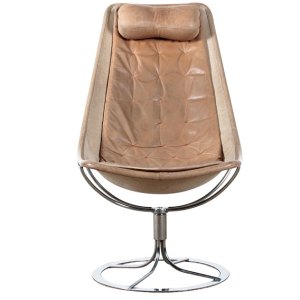 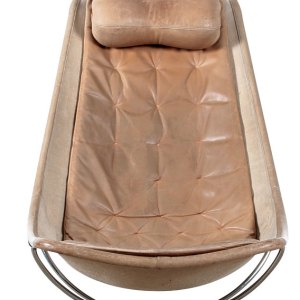 Sweden’s leaders of midcentury modern design, from the late architect and furniture designer Bruno Mathsson to the international furnishings brand Ikea (a privately held Dutch corporation with Swedish origins), earned the Scandinavian country attention as a hotbed of design. Today that reputation still holds true, thanks in part to the tastemakers featured on the following pages. Year-round their creations enliven the 14 islands that compose Stockholm, though the capital city seems to truly light up in September, when many residents return after spending the warmer months in summer retreats on the thousands of islands in its archipelago. And it is in February, as the city hosts Stockholm Design Week, the Stockholm Furniture Fair, the Northern Light Fair, and Market (www.stockholmfurniturefair.se), that the style-minded destination shines brightest.

Stockholm’s largest hotel, with 558 rooms, pays tribute to Scandinavian design with a facade from Wingårdh Architects and interiors with furnishings by Alvar Alto, Arne Jacobsen, and Bruno Mathsson. A rooftop pool and spa overlook the city. From $219 nightly. +46.8.676.98.00, www.clarionsign.com

After seeing Matbaren and Matsalen, Mathias Dahlgren’s restaurants at the Grand Hôtel, Jeanette Mix hired their designer, the London-based Ilse Crawford, to create the interiors of her own hotel. Ett Hem, which opened in 2011 in a former private home, has just 12 rooms, each with a unique design. The Arts and Crafts–style building also has a gym, a restaurant, and a courtyard garden. From about $580 nightly. +46.8.20.05.90, www.etthemstockholm.se

When Claesson Koivisto Rune was tasked with transforming a six-story office building into this 201-room hotel, the firm’s first order of business was getting rid of the 1970s-era chandelier. But after having its 10,000 glass pieces cleaned, the company elected to keep the piece, which hangs like a jewel in the atrium lounge (shown). The atrium is next to the cocktail lounge, where a bar of backlit onyx dazzles guests. From about $290 nightly. +46.8.614.1000, www.nobishotel.se

The grande dame of Stockholm’s five-star hotels comprises 300 guest rooms that are distributed across three buildings, two of which were added to the property since its 1874 opening. Combining Swedish-style accommodations (chevron floors, Gustavian furnishings) and modern public spaces, the waterfront hotel features a spa (shown) that highlights Nordic bathing rituals, such as following sauna time with a cold-water plunge. From about $550 nightly. +46.8.679.3500, www.grandhotel.se

No sign, a hard-to-find entrance, and a tucked-away restaurant and bar have made this establishment popular with celebrities and rock stars who want to hide out. Of the 5-year-old property’s 45 rooms, no two are alike. Walls in the hotel’s gallery-like public spaces and in the accommodations display contemporary artworks that are available for sale and rotate every few months. From about $535 nightly. +46.8.22.31.60, www.lydmar.com

Fire is the dominant element at the Swedish celebrity chef Niklas Ekstedt’s restaurant, where all the cooking takes place over an open flame. Rustic wood tables and chairs and industrial metal accents and lighting also add sparks of ambience to the space. +46.8.611.12.10, www.ekstedt.nu

When it opened in late 2010, this restaurant electrified Stockholm’s dining scene with its modern approach to traditional Swedish ingredients. Volt’s dark, minimalist interiors serve as a clean backdrop for dishes that often resemble abstract works of art. +46.8.662.34.00, www.restaurangvolt.se

In addition to enjoying international haute cuisine, diners at this formal restaurant are treated to a design scheme by the Swedish firm Claesson Koivisto Rune. Original wall paintings, gilded oak panels, and ornate chandeliers share the elegant space with tables, chairs, and large mirrors that lend a modern air. +46.8.676.58.00, www.operakallaren.se

London’s Ilse Crawford has left her imprint on Mathias Dahlgren’s two restaurants at the Grand Hôtel (page 93), which between them have three Michelin stars. The red chairs, wood tables, and open kitchen at Matbaren (shown) reflect the eatery’s casual nature, while the palette of muted beiges, greens, and blues at Matsalen set a more formal tone. +46.8.679.3500, www.grandhotel.se

The flagship store for Sweden’s most globally recognized fashion brand is located within a former bank. (The building was the site of the 1973 heist that led a Swedish psychiatrist to identify a phenomenon he called Stockholm Syndrome—a hostage’s identification with his or her captor.) The bank’s large marble pillars remain, but elsewhere the space is spare and contemporary, with floor-to-ceiling cubbyholes for denim and racks of color-coordinated, avant-garde styles for men and women. +46.8.611.6411, www.acnestudios.com

Founder Alexander Stutterheim’s fisherman grandfather wore a traditional raincoat that inspired the brand’s four rubberized versions ($315 to $1,295). Stutterheim has updated the classic 1960s design with modern technologies, such as watertight double seams that can withstand a downpour. Each coat is made by hand at Sweden’s only remaining textile factory. +46.734.33.40.65, www.stutterheim.com

Located in an old brewery from the 1840s, the atelier and design studio for this popular men’s and women’s fashion and accessories brand handcrafts most of its pieces. The 9-year-old company has three stores in Sweden, including a 200-square-foot shop adjacent to the atelier, as well as the two-story flagship in the heart of Stockholm. +46.8.21.48.08, www.vave-shoerepair.com

The fragrance house’s simply elegant perfume bottles—designed by Byredo founder Ben Gorham—hold a range of unique scents ($145 to $220) with names like Gypsy Water, Mister Marvelous, Pulp, and Sunday Cologne. Although the full line of 32 fragrances—in perfume, candles, body wash, and soap—is available at Barneys in the States, monogramming of Byredo’s leather travel cases ($120 to $265) for its 12 ml perfumes is offered only at the company’s Stockholm store. Incidentally, the city’s venerable home-goods shop Svenskt Tenn is the place to find Byredo candles with fragrances not available elsewhere. +46.8.525.026.10, www.byredo.com

Contemporary art is among the creative influences behind this 14-year-old brand’s urban, tailored line of ready-to-wear fashions. Whyred’s three  founders include the grandson of Sven “X-et” Erixson (1899–1970), one of Sweden’s most famous modern painters, who once revealed in an interview that his favorite color was red. When he was asked by the interviewer, “Why red?” he replied, “Well, blue then.” +46.8.660.01.70, www.whyred.se

Founded in 1924 by the Swedish decorative artist Estrid Ericson, the city’s renowned home-goods shop offers everything from furnishings and tableware to textiles and accessories. Pieces range from traditional and ornate Scandinavian objects to more streamlined midcentury designs that are still made today. +46.8.670.16.00, www.svenskttenn.se

Form Us With Love

The collaborative design studio partners with international brands like the Poltrona Frau Group’s Cappellini (Lace Metal lamp shown) to create products that range from innovative lighting to playful tabletop items, such as a thermos that looks like a lighthouse, bowls that look like boats, tongs that look like oars, and salt and pepper shakers that look like buoys. +46.8.218.002, www.formuswithlove.se

The internationally known product designer combines organic forms with modern technology to create such well-received pieces as Lei, the first ergonomic office chair designed specifically for a woman, the Alone easy chair for Poltrona Frau, and Cloud (shown), a portable room that inflates to about 150 square feet and deflates for stuffing into a bag. +46.8.611.22.09, www.monicaforster.se

Evoking a Tony Duquette kind of maximalism rarely found in the city, this antiques shop carries a mix of global finds handpicked by owners Tony Andersson and Thomas Rehn, who also work as interior designers. +46.8.663.34.51, www.rehnsantikhandel.se

Furnishings and decorative objects are among the offerings of this self-described “publishing house” of Scandinavian design. Rather than seek out designers to create specific pieces, the company invites artists to come forward with their ideas (Fredrik Färg’s Rock Chair shown). The firm works with more than 70 designers. 877.884.0226, www.designhousestockholmusa.com

Since the 2006 release at the Salone del Mobile in Milan of their three-piece Animal Thing series (Pig table shown), the three designers behind Front have garnered international attention. Projects have included lamps for Ikea, a magazine rack for Kartell, wooden tables for Moroso, and, most recently, showerheads for Axor. +46.8.710.01.70, www.designfront.org