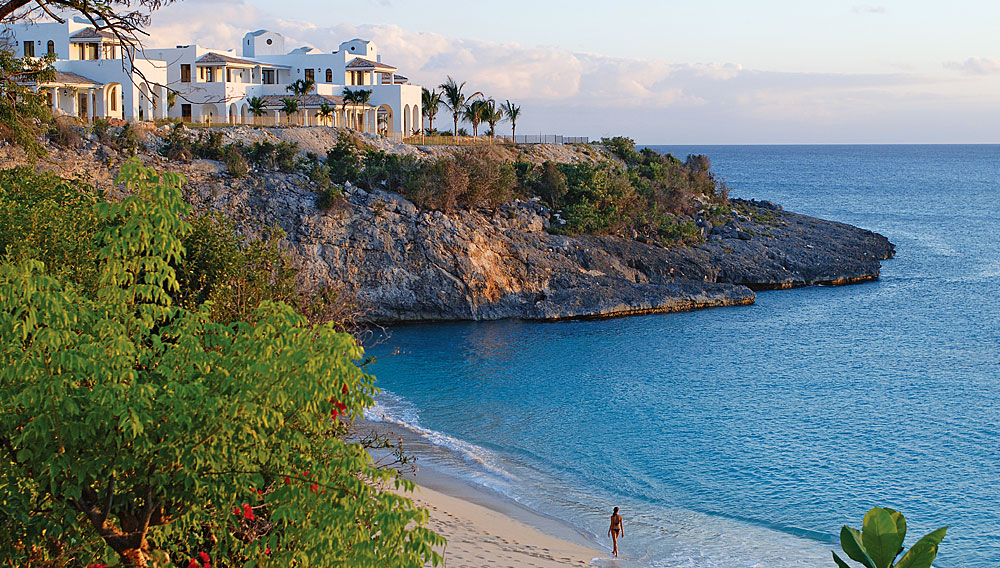 Brett Grossman, a fifth-generation Coca-Cola bottler from Boerne, Texas, had an unexpected encounter with nature while vacationing with his family last summer at the Ritz-Carlton’s Abaco Club on Winding Bay. He and his 10-year-old son were scuba diving in the turquoise waters off the Bahamas’ Great Abaco Island when a shark suddenly entered their path. “It was the highlight of the trip,” recalls Grossman, whose son aspires to be a marine biologist. “I wasn’t worried that we would be its next meal.”

Grossman’s steely calm in the presence of risk and danger revealed itself again when his family returned home from their vacation. In July—a time when the destination-club industry was reeling from the real estate crash and bank collapses of 2008—Grossman became the first person to join the new Ritz-Carlton Destination Club. “My confidence in the brand led me to make the decision,” he says.

Originated in the late 1990s, the destination-club concept held the promise of hassle-free vacations at multimillion-dollar residences in stunning locations—all for the cost of an up-front membership deposit and yearly dues. At its height, the industry included more than 40 different clubs. Today only about a dozen are in operation.

“[It’s] a wonderful concept that really should be larger than it is now,” says William Scherer, owner of DestinationClubForums.com, a social web site where some 2,200 current and prospective club members share reviews and offer insider advice about choosing a club. “But the early pioneers made some crucial mistakes that caused a cloud over the entire industry.”

Many of the clubs that survived the fallout have charged members hefty assessments and hiked up annual dues to stay afloat. But the leading clubs and a small crop of new clubs—some affiliated with established brands such as Ritz-Carlton—have adapted to the realities of the real estate market and now offer more financial transparency and, perhaps, less risk. “I think the bad times are behind us,” says Scherer. “And joining a club will still change the way you vacation with your family.”

Or, as in Grossman’s case, it might help preserve a family tradition. “My grandfather was a big fan of Ritz-Carlton,” he says. “It’s how I learned what a nice experience at a hotel was like. He would have loved that I continued the tradition with my own kids.”

No matter your motivation for joining, says Scherer, you should closely review the balance sheets of any destination club on your radar. Following are seven clubs worth considering.

Members of this new club from the Ritz-Carlton Hotel Co. purchase points that can be exchanged for stays at seven destinations within the chain’s 10-year-old fractional-ownership club and at 72 hotels worldwide. “For many people, their travel patterns are so unique and varied that staying at a hotel in Istanbul is just as attractive as staying in a three-bedroom condo on Lake Tahoe,” says Bob Phillips, senior vice president and chief customer officer for the club. Membership—which is in the form of a deeded interest in the club’s real estate holdings—is priced from $130,000 plus $7,300 in annual dues for 5,000 points (25 percent of which can be applied to hotel stays). Point-exchange rates are determined by the destination, season, and size of the residence. For example, a President’s Week stay in a two-bedroom residence at the new Ritz-Carlton Club, Lake Tahoe, in California, would cost approximately 5,700 points, while that same week in a hotel room at the Ritz-Carlton, South Beach, in Florida, would be 2,500 points. In addition to the Lake Tahoe property, the Ritz-Carlton’s club locations include San Francisco, Great Abaco Island, Kauai, and Aspen. 800.278.0121, www.ritzcarltonclub.com

This club charged its members nearly $16 million in assessments last year, which “nobody liked,” concedes president and CEO Jim Tousignant. “But it was a critically important part of our stabilization plan.” In October, Ultimate Escapes took another important step when it became the first publicly traded destination club, a move that helped raise funds and provide more financial transparency. “It’s the single greatest piece of news to come out of the destination-club industry in 2009,” says DestinationClubForums.com’s Scherer. This year, Ultimate Escapes will roll out smart-home technology at its residences: Upon arrival, members will run a card through a reader, and the home will come alive with their preferred music and lighting, and family photos will appear on digital frames. “The goal,” says Tousignant, “is that the moment you walk in the house, it feels like a home.” Membership plans vary depending on home size and value, but range from a $70,000 deposit plus annual dues of $8,000 for 14 nights per year to $450,000 plus $49,000 for 60 nights. Members at the highest levels have access to 130 residences in 45 destinations, including Manhattan, Belize, Paris, and Telluride, Colo., as well as privileges at more than 140 boutique hotels worldwide. 877.955.1900, www.ultimateescapes.com

Travel operator Abercrombie & Kent debuted this equity-based destination club at an inauspicious time. “The press release to announce the launch went out September 15, 2008,” says Darin Gilson, senior vice president of sales and business development, “the very day that Lehman Brothers went bankrupt.” Poor timing might be the club’s only false step. “I don’t think I’ve ever read one negative post from an A&K Residence Club member,” says Scherer. This marks a change from A&K’s initial entry into the destination-club industry, when the company licensed its name to Preferred Retreats, a club that filed for Chapter 11 bankruptcy in 2006, shortly after A&K dissolved the partnership. A&K’s new venture—born of the company’s acquisition of the Crescendo and BelleHavens destination clubs—comprises 18 homes in 14 destinations, including a four-suite villa situated along the 15th hole of the P.B. Dye–designed golf course at Punta Cana in the Dominican Republic. Prices range from $225,000 plus $17,000 in annual dues for 15 nights to $495,000 and $42,000 in dues for 45 nights. (A&K is offering discounted fees through the end of March that begin at $135,000.) Members can also exchange nights for credit ($1,200 per night) toward travel with A&K. 866.342.8367, www.akresidenceclub.com

This club prides itself not just on its portfolio of homes—which the company says have an average value of $4 million—but on the availability of those homes. “We sell 225 planned nights per home, while most of our competitors are selling over 300 nights,” says cofounder Ben Addoms. This means Quintess’ roughly 550 members have good odds of landing reservations at the club’s six-bedroom estate in Napa Valley that overlooks a private vineyard, or its oceanfront villa on St. Martin that debuts in February. “We can do it because we charge more,” Addoms explains. Indeed, while initial membership deposits begin at $98,000 plus $7,525 in annual dues for seven nights, they can go as high as $895,000 plus $64,500 in dues for 60 nights. And in 2008, the club increased dues for existing members by an average of 40 percent. “It’s one of those things where you take a gulp or two,” says Greg Stanislawski, a member since 2004. “But they were doing all the right things and cutting back on their own salaries and expenses. I have trust in the management.” And he trusts that the vacation experiences will continue to appeal to his 25-year-old son and 23-year-old daughter. “It is the biggest compliment you can get as a parent when your children still want to spend their only vacation time with you,” says Stanislawski. “We’ve got a great hook.” 800.550.?0324, www.quintess.com

The result of a licensing agreement between Quintess and the PGA Tour, this club was scheduled at press time to launch in January. Members and as many as 10 guests will have privileges at 36 Tournament Players Club courses around the country, access to about 15 golf-destination residences, and VIP entry to all PGA tournaments. “This level of access has only been available to the people whose name is on the front door of the tournament,” says Quintess’ Addoms. Membership will also include benefits at the PGA Tour Academy golf schools. “You can take your board of directors or top clients on a long weekend and have an amazing golf experience,” says Addoms. “Or you can take your family to the academy headquarters in Florida and learn golf the way the pros do.” Corporate memberships begin at $205,000 in initiation fees and $42,000 in annual dues for 14 nights, and go as high as $660,000 plus $138,000 in dues for 56 nights. Quintess members can trade nights in their existing programs for golf privileges, or pay an additional $25,000 plus $10,500 in annual dues to add the PGA Tour Club to their membership. 877.577.6420, www.pgatourclub.com

Adam Capes and Philip Mekelburg, who founded Equity Estates in November 2006, have met personally with nearly every one of their club’s 86 members. “It is critical for them to get to know us and get an understanding of the business model before they make a decision like this,” Capes says. It is also a legal precaution, because while Equity Estates mirrors the services and amenities of a destination club, the company is actually an investment fund. Owner-members make capital contribution investments for either full (30 nights) or executive (15 nights) interests in 12 residences (with an average value of $3 million) in 11 destinations. “Their Turks and Caicos home is stunning,” says Scherer, “their Telluride home is stunning, and they’re the only club with a three-bedroom property in New York City.” The Equity Estates fund will cap out at 300 members. By 2021, the homes will be sold, and the proceeds will be distributed back to members. Equity Estates only discusses its fee scale with accredited investors, but sources estimate pricing to be $375,000 for a full membership interest and about half that for an executive interest. 800.413.3340, www.equityestatesfund.com

The titan of destination clubs, Exclusive Resorts found itself at a crossroads last August, when it announced plans to reset annual dues in 2010. Early members who had enjoyed low introductory rates since the club’s inception in 2002 faced increases of up to 200 percent. Still, according to Scherer, satisfaction among the club’s approximately 3,400 members remains high. “Exclusive Resorts members are very discerning, and they understand that the company provides a wonderful product that is well executed,” he says. “It is rare for me to speak to an unhappy member.” Plans begin at $160,000 plus $9,995 in annual dues for 10 nights in the club’s residences, and go up to $500,000 plus $59,700 in dues for 60 nights. Exclusive Resorts has about 400 residences in 36 destinations, ranging from Whistler, British Columbia, to Wakaya Island in Fiji. The club’s Once in a Lifetime vacation packages have included private cruises to the Galápagos Islands and Antarctica, and Western-themed stays at the C Lazy U Guest Ranch in Colorado. 866.863.2688, www.exclusiveresorts.com