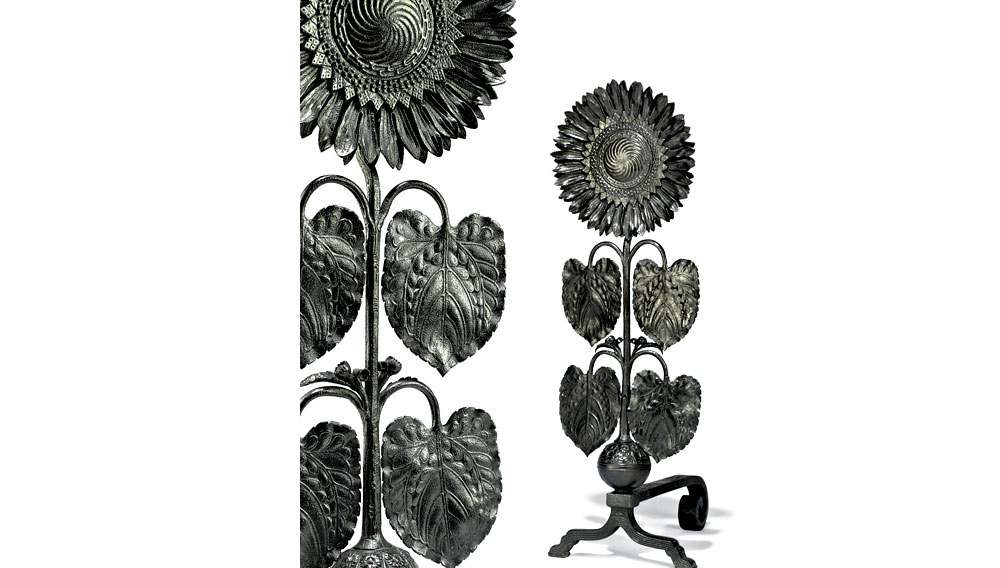 Interior designer David Phoenix calls fireplace accessories the jewelry of the fireplace. Evidently he is not alone in esteeming grates, pokers, tongs, and andirons—the racks that lift firewood off the floor to help oxygen circulate and feed the flames. Choice examples of these items, andirons in particular, can command five- and six-figure prices at auction. “When you see andirons sell for $40,000 or more, you’re taking out someone who’s looking for nice ornamental andirons for their living room,” says Jodi Pollack, senior vice president and head of the 20th-century design department at Sotheby’s. “When you’re trading at that level, they become icons of design.”

Andirons’ front pieces, which face the room, often are elaborately decorated, but the design of the pair that might hold the auction record (if such records were kept) is sleek and minimalist. The set, created around 1905 in the workshop of the American Arts and Crafts designer Gustav Stickley, fetched $278,500 at a Sotheby’s New York sale three years ago, rocketing past its presale estimate of $40,000 to $60,000.

Fireplace accessories made by Stickley and other well-known brands such as Greene & Greene, Chippendale, and Tiffany & Co. tend to draw the highest prices at auction. Pollack also attributes the price paid for the Stickley andirons to “the rarity factor.” The lot was one of only two known sets bearing a copper-plated finish. In its catalog, Stickley’s company offered only an iron version, so it is likely that the copper-plated versions were private commissions. “On a scale of 1 to 10,” says Pollack, “they were a 12.”

In 2006 and 2007, Christie’s London offered two different sets of sunflower andirons designed by 19th-century British architect and designer Thomas Jeckyll. A sibling pair grace the Peacock Room, the sumptuous London dining room that Jeckyll and artist James McNeill Whistler created in 1876. (Around 1920, the room and all of its contents were transported to Washington, D.C., and installed in the Freer Gallery, part of the Smithsonian Institution.) The sets that Christie’s auctioned garnered £90,000 apiece from different buyers (that price was equal to $169,000 and $178,000 at the times of the sales). Both buyers admired Jeckyll and were more interested in acquiring examples of his work than in finding finishing touches for their hearths. “In both cases, they were specifically looking for these items,” says Joy McCall, head of 20th-century decorative art and design at Christie’s. “They certainly had a specific interest in this period.”

It is unlikely, says Pollack, that the accessories commanding six-figure sums serve working fireplaces. “In most cases, I think they are being revered as masterworks,” Pollack says. “They’re not necessarily being used on a daily basis, but they add to significant collections.”

While collectors might account for the priciest acquisitions, other buyers purchase antique designer fireplace accessories intending to put them to work—but they pay more modest sums for them. In recent years, the Rago Arts and Auction Center in Lambertville, N.J., has sold a four-piece tool set by the contemporary metal artist Albert Paley for $12,000 and a wrought-iron-and-brass poker by early-20th-century American master blacksmith Samuel Yellin for $2,600. “I’d say that 80 to 90 percent of our buyers are looking for something functional,” says Rago founder David Rago. “For the most part, especially when compared to what’s currently available in good fireplace-supply stores, period pieces are of better quality and a fraction of the price.”

Rare is the antique fireplace accessory that has remained unblemished. Even the prettiest at some point in time performed a tough, dirty job, and so they arrive on the market displaying scars. “Frankly, a little wear goes a long way in establishing originality,” says Rago. “I’m always suspicious of a 100-year-old set that looks brand new. These usually have been touched up at some point.”