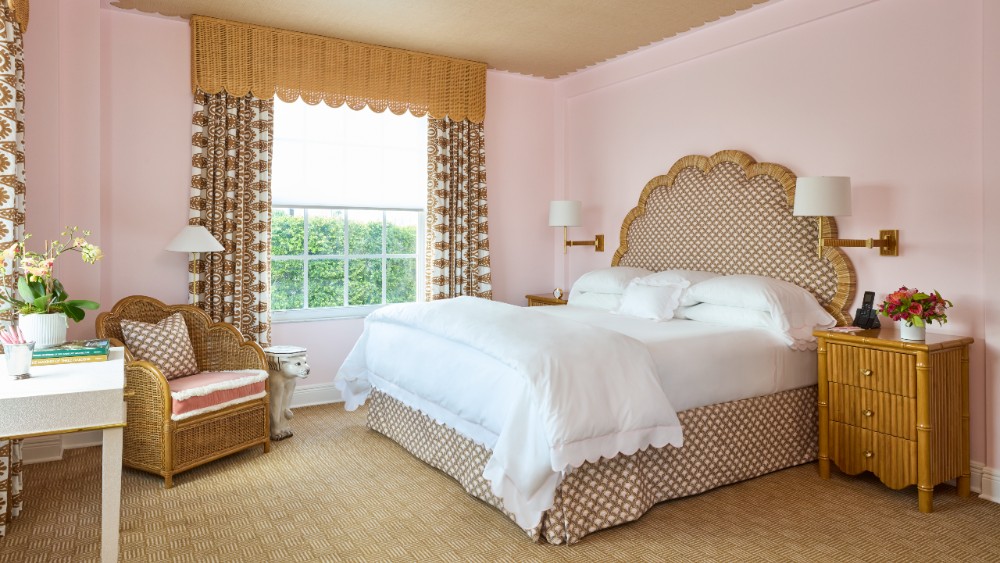 In celebration of its diamond anniversary, a treasured hotel in Florida recently unveiled a redesign of its accommodations.

For more than 75 years, the Colony Hotel in Palm Beach, Fla., affectionately known as the Pink Paradise, has been a staple on the Florida hospitality scene since 1947. The pinkest hotel in the area, according to its tagline, the property is lauded as one of the most historic and chicest spots in the coastal town, having hosted dignitaries, political figures, tycoons and celebrities. To revive the property, current owners Sarah Wetenhall and her husband tapped Kemble Interiors and globally renowned design partners.

“We’ve been working with Kemble since we bought the property in 2016,” says Wetenhall. “One of the first decisions we made was finding a design partner who shared our vision of what we wanted for this property. They helped design Swifty’s, the ballroom, a refresh of the pool area, the lobby, and now, the guest room redesign.”

Although the property’s guest rooms received a redesign eight years ago from renowned Palm Beach designer Carleton Varney under previous ownership, Wetenhall wanted to make the accommodations more cohesive. In the previous styling, no two rooms were alike, which she says is an operational challenge. To keep the whimsy and surprise element alive, Kemble created four design schemes.

“We wanted to embrace that whimsy, and so when you stay multiple times at the Colony, the hope is you won’t end up in the same guest room twice,” she says, adding that they redid the hallways as well to be more cohesive to the guest rooms’ patterns and color schemes.

Anyone who has been to Palm Beach knows its distinct style: bright hues, nature-inspired motifs and plenty of textures. For the redesign, Kemble’s founder Mimi McMakin incorporated these Palm Beach–chic elements through de Gournay wallpaper that depicts a different colorful scene on every landing. Each hallway on various levels feature local scenes including the Lake Trail, Bradley Park, Royal Palm Way and a beachy ocean scene. As a guest, she noticed the hallways were always dark, the opposite of Palm Beach’s cheery tropical vibe. That memory encouraged her to add sea grape–shaped wall sconces throughout the hallway.

Wetenhall also collaborated with Society Social on an 11-piece furniture collection two years in the making. The set, which will be available for purchase in January, features artisan-crafted rattan and faux bamboo pieces as well as upholstery items, all inspired by the tropical glamor of Palm Beach. She also enlisted heritage British paint company Farrow & Ball to create new custom-formulated colors, including the coined hue “Colony Pink” on the famed blush-toned exterior, as well as other unique tints from the brand’s palette: “Middleton Pink,” “Parma Gray” and “All White.”

“The exterior in ‘Colony Pink’ is an exclusive color, and we worked on getting the exact right shade that will hopefully not fade with sun and salt and will look as beautiful and vibrant in person as she will on film,” Wetenhall says.

Another key element in the redesign was the in-room guest experience. Wetenhall says that because the hotel was built in 1947, the layout is different from newer hotels today. For example, the bathrooms are smaller than today’s might be, and there’s plenty of closet space.

“The rooms are lovely, but they’re from another era, so we wanted to maximize the amenities we offer in a way that doesn’t clutter up the rooms and bathroom,” she says. “Guests will find Dyson hair dryers and a straightener, beach totes with a beach towel with our logo and a bottle of water with a note. We aim for intuitive hospitality and want to provide a ‘welcome home’ experience.”