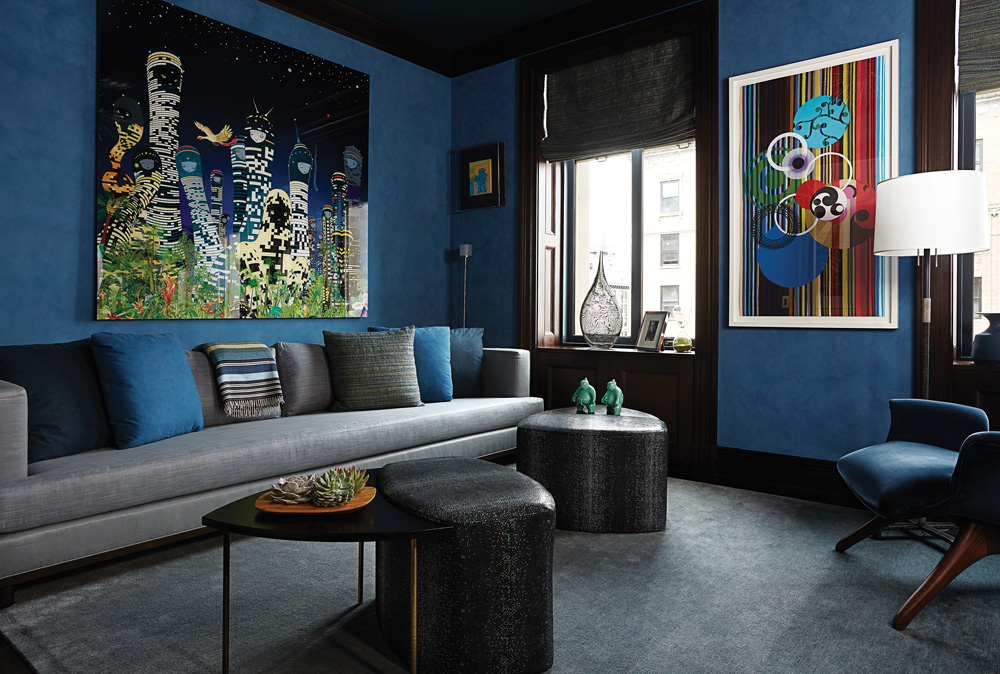 It is no coincidence that the foyer of a chic apartment in New York’s majestic Apthorp building feels like an art gallery. Entries usually give clues to their owners, so arriving in a space where Marilyn Minter’s Cyclone photograph of a close-up glittery face holds court with a subdued landscape of a river delta by photographer Edward Burtynsky, and where a dazzling LED work by Jim Campbell looks like a modern relief on the wall, one gets the distinct impression that very cool art collectors live here.

And they do. But this is a home designed for living with art. Case in point: the shapely royal-purple ottoman designed by interior designer Darrin Varden for the space, a piece meant for mingling guests and viewing art. It’s a sexy, confident choice that’s surprising in a soigné historic environment. It doesn’t compete with the art and foreshadows the design to come in the rooms visible from the entry. “I need harmony,” says Varden. “How do chairs relate to sofas, to the architecture, to the fabric in an adjacent room? What’s the flow, the intention behind it?”

The clients, a couple whose days are spent rather differently—she is an artist and art consultant; he works in finance—are passionate about collecting. When they purchased a pair of condos in the Apthorp, a 1908 Italian Renaissance Revival landmark built by William Waldorf Astor that has attracted celebs like Cyndi Lauper, Jennifer Hudson, Al Pacino, and Conan O’Brien, they could finally fashion a home where art and family (two toddlers and a shih-poo) would live easily.

Varden is an alum of the prestigious firm run by designer Jamie Drake and has worked for Benjamin Noriega-Ortiz, his mentor. He was long in awe of the Upper West Side building with its courtyard, Palladian archways, carvings, and mosaic floors (Astor spared no expense with the lavish details) and was thrilled to take on the project. Architects Fernando Papale and Ingrid Birkhofer of BP Architects were enlisted to merge the sprawling apartments into a seamless 5,700-square-foot space. With 57 Apthorp units under their belt, the duo was already intimate with all the restoration challenges. Papale described the upgrades as “surgical design”—a careful excision or salvation of various features.

Preserving the best architectural details was essential, starting with the magnificent stone mosaic in the foyer and the stone baseboard. The rift and quartersawn herringbone flooring was replaced, and Papale and Birkhofer made a few improvements to the wood flooring by adding details along thresholds of “pocketed double in-swing” doors they commonly call “Apthorp doors.” Oak paneling in the dining room was stripped, bleached, and meticulously stained 16 times, says Papale, to achieve a gray base finish. They also replaced parts of the wainscoting to match the original work.

Varden likes to treat ceilings to color, high sheen, and even silver. “It’s sexy,” he says. And in some places, the clients welcomed “more kick,” says Papale, referencing a small medallion in the foyer that was enhanced with ornamental appliqués to give a lacework effect.

Because so much cherished art was on hand, nothing was left to chance. “We built plywood mock-ups to test the weight and tested the lighting to make sure it hit the artwork the right way,” says Papale. The walls were painted in Benjamin Moore’s American White because the client believes that’s the best way to showcase art. “I’m a cool-color person. I love the sky and the sea, the beach,” she says. Varden honored this palette of blue tones. The designer, who appreciates tonality, often embraces variations of a color on a paint strip. “It brings a modern Zen quality, a fluidity throughout,” he says. He drew on shades of blue and purple, modulating them elegantly to shift the mood throughout—like the periwinkle shelves with silver-leaf cerused cabinetry by artisan Christophe Pourny for the office, and a rich blue satin for the custom Marks & Tavano Workshop wall in the master.

In the living room, with its classic arched windows, Varden introduced contemporary design icons Wendell Castle and Vladimir Kagan while channeling William Haines in a custom silk mohair velvet sofa. “They’re a modern couple, so I wanted it to be more of a modern lounge that heralds classicism.”

Transitioning from the white-walled living spaces, the family room strikes a different tone, infused with color like the deep navy ceiling and suede-like painted walls in a vibrant Bermuda blue. One wall hosts an original signed Andy Warhol painting called Battery Operated Robot. “I take emotional and spiritual awareness into account while designing,” says Varden. “For this room, since it’s all these dark, luscious hues of blue, I was able to create a very cozy ‘wrapped’ feeling. So while you’re watching television or movies, you feel enveloped and nurtured. Just through the tool of color you can alter the energy of the space.”

BP Architects energized classic paneled cabinetry in the kitchen, while Varden created a large-scale rectangular mosaic floor and selected statuary with dramatic veining. He tempered the bright white with glossy black Verner Panton chairs and a tufted ruby banquette. While his play with contrast was strong throughout, it looks especially alluring in the master bedroom, where lavender tones, sheen, and tailored nightstands continue the thread of present-tense glamour and share space with Robert Longo’s mesmerizing black-and-white charcoal of a veiled woman. The room is the perfect distillation of this art and life entanglement, where one is empty without the other and both can be escapist thrills.