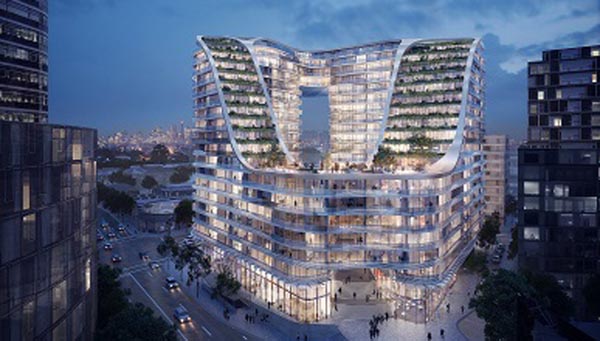 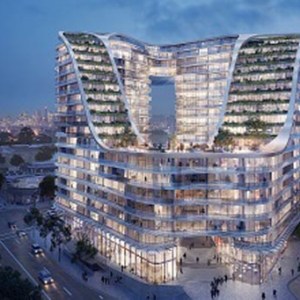 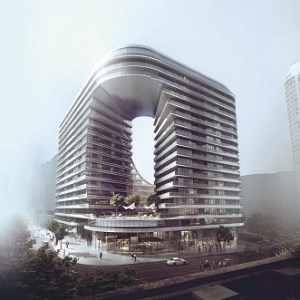 (Sydney, Australia) June 16, 2015 – An Australian developer has shed light on the future of apartments with a forward-thinking residential design.

Designed by Koichi Takada Architects, the luxury 401-apartment development has been devised with future residents in mind; and features a number of groundbreaking design elements.

Perhaps its most striking feature, the building’s unique looped shape along with a void in its north-facing façade allow natural light to penetrate a central landscaped plaza and apartment balconies, which may otherwise be shaded.

A tiered apartment structure on the development’s south side – complete with cascading external gardens – will provide year-round daylight to south-facing apartments; while a northern-side lounge and function room, The Sky Lounge, will capture northern views and light from the north.

“This groundbreaking development has attracted the attention of the world’s architectural community and is fast becoming known across the globe,” Mr Sunito added.

Located at 301-303 Botany Road, Crown Green Square is an integral part of the new Green Square Town Centre redevelopment, a major new residential, retail and cultural hub to be built over the next four years.

In addition to its 401 luxury apartments, the mixed-use development will include 30 retail and commercial spaces, a ground-floor conference center, an infinity-edge pool, spa, gym, music rooms, theater and concierge.

Crown Green Square is expected to complete construction by late 2019.

A landmark site within the new Green Square Town Centre, Crown Green Square was a chance to start with a blank canvas and strive to create something new and exciting, architect Koichi Takada said.

“Unlike other new developments which are surrounded by a well-established town centre, Crown Green Square is an opportunity to showcase the future of Sydney. Our design for Crown Green Square is fluid and futuristic; inside and out. The final design included significant consideration of public benefit and the future needs of the area with the inclusion of a central public plaza and a smooth transition from the private space to the public domain,” he said.

The Japanese-born architect is renowned for his cutting edge designs. “Crown Green Square is about future living,” Mr Takada added.

Crown Group Holdings (Crown Group) is a leading Australian property group specialising in property development, property investment and serviced apartments. Founded in 1994, Crown Group has offices in Australia, Indonesia and Singapore and is currently developing in Australia and Indonesia. The company was co-founded by architect Mr Iwan Sunito and engineer Mr Paul Sathio in 1994.

Iwan Sunito graduated with Bachelor of Architecture (Hons) and Master of Construction of Management from University of NSW. In 1993 Iwan became a Registered Architect in NSW and was awarded the UNSW Eric Daniels award for excellence in residential design. In recent years Iwan received a number of awards including Indonesia’s Property & Bank Magazine Golden Leadership Award 2013, the 2013 Congress of Indonesian Diaspora Entrepreneur award and named a winner in the 2013 Ernst & Young Entrepreneur of the Year Awards.

Past and recent projects

Since the company was founded 21 years ago, Crown Group has successfully completed major developments in Sydney’s best locations including Bondi, Bondi Junction, Parramatta, Ashfield, Epping, Homebush, Newington, Pennant Hills and Rhodes and most recently Viking by Crown, a 10-story residential complex in Waterloo.

Today, Crown Group boasts a large portfolio of projects under development and in the pipeline and is currently developing four major projects; V by Crown, a 29-storey residential tower in Parramatta, Skye by Crown a 20-storey development in North Sydney, Crown Ashfield, in Sydney’s thriving inner-west and Sydney by Crown in the heart of Sydney’s CBD.

After selling out Top Ryde City Living in October last year, Crown Group launched Sydney by Crown in November, resulting in more than $170 million in apartments sold within four hours.

Crown Group will launch a number of projects this year including the award-winning architectural landmark development Crown Green Square.