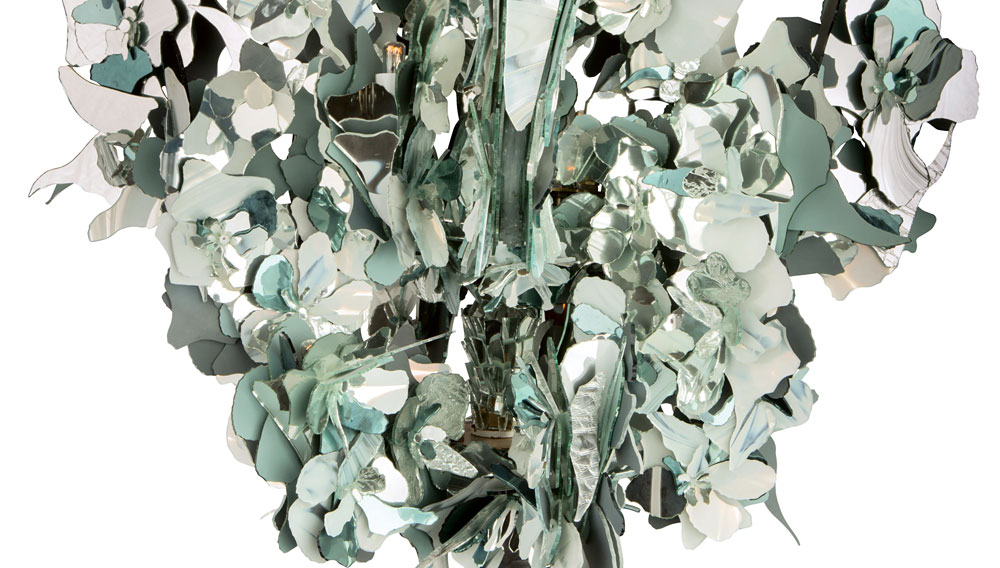 Lighting that is truly a glass act

A Nathalie Pasqua–designed chandelier is more sculptural than functional, casting no more light than that emitted by a handful of birthday candles. And this is precisely the intention of the former ballerina turned lighting creator. After 20 years under the Opéra National de Paris’s glaring stage lights, Pasqua found even candlelight to be too harsh. Thus the Paris native began designing her own lighting fixtures to have the dimmest possible glow.

The Spa at Mandarin Oriental

The finishing touch of the hotel’s makeover is the 8,000-square-foot spa, which reopened in October. From its 40th-floor perch, the facility affords views that are as spectacular as its art collection and Asian-inspired treatments ($65 to $630). 415.276.9608, www.mandarinoriental.com

Known for his work with such international brands as Bisazza, Swarovski, and Fabergé, Jaime Hayon has lent his creative talents to Lladró for its new 1,500-square-foot boutique at 500 Madison Ave. The 38-year-old designer’s choices for the space, which houses the Valencia, Spain–based company’s porcelain offerings ($60 to $190,000), include glass, marble, curved surfaces, and numerous shades of white. 212.838.9356, www.lladro.com

The interior designer Alice Siess recently launched Chateau360, a website purveying her curated selection of more than 2,500 items for the home. The offerings, which include the Reed table ($3,128), are the works of some 75 artisans based in the United States, France, Italy, and Germany. 877.248.1170, www.chateau360.com

In the Drinking Set No. 248, Sagmeister on Loos collection, depictions on the glasses’ bases of a clock, a chastity belt, a measuring pitcher, bees, hands, a mouse, and a heart represent the seven heavenly virtues, while a gun, breasts, a table setting, a bed, gold bars, a lion, and an eye symbolize the seven deadly sins. Introduced last year, the handpainted double old-fashioned tumblers (set of seven, $2,415) mark the 80th anniversary of Loos’s original glasses, which featured butterflies, animals, and the human form. Available at TableArt, 323.653.8278, www.tableartonline.com

Using materials such as bronze, exotic woods, and mirrored and stainless steel, the designer has created a 32-piece, limited-edition furniture collection ($7,350 to $127,000). Each of the tables, consoles, benches, and mirrors (Miroir Fracture shown) embodies the sense of balance that has defined Van der Straeten’s work since his early days as a jewelry maker. Available through Ralph Pucci, 212.633.0452, www.ralphpucci.net

This lacquered wood bar (newly available in tangerine as shown, $17,135) opens to reveal three drawers, a wine rack, glass storage, and built-in shelving for additional bottles. Options include 15 colors and a range of veneers. 336.885.8818, www.dorya.us

With Hollywood Hills views, a private entry to the building’s rooftop pool, and a midcentury-influenced design by Waldo Fernandez, this 4,000-square-foot furnished penthouse commands $35,000 per month, making it the priciest apartment rental in the City of Angels. 310.274.9898, www.8500burton.com

The airline’s Upper Class travelers have New York–based Slade Architecture to thank for the downtown-meets-jet-set vibe of Newark Liberty International Airport’s new clubhouse, which opened in November. The space’s bar, locavore brasserie, screening room, and nap-friendly sleep pods set the tone for a relaxing flight in the new Upper Class cabins on Virgin’s A330-300 aircraft (Newark to London from $1,476). Clubhouse privileges, including chauffeured transport to the airport, start at $240. 800.862.8621, www.virgin-atlantic.com

The L.A.-based Wiseman is just 32, yet his works of porcelain, plaster, glass, and bronze evoke the timeless creations of the Lalannes, William Morris, and the Wiener Werkstätte. The Lattice Ribbon table (shown) starts at $45,000. Available through R 20th Century, 212.343.7979, www.r20thcentury.com

For the guests of its apartments (about $1,700 nightly), Hotel Arts will arrange a private design consultation with professionals at Jaime Tresserra’s appointment-only Barcelona showroom. Tresserra’s handcrafted furnishings (Casablanca armchair and footrest shown) appear in the hotel and in museums worldwide. +34.93.2211000, www.hotelartsbarcelona.com

On April 18, the hotel’s Edward Sahakian Cigar Shop and Sampling Lounge, designed by Milan-based Antonio Citterio Patricia Viel and Partners, will host its first cigar and Cognac tasting (from $800 per person). Participants will enjoy Louis XIII Cognac and sample rare smokes, such as the Cohiba Sublimes Limited Edition 2004, in elegant surroundings decorated with sleek woods and rich leathers. +44.207.151.1025, ilristorante-london@bulgarihotels.com

The family-owned winery may be 625 years old, but its new cellar is fully contemporary. The 67,000-square-foot space, carved into a hillside, is the Florentine architect Marco Casamonti’s design. It includes a museum and a library, which are open this spring (tours from $27). +39.055.2359857, www.antinori​chianticlassico.it  [Section by Jorge S. Arango & Samantha Brooks]