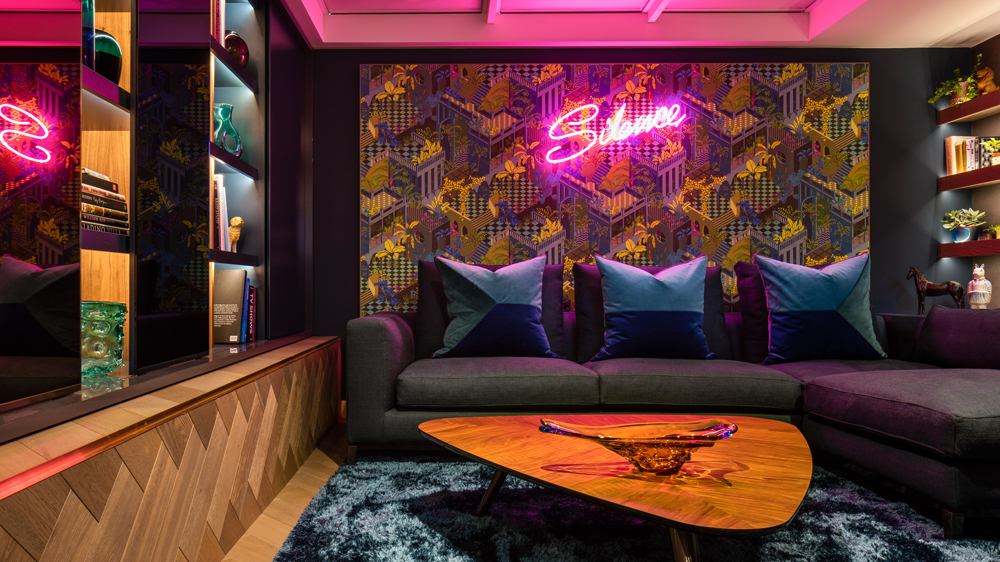 The door opens. A gust of relief sweeps through the air, and the inviting sensation of being home wraps itself around you. It is this profound feeling of customized comfort that British designer Daniel Hopwood finds to be so vital when designing a space. Renowned for his work predominantly in residential properties, the former president of the British Institute of Interior Design—and judge on BBC’s The Great Interior Design Challenge—has a way of taking a drab, rather forgettable interior space and transforming it into a bespoke masterpiece.

As a part of his process, Hopwood sits down with his clients over tea and takes a moment to truly understand their wants and desires—from how they spend their weekends to their frenzied Monday-morning routines. As he sees it, design should follow this bespoke nature—if one takes the time to tailor a pair of trousers, why not also take the time to tailor your home? It is with this ethos that Hopwood carried his vision to the posh London neighborhood of Hyde Park, where he would create a personalized interior known as the Sound of Silence.

The two-story residence in London’s West End received a major face-lift when he came in and liberated the house from its ostentatious chains (think gold swan taps and an abundance of tech). In collaboration with artisan and woodworker James Ransley of Whetstone Oak, Hopwood created a showstopping floor-to-ceiling wall installation composed of raw wood and agate, which immediately brightened up the space and added a cohesive element to both floors. The wall also lends itself to the color palette of the home by blending dark, sensual browns with yellows, oranges, and dashes of gold. “I wanted something that would link the two floors visually, that would be sculptural and add warm light into the heart of the house,” says Hopwood.

Interior by designer Daniel Hopwood for his project The Sound of Silence in Hyde Park, London.  Photo: Andrew Beasley

Sitting at the base of this mega wall installation is a rustic wooden table that, at first glance, appears to have been sliced from the trunk of an ancient oak tree and cut in half. The piece brings a necessary abundance of character, depth, and texture to the modest-sized kitchen and dining area—coasters required. Added flair in the kitchen can be found via the corner nook, which is adorned with orange and blue throw pillows, while the slate-gray hexagon design is a refreshing choice for the flooring.

To bring more personality to the room, Hopwood expertly deployed pattern and color. Not for the faint of heart, the wallpapered accent walls in the guest bedroom are a maze of cerulean designs highlighted by shades of brown. On its own, the design would best be suited for a scarf, but when matched with the furnishings, the wallpaper is surprisingly less overwhelming—a testament to Hopwood’s eye for design. “It’s easy to be risky with wild wallpapers and colors, as they can be repainted in time,” says Hopwood. “Even the orange Minotti sofa cover can be changed as it is actually removable, and new covers can be purchased from the supplier. Nothing is a risk when it has been considered.”

In the master bedroom, subtle white and gold wallpaper plays off the regal drapes, gifting the room with glamour. No stone was left unturned in the Sound of Silence. From the enormous walk-in closet—fully customized for the client’s spectacular wardrobe—to the bathrooms festooned with sharp lines and contemporary fixtures, Hopwood ensured that the home reflected the needs, individuality, and style of the owner. He even went so far as to include a hydraulic dog bath for the client’s two rather large furry friends.

It’s a space that is as appropriate for entertaining as it is for lounging around on a long weekend. “The beauty of modern-day drafting means that I can create visuals so the client knows what they are getting. Still, though, nothing beats a human’s imagination,” says Hopwood. “As my client said when he first saw the completed project, “I knew everything that I was getting, but now I have seen it all together. That’s what blows my mind away.”