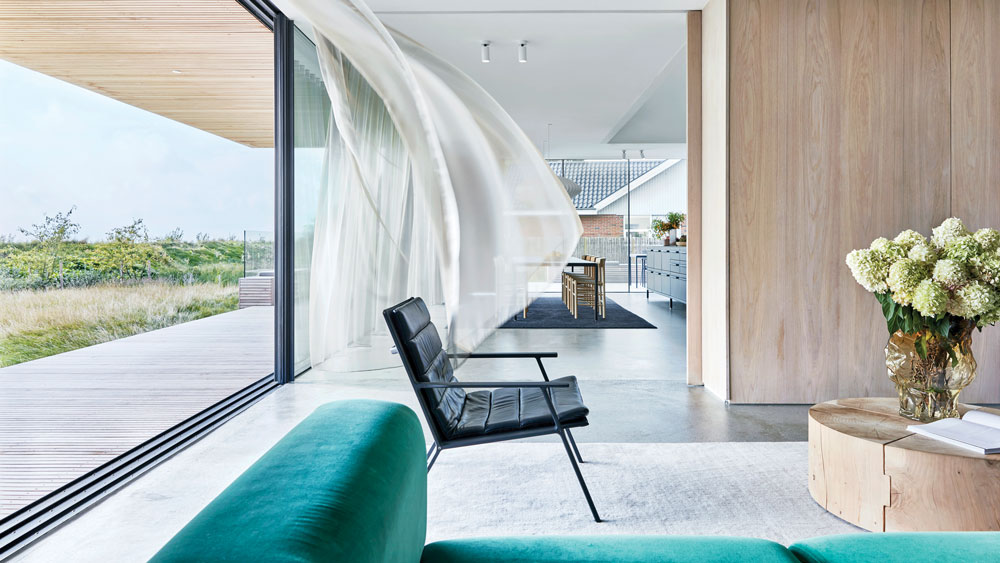 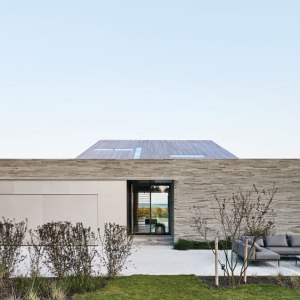 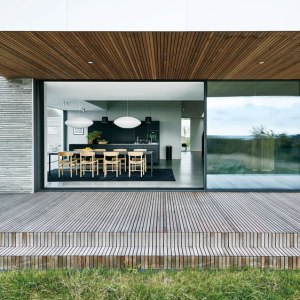 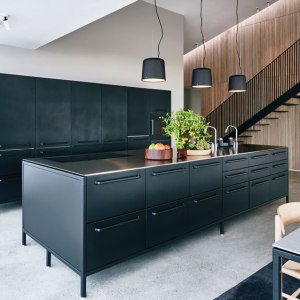 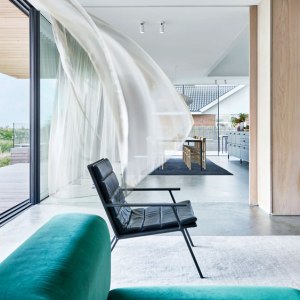 When the salty breeze blows in from the Baltic Sea, Kasper and Heidi Egelund’s house outside Copenhagen is there to catch it, just a few feet from the waterline on the other side of a small dike. The villa, made of brick and glass and cedar, is a full-time residence that seems like a beach getaway—quite a trick to pull off.

Even more surprising, the Egelunds live in this very composed space with their three young children, but there’s no chaos to be seen. When you know that Kasper is the CEO of the pace-setting, family-owned Danish design company Vipp, where Heidi also works running the HR department, it starts to make sense. The Danes are famous for their devotion to modern ideals, and modernity has at its core an element of practicality: Great modern design has to be beautiful and functional at the same time. You can’t have one without the other.

Completed two years ago after about a year of construction, the 2,800-squarefoot house is located in a quiet, friendly neighborhood called Søvang, part of the small seaside city of Dragør. It’s only a 20-minute drive to Vipp’s Copenhagen HQ for the Egelunds, who both make the short commute.

The house is composed of a series of simple geometric volumes aimed at maximizing water views. The first floor holds a big, open kitchen and dining space, a family room/library off to the side, and three small bedrooms for the children, plus a bathroom. Up a flight of floating black stairs, the second floor is just for adults, with a master bedroom fronted by a picture window looking out at the sea and a skylighted bathroom. A private balcony completes the feeling of staying at a very well-designed hotel.

“The whole idea was to create a beach house, very open, a place where you don’t have to take off your shoes,” says Kasper, in the midst of throwing together a small lunch of local vegetables, cheese, and bread with Heidi on a bright summer day. “It’s easy to live here.”

But, of course, such seeming ease can be complicated to create, and so the Egelunds, both 43, hired not one but two top architects to design the home—one for the exterior and one for the interior.

Architect Mads Lund chose a limited palette of all-natural materials for the primary architecture. As he puts it, “Every choice takes its point of departure in function.” The facade, facing the road, is largely clad in long, gray Kolumba bricks from the Danish company Pedersen—it presents a stable, solid face to the community. On the sea side, it’s clad in cedar planks, facing the elements with a hearty, traditional material that can weather over time. Large walls of windows face the sea to the back and a yard to the side, both opening onto cedar patios.

The restrained interior design was the province of the man Kasper calls a “rising star,” David Thulstrup, most famous for collaborating with Danish architect Bjarke Ingels on the recent revamp of the acclaimed restaurant Noma. Kasper hired the architect to create the Vipp loft, a special space above the company’s offices in Copenhagen that guests can book to experience the brand and design in an immersive way. “After seeing his work at the Vipp hotel, there was no doubt that David needed to do his magic in our private home. His style and visions are impeccable.”

Thulstrup chose raw concrete floors and, behind the staircase, a two-story, floor-to-ceiling wall of tidy wood strips. “The black metal staircase is inspired by the fundamental Vipp design language and stands in a contrast to the adjacent wood-cladded wall,” says Thulstrup.

Why hire two  architects when just one of them could have probably fielded both duties? “They are not specialized enough,” says Kasper. “It’s asking your brain surgeon to operate on your foot.” Seeking out both Lund and Thulstrup created the ideal design collaboration that was “all in all a smooth process where we got the best expertise from both worlds.”

The endorsement of specialization makes sense, since Vipp does a few things very well—in the States, it is best known for its brilliantly clean-lined kitchens, its prefab houses, and, amazingly, its trash cans. In fact, Vipp’s iconic, pedal-operated trash can—now in the collection of the Museum of Modern Art—is where the company started, when Kasper’s grandfather, Holger Nielsen, created it for his wife’s hairdressing salon. “My grandfather left us with an amazing heritage and values,” says Kasper, the third generation to run the company; he now owns a third of it, as does his New York–based sister, Sofie, and his mother, Jette. The company is committed to what he calls “functional, genuine, but still elegant” design.

Certainly, there’s no better showroom for Vipp’s aesthetic than the Egelunds’ own house. The matte-black powder-coated kitchen cabinets and drawer-filled island are classic Vipp in that they boast the chicly sturdy look the company has as its signature. Lunch is served on white plates, shaped like two merged circles, from the Vipp ceramics line. Naturally, trash cans come from the company, too, but one of the children’s bins has a bit of extra flair: It’s covered in colorful polka dots, the result of a limited-edition collaboration with the artist Damien Hirst. It’s a demonstration of how Vipp turned itself from a lesser-known niche company into a small but influential global design player.

The living room’s large green velvet sofa—the one moment of saturated color—is from modern Danish brand Hay (Vipp doesn’t make upholstered furniture), and the lights over the dining table are George Nelson’s classic Bubble lamps for Herman Miller. The Egelunds will source from anywhere, as long as the aesthetic is consistent with how they want to live: simply, elegantly.

“Architecture is so powerful,” says Kasper. “Good design can change everything.”