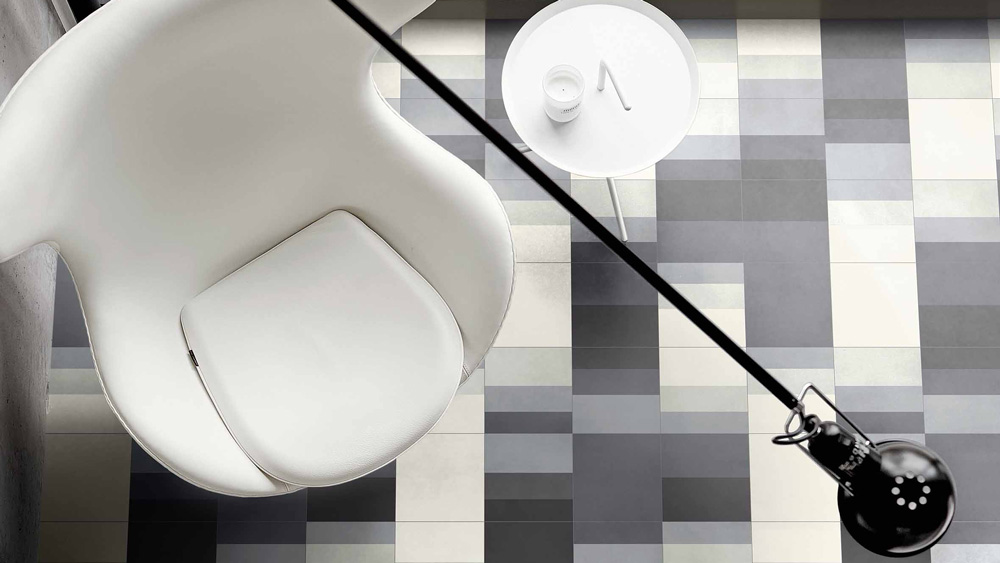 Revered architect and designer David Rockwell of the Rockwell Group is undeniably good at the big gestures. The creative force behind an impressive portfolio of restaurants and hotels worldwide—Nobu hotels and restaurants, the EDITION New York, the Langham in Chicago—he is known for some spectacular spaces. Rockwell has also done the set design for Broadway musicals like Kinky Boots and She Loves Me, which earned him a Tony. These larger-than-life projects make his latest collaboration with Italian luxury tile and mosaics brand Bisazza that much more intriguing.

Taking the drama and theatricality of his interior design projects, Rockwell has distilled those major moments into a slightly more modest canvas: a new group of 8-by-8-inch cement tiles for Bisazza’s Cementiles series. His Tonal collection is heavy on pattern with stripes, grids, and zigzags playing a major role. The palette includes four colorways, ranging from warm neutrals to cool, and intended for some freewheeling in-house experimentation be it on the floor or wall. The surfaces category continues to be a destination for some of the most inventive designs out there, and collection only reinforces that point. Rockwell’s patterns for his debut with Bisazza suggest movement in both slow, light turns and more kinetic, ombré effects.

“Light is a critical element in all the work I do as an architect and theatre set designer,” he has said. “So in my new collection for Bisazza, I explored the idea of how light transforms surfaces and environments.  We created a series of multi tone tiles that generate ombré patterns suggesting a sense of depth, undulation and vibrancy.”

The company unveiled Cementiles two years ago, inviting designers to give their contemporary take on the traditional cement tiles found in the palaces and mansions of nobility during the second half of the 1800s and early 1900s. Today, you can have a piece of the baronial Italian life and a David Rockwell moment regardless of square footage.