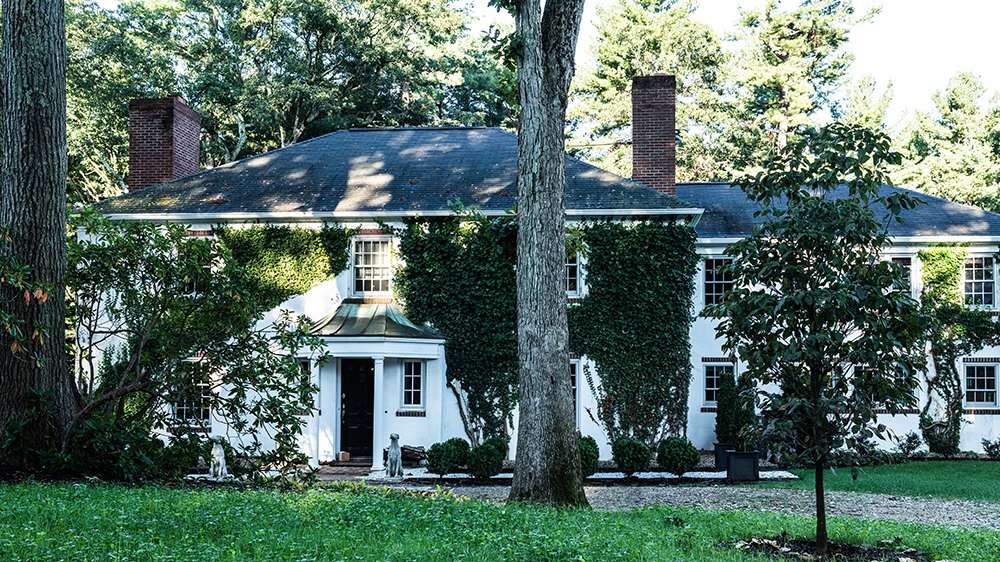 It was a few hours after the arrival of the container—40 feet long, straight from Hong Kong and dense with the McCullough family’s earthly possessions—that the sneezing fits returned. So instead of reveling in unpacking and arranging in the way only a decorator amid a trans-global relocation could, Lucie McCullough embarked down a rabbit hole to find some answers about why her body seemed at odds with her environment. Here in the States, months after not feeling well in Hong Kong, McCullough grew convinced it was her furniture that was making her sick.

After a decade in Asia, this peripatetic British former fashion designer and her husband, Ronan, a financier, had planned to settle their family into their home in the leafy Boston suburb of Concord. “I was convinced we’d move into a traditional New England clapboard or saltbox,” says McCullough. But no, they fell for a 1940s stucco that looks as if it had been plucked straight from Kent. It was “the most English house in the area,” as McCullough calls it, and seemed especially so during the viewing, when the two open fireplaces were roaring—catnip for a Brit, she claims. “Plus, there was a vintage Bordeaux Jag in the driveway… They really put it on for us!” But for the time being, the family hauled all that crated furniture out to the property’s stables. Mold tests came back positive: The family’s own picturesque moment would have to wait.

About 18 months later, while tending to their third baby (of now four) and prepping to renovate, McCullough and her husband met someone at a local restaurant who mentioned a natural home store in a nearby town. “I showed up at the shop the next morning, and the owner told me all about natural building practices,” she recalls. “I was on a plane to Santa Fe that next Monday!”

McCullough jetted to New Mexico to learn about Building Biology, a practice of nontoxic construction and homemaking that originated in Germany as Baubiologie. This set of standards and practices prioritizes both the environment and the health of a building’s occupants, and just maybe promised to be a balm for McCullough, who was born with a vascular condition and developed extreme allergies in Hong Kong.

While Building Biology was designed to be life-enhancing for all, the practice is thought to be especially powerful for environmentally sensitive people who suffer symptoms from triggers such as chemicals, mold and synthetic fragrances at far lower levels than the average person. McCullough counts herself among this population.

The last few years have brought increased scrutiny of indoor air quality and an onslaught of literature pinpointing the culprits: Volatile organic compounds (VOCs) from carpet, paint, engineered wood and cleaning agents are a few. According to the Environmental Protection Agency, some pollutants are found in concentrations two to five times higher inside than out. And since Americans spend about 90 percent of their time indoors—a statistic that predates the Covid-19 stay-at-home directives—the importance of nontoxic residential environments becomes even more obvious.

The Negroni Room, with a Chesterfield sofa from London.  MONICA SPEZIA

Renovation and demolition can exacerbate problems, releasing old toxins (from deteriorating drywall, insulation and such) into the air. It’s no wonder, then, that the Building Biology practices McCullough studied are gaining traction in the mainstream.

“If you talk to someone about green home building, they drift off,” McCullough acknowledges. “But when you talk to them about how they feel, their health or their kids’ health, then they’re listening.”

The mudroom cabinetry was designed by McCullough and painted by Ecos Paints.  MONICA SPEZIA

Back in New England and primed to launch a healthy renovation, McCullough found herself stranded in a curious aesthetic chasm, pitting her lifelong passion for global style against her new commitment to a design vernacular that implied, at best, a well-appointed organic canvas yurt. But could someone whose résumé includes a gap year in Mexico followed by stints in Rome (working for Valentino in college), Milan (Ralph Lauren) and London (British Vogue), as well as forays in design in Italy (women’s shoes and a luxury hotel) and a Hong Kong decorating business, ever concede to a less than fabulous home?

Turns out she didn’t have to. The decorator’s decade in Asia is evident in the swankiest rooms, where the influence of the louche China Club reigns. And McCullough’s unshakable homey English decorating is ever-present, softening the drama. It’s a family home, after all.

Many of the pieces have such intriguing provenances or attributes that you wouldn’t notice their eco or health benefits. McCullough designed the geometric-pattern goldenrod silk carpet with a print nicked from a detail on the Taj Mahal. The carpet is free of toxic backing, glues, dyes and chemical washes, plus its silk fibers have been spared the formaldehyde typically found in commercially available rugs. And plenty of that once-crated upholstered furniture, stripped to the frame and restuffed, is back home as well.

“I learned to consider our house as our third skin,” McCullough says, “and just like with our skin and clothes, we feel better when we’re surrounded by natural materials. Once you realize how good you feel, you don’t go back.”

The swank Platner dining chairs—so comfy they encourage dinner parties to drag on well past a commonsense hour—are a vintage score from nearby Lincoln, Mass., known for its midcentury architecture. But the added benefit is that their composition—leather and metal—let McCullough and family breathe easy. Upstairs in the renovated master suite, a pair of 18th-century Shanxi-province screens separate the bathroom from the bedroom. The carved-wood screens underwent an extreme spa treatment before their arrival: They were stripped of their varnish in Hong Kong, slathered in a natural formula containing thyme oil (which repels mold), crated, shipped and finally refinished here with a nontoxic lacquer. Several months in a container, as it turns out, is just an invitation for mold spores. (Paris flea-market shoppers, take note.) And for that reason, the human-size reclining carved-wood Indonesian Buddha lounges in the pool loggia, a most stylish exile.

It was essential for McCullough, an unrepentant color lover, to find alternatives to potentially toxic commercial paint. Though many homes renovated with attentiveness to health and sustainability embrace concrete, plaster and wood in their natural states—and are in turn awash in neutral shades—the designer wouldn’t have it. The kitchen, basement level and hallways are painted with clay- and lime-based formulas from BioShield, producing the best-case scenario for air quality because they “let the walls breathe,” she says. Even for the more jubilantly colored spaces she was able to select from Ecos Paints’ wide range of environmentally friendly hues, as well as AFM Safecoat and Benjamin Moore Natura, which have zero emissions.

“Rooms have different needs, so I like to give each space its own character, to let it have its own meaning,” she says. The home’s palette draws directly from her trips to mountainous northern-Asia regions, including Mongolia and Bhutan as well as Shangri-La on the Tibetan plateau, where she sought embroidered textiles and rugs.

The living room, with brass shelving and a custom carpet McCullough based on tiles in the Taj Mahal.  MONICA SPEZIA

Some of the renovation obstacles had nothing to do with wellness. “I was really struggling with the American idea of a mudroom—a mess of hooks and coats and open shelving,” McCullough says. Her fix was to conceal the storage with a wall of dramatically oversize yellow doors with metal studs and huge handles, inspired by Chinese palaces. The hue is dubbed Middle Kingdom Yellow. “Red would have been the expected idea for Chinese-inspired doors, but when Ronan said yellow, I immediately seized on the reference to the Forbidden City.”

And as if by fate, two rooms were already dressed in jewel tones when the McCulloughs arrived and remain the same today: the dining room, with peely, original midnight-blue flocked-velvet wallpaper—so old it’s new again—and the red-painted sitting room with a fireplace, dubbed the Negroni Room.

A Buddha from Indonesia.  MONICA SPEZIA

“People gravitate toward spaces that are cozy and warm and fun,” she says. “I’ll light a fire in there and my kids will say, ‘Mum, can we please go into the Negroni Room!’ Even from a young age, you crave that.”

But the most rewarding part of the home cannot be seen at all, of course. “Oh, I felt better right away,” McCullough says. “Reduced inflammation—that means less body pain, I stopped the incessant sneezing. Now I can sit with my family and look around the home we’ve made together. It’s like flipping through a photo album of my life.”