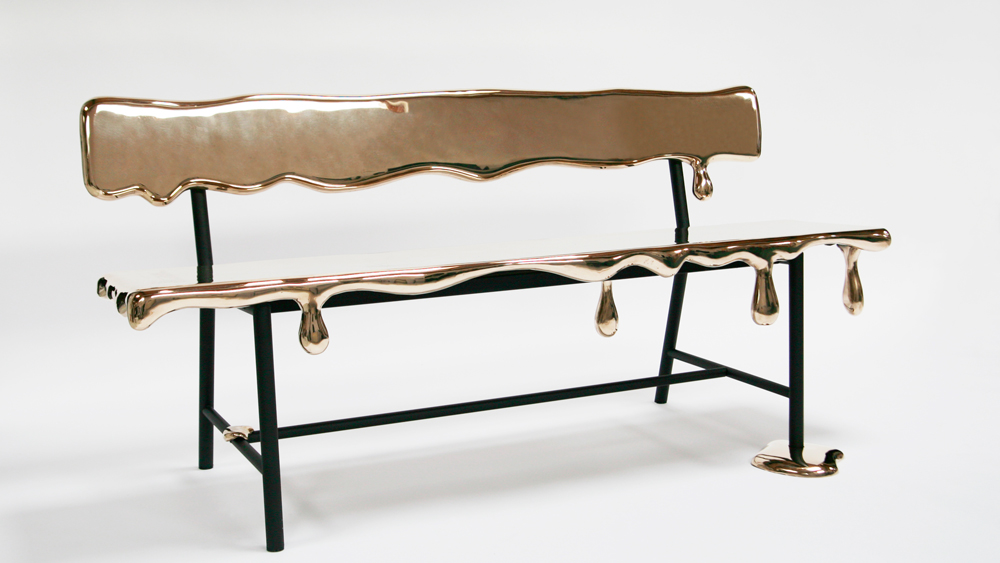 Since its inception, the New York–based art fair called Salon Art+Design has sharpened its focus on the work of cutting-edge designers and artists. And the seventh edition is getting ready to run at the Park Avenue Armory on November 8 through 12. Says Jill Bokor, director of the event, “While the fair has gained a reputation for its strength in mid-century-modern furniture by such luminaries as Jean Prouvé and Gio Ponti, the work of younger designers is really coming to the fore now.”

A case in point is Dutch designer Reinier Bosch, whose high-polished Melt pieces look like beautiful puddles of precious metal. His elegant Dew bench dripping in bronze (pictured above) is bound to be a highlight, as is the work of Alex Chinneck, who brings his beguiling sculpture to the show in the form of Growing Up Gets Me Down, a sinuous wooden grandfather clock that looks like a relic from Alice’s Wonderland. Both artists—thirtysomethings with impressive résumés—are headlining for the Dutch gallery Priveekollektie Contemporary Art | Design, one of dozens of galleries at the show focusing on fresh talent.

Of particular note, says Bokor, is the number of dealers offering spectacular lighting, from covetable European works offered by Galerie Kreo of Paris to pared-down pieces by Amsterdam-based duo Andrea Trimarchi and Simone Farresin of Formafantasma, which are being presented by Giustini/Stagetti of Rome.

The growing demand for personal enlightenment? Bokor suggests it is largely in response to the increasing cookie-cutter nature of so much new real estate. “A spectacular designer lighting element can pack a powerful punch even in the smallest of rooms.”