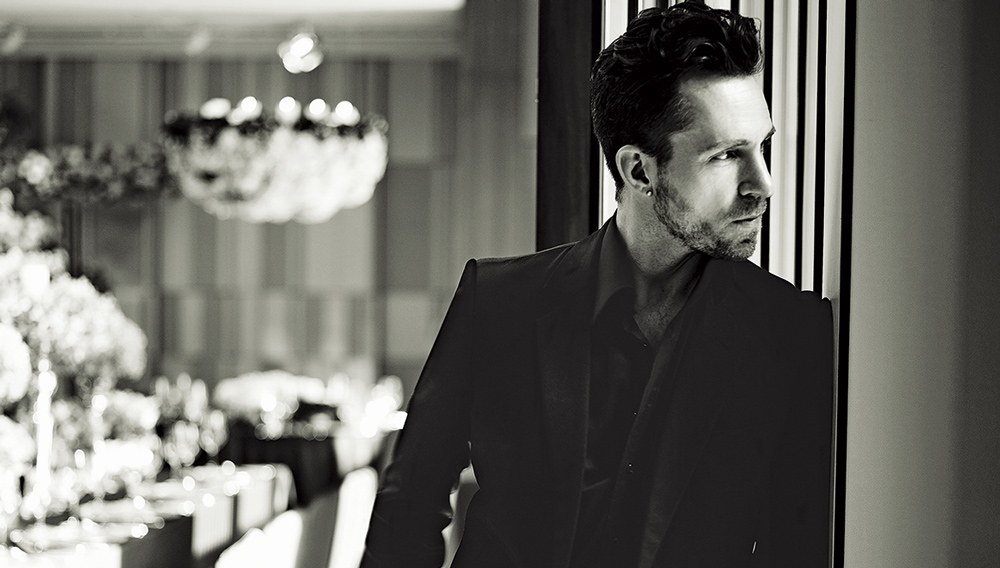 Sauntering through the lobby of the Four Seasons Hotel George V in Paris, fashion designer Donatella Versace paused, bewitched by the floral arrangements. With a sweeping gesture, she asked her entourage to take photos of everything, and then she sailed on, perhaps intending to savor the botanical splendor later. Jeff Leatham enjoys recounting this, for Versace’s reaction is the kind he adores. As the artistic director of the venerable hotel for the past 16 years, Leatham has conjured striking, chromatic floral displays—sultry red roses in the Salon Louis XII , an overhead cascade of purple orchids in the Cour de Marbre—that have elicited more than a few delighted double takes.

“The goal,” Leatham says, “is to give clients an experience they’ve never had before.” That pursuit has earned him not only international acclaim but also a rare distinction: Last November in a ceremony at the Château de Versailles, the floral artist was named a chevalier of the Order of Arts and Letters, an honor bestowed by the French Ministry of Culture and Communication.

Each week at the hotel, Leatham, with a team of 12 assistants, oversees the installation of 14,000 blooms—stunning orchestrations that fuse his design métier with the ephemeral drama of flowers. “We’re always doing something different,” he says. “We’re constantly innovating.” He is known for his daring, unexpected styles, the most recognizable being his leaning arrangements: The stems angle forward from their suspended placement at the upper end of a vase, and the blossoms drape glamorously, like ingenues striking poses. Color, he adds, is his muse.

He brings his palette to high-wattage affairs and special occasions—launch parties for Bulgari; weddings, like his good friend Tina Turner’s—but his latest commissions hit closer to home. Leatham’s studio in Los Angeles is busy with work for residential clients. “I love doing flowers in people’s homes because it’s about the personality of the individual,” he says. “The biggest luxury someone can have is flowers in their home on a weekly basis.” He also does private events. “Sometimes a private dinner for 20 is more fun for me to do than a party for 500, because you notice the flowers more.”

Leatham enthusiasts, take notice: Jeff Leatham: Visionary Floral Art and Design—his third book in 12 years—was published by Rizzoli late last year. And later this year his third collection of Fleurology vases for Waterford will be released, as will his home fragrance line, including a candle named Voodoo Rose.