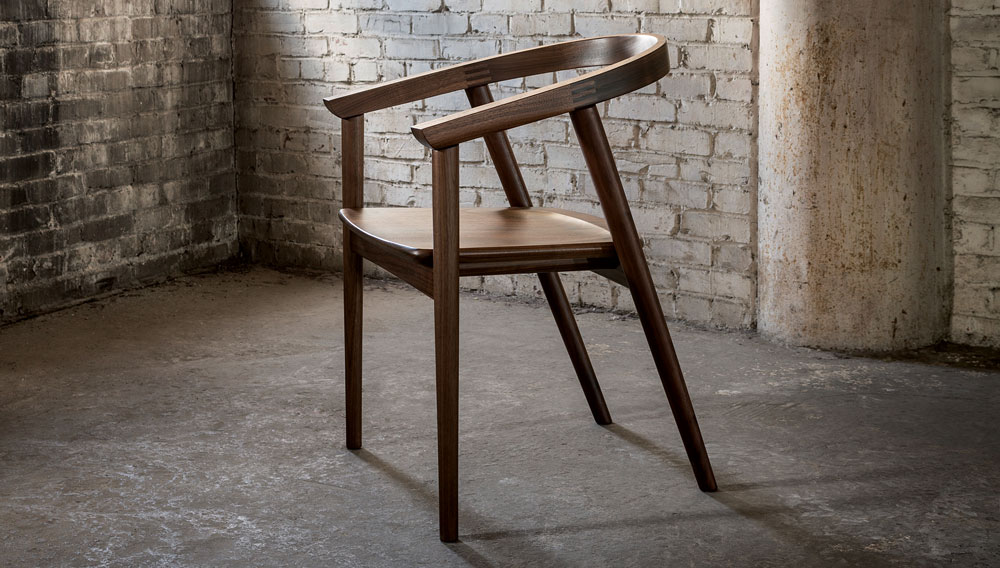 Thos. Moser’s distinctive craftsmanship only gets better with age.

Some birthdays are major events: firsts or milestones. In March, the revered designer and woodworker Tom Moser found himself in the glow of 80 birthday candles, at the opening of his namesake company’s new 5,000-square-foot showroom in Washington, D.C. It was the kind of double celebration—a personal landmark for him, a debut venue (and sixth U.S. shop) for his artisan furniture brand—that feels especially momentous.

The event that started it all dates to 1972, when the self-taught craftsman left his professor post at Bates College to found Thos. Moser. He set to work fashioning earnest, classic, handmade American furniture with traces of Shaker influence. “At the time, he was restoring the lost art of woodworking,” explains Adam Rogers, director of design and product development for the Auburn, Maine–based company. “And he was creating a community of craftspeople who love what they do, and could make a living doing so.” Moser’s wife, Mary, was his essential other half in the business, and their four sons apprenticed in the workshop.

Today more than 60 craftspeople, many of whom have worked for Thos. Moser for more than 20 years, create roughly 6,000 original pieces per year. One craftsperson is dedicated to one piece, shepherding it from his or her workbench to completion, when it receives its maker’s signature. Only American hardwoods are used—walnut, maple, cherry, oak, and ash—and everything is about technique. Quality control, notes Rogers, includes the artisans running their hands across the pieces, seeking imperfections. Ultimately, it is their skillful handling that produces seamless examples of the Continuous Arm Chair, a stripped-down Windsor-style creation that Moser originally made in the 1970s from cherry and ash (the chair now comes in walnut also), and the Newport, another Moser-designed chair referencing the 1700s.

The furniture is best described as true craft, not product, says Rogers, whose own designs for Thos. Moser include the Cumberland furnishings series. He is also working on a ladder-back chair called Hancock and a living room collection called Hartford. Mindful of the brand’s heritage, he adheres to three aesthetic principles: “The first is the elevation of craftsmanship through design, whether that’s exposing the joinery or exposing things that are understandable; the construction is somehow evident,” says Rogers. “Second is respect for natural materiality of wood—not overdetailing or sculpting but letting the essence of the material have a voice, not only in the process but also [in] the result itself. And finally, keeping it simple: There is an emphasis on form and scale and detail.”

This emphasis is thoughtfully displayed in the new D.C. showroom, which reads like a living gallery of the company. Artifacts include a stack of raw wood; a pegboard from the workshop; a 40-foot-long, hand-carved Thos. Moser sign; and large-scale, black-and-white images of the original crew and the founder himself—mileposts worth celebrating.