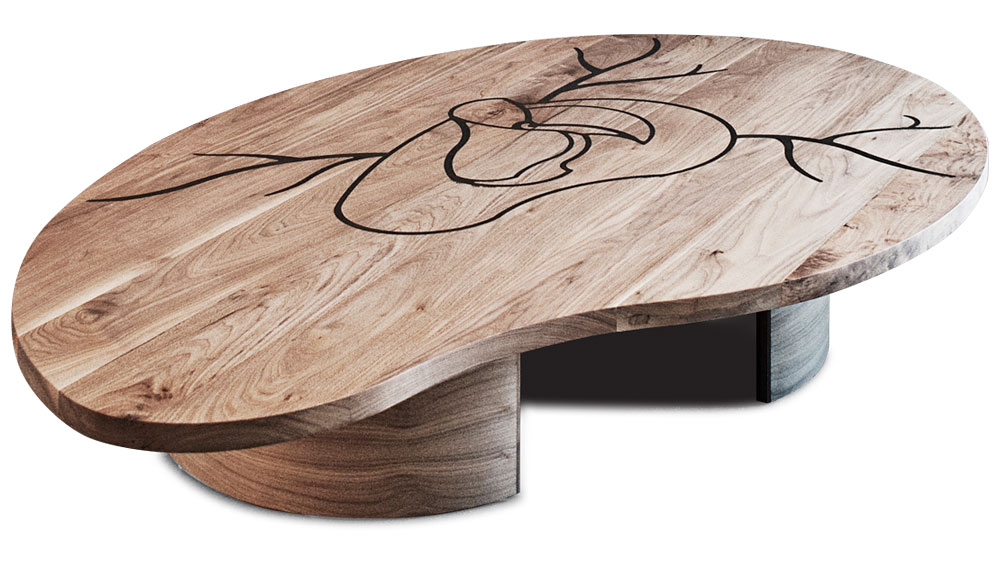 Using natural woods, bronze, soft linen, and rich leather, the architect and designer Gulla Jonsdottir has created her debut line of furniture, the Tree Collection ($1,200 to $33,500). The 12-piece series mixes organic forms and contemporary styling and includes such standouts as the Split Chair, whose back resembles a tree hollow, the Daliesque Lace Mirror, and the Wood Tulip Table featuring a solid walnut top with brass inlay. 310.275.1401, www.gullafurniture.com

At just over 645,000 square feet, Technogym’s recently opened Italian headquarters spreads over a 37-acre site that includes production facilities, a wellness center, a restaurant, and an organic farm. The facility, designed by Antonio Citterio Patricia Viel and Partners, is open only by invitation to Technogym clients who want to learn about, try, and acquire the company’s customized fitness products. 800.804.0952, www.technogym.com

The British designer Tom Dixon, known for his avant-garde creations, has fashioned the Cell line ($535 to $660) of pendant lights with layers of etched polished brass. Opaque when unlit but translucent when illuminated, the pendants come in two sizes that can be clustered together to form a chandelier. +44.207.183.9732, www.tomdixon.net

Since 1908, this French company has been known for its classic and colorful vaulted ovens and ranges. Now the company has released its first new line of kitchen items in 30 years. In the Cornue W collection ($7,500 to $26,500) by the designer Jean-Michel Wilmotte, kitchen appliances have the appearance of today’s streamlined furniture. The series includes an induction cooking range and hood and a vaulted oven tower. 800.457.1356, www.lacornueusa.com

This summer, Amanresorts is hosting guests in several new or newly restyled European properties. In Greece, on the Peloponnese peninsula, the recently opened Amanzoe (from $1,033 per night) features 38 freestanding accommodations, each with its own pool, by the architect Ed Tuttle. The new Aman Canal Grande Venice (from $1,285 per night), which was scheduled to open in June, offers 24 suites within a refurbished 16th-century palazzo. And earlier this year, in a former 15th-century fishing village in Montenegro, Aman Sveti Stefan (from $814 per night), which has been opening in stages since 2011, completed its unveiling by opening its last phase of accommodations, an infinity-edge pool, and a spa. The property’s 50 rooms, designed by Jean-Michel Gathy, are located on a 3-acre private islet and in the beachside Villa Miločer across the bay. 800.477.9180, www.amanresorts.com

Guests of ME London enter the lobby at the base of a 10-​story triangular atrium—just one of the striking elements at the Foster + Partners–designed hotel (from $511 per night), which opened in March. Black marble corridors lead to bright white bedrooms in the chic accommodations, while the public areas, such as the rooftop terrace, provide similarly stylish retreats. 888.956.3542, www.melondonuk.com

The Beverly Hills Hotel and Bungalows

The famous Polo Lounge at the Beverly Hills Hotel has had some work done. Adam Tihany, the New York–based designer known for his work on the French Laundry and Per Se restaurants, kept the now 73-year-old Polo Lounge’s green and white motif, but freshened up the carpets and upholstery and added details—vintage mirrors, historic photographs—that recall the property’s early days. 310.276.2251, www.beverlyhillshotel.com

Set on the island’s bay of Porto-Vecchio, La Plage Casadelmar (from $490 per night) opened last year in a preexisting structure that underwent a renovation. For the refurbishment, the French architect Jean-François Bodin used volcanic rock, cement, resin, and glass, and a color palette of green, turquoise, and brown. The open-air lounge and restaurant are open to the public. +33.4.95.71.0230, www.laplagecasadelmar.fr

Newfoundland’s Fogo Island measures less than 100 square miles, and its position is northerly enough that summer temperatures rarely rise above the mid-70s. In May, just in time to take advantage of the season’s longer days, the 29-room Fogo Island Inn (from $550 per night) made its debut. The Canadian-born, Norway-based architect Todd Saunders created the property’s two intersecting boxes of wood, glass, and concrete; together they form a striking design that overlooks the rugged coastline and the icebergs offshore. 709.658.3444, www.fogoislandinn.ca

Earlier this year, Oil Nut Bay, the yachting and real estate development on Virgin Gorda, completed its three Cliff Suites (from $795 per night). Two of the three OBMI-designed one-bedroom accommodations measure 890 square feet, while the third—the penthouse—spans 1,334 square feet and includes Fendi Casa furnishings and a private swimming pool. All of the suites feature stone construction and grass-covered roofs that help them blend into their hillside perch. The units are available to the community’s homeowners and prospective buyers, as well as to travelers seeking private villa rentals with resort-style service and amenities. 284.393.1000, www.oilnutbay.com

Auberge du Soleil hotel and spa, originally designed by Michael Taylor in 1985, has updated its California wine country aesthetic with eight newly styled, South of France–inspired suites (from $1,000 per night) by the designer Suzanne Tucker, Taylor’s protégé. In the Napa Valley town of Calistoga, nestled in a canyon, Calistoga Ranch (from $685 per night; see Smart Showings) has refreshed its 50-room property with in-room iPads, renovated outdoor shower gardens, and new hiking trails. Nearby, refurbishments at the more casual Solage Calistoga (from $360 per night) include a warmer color palette, more luxurious bedding, and soaking tubs in each of its 89 rooms. 415.380.3460, www.aubergeresorts.com [S.B.]