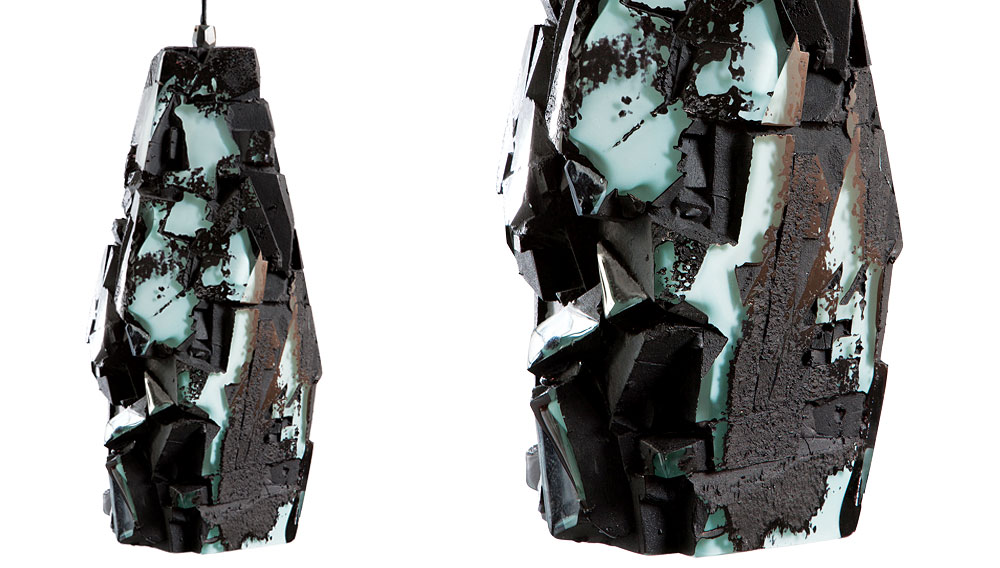 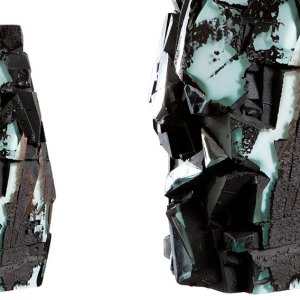 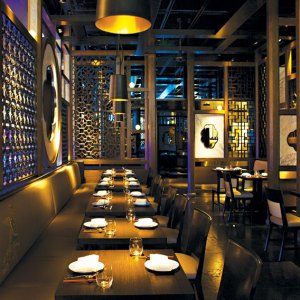 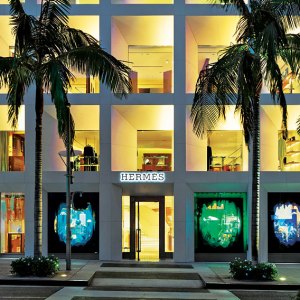 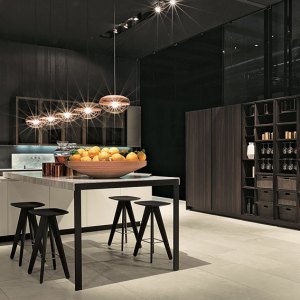 This 16-inch-tall Facet Assemblage hanging lamp ($7,500) by Thaddeus Wolfe combines colored layers of glass that are hand-blown, cut, and polished—lending a futuristic aesthetic to an otherwise traditional object. Part of the 34-year-old designer’s Assemblage series, which includes vases and other lighting, the design began as an exploration of mineral forms found in nature and evolved into a piece that, according to its artist, references Brutalist architecture. Available through R 20th Century, 212.343.7979, www.r20thcentury.com

Two recent unveilings in Beverly Hills have the city feeling blue. On Beverly Drive, Hakkasan made its Southern California debut with a 10,000-square-foot space befitting of the London-based chain of upscale Chinese restaurants. Designed by the French firm Gilles & Boissier, the new outpost highlights the brand’s signature blue hues at the 66-foot-long bar. And about a block away, Hermès reopened its Rodeo Drive location, revealing a renovated space designed by the Paris-based firm RDAI. The three-story, 12,000-square-foot flagship features various items—from a diamond-encrusted Collier de Chien bracelet to a scarf featuring palm trees reflected in a swimming pool—made in a blue hue just for the Beverly Hills location. The top floor is dedicated to the brand’s home items, which range from porcelain and chess sets to furniture and wallpaper. Hakkasan Beverly Hills, 310.888.8661, hakkasan.com; Hermès, 310.278.6440, www.hermes.com

A 60-degree angled door edge is the defining mark of Varenna’s new Artex kitchen (from $20,000). The design eliminates the need for handles and helps to maintain the kitchen’s sleek silhouette. Artex is the company’s seventh kitchen line; each varies by the thickness of its doors and the shapes (or lack) of its handles. Cabinets are available in eight kinds of woods, 33 embossed lacquers, and 17 glossy colors, as well as in glass and steel. 212.421.1800, www.poliformusa.com

For its newest runabout, which launched this summer, Chris-Craft combined the retro lines that the 139-year-old American boatbuilder has long been known for with modern materials and details that give it a sleek and contemporary look. The resulting watercraft, the Capri 21 ($67,296), offers teak wood surfaces, stainless-steel accents, and upholstery in a selection of colors, as well as a large sun bed. 941.351.4900, www.chriscraft.com

It might appear as though the Pixel table (about $1,500), with its geometrically stacked squares resembling a Tetris challenge, was designed with a sophisticated computer program, yet the piece—like all of Be+Have’s furnishings—was made entirely by hand. Composed of lacquered medium-density fiberboard and unpolished brass, the Pixel tables are available in turquoise, black, white, and beige and limited to 20 examples per year. www.beplushave.com

Since opening its first showroom in Chicago in 1983, Holly Hunt has added a number of other U.S. locations and a few international outposts. Now the company has landed in Brazil, opening a store in São Paolo’s design district. The 4,210-square-foot space—once a private residence—features large grid windows, a retractable roof, and an interior patio. All of the brand’s furniture, lighting, and textiles are represented, but certain pieces have been redesigned with a lower profile to suit Brazilian tastes. +55.11.3063.3189, www.hollyhunt.com

A new 35-piece furnishings line from the interior designer Eric Arthur Dyer weds a sophisticated Asian aesthetic and the meticulousness of fine European craftsmanship. Each made-to-order piece can be rendered in a variety of colors, though neutral hues tend to best complement the low profile of the sofas, tables, and beds. Wool felt upholstery covers the Milan bed (from $15,996), which has oak wood rails flanking the headboard. A black zipper detail runs along the edges of the headboard, footboard, and nightstands. 800.403.8310, www.arthur-collection.com

Out of the collaboration between the French crystal house Baccarat, the

interior design firm Pierre-Yves Rochon, and the fittings manufacturer THG has flowed THG’s Pétale de Cristal series. The faucets in the line draw their inspiration from the lotus flower and have clear crystal handles or versions abloom in red, black, or blue. Prices begin at $6,400 for the clear crystal taps; the cost of a five-piece Roman tub filler set can reach $32,500. 954.425.8225, www.thgusa.com

The Dutch designer Piet Hein Eek—known for his sustainable furniture made from reclaimed wood, iron, and steel—has designed a limited-edition box for Ruinart’s Blanc de Blancs. Each recycled pine box holds a bottle of the Champagne and is priced at $130. Made by hand in Eek’s Geldrop, Holland, workshop, the crates are lightly sanded and thinly lacquered to add texture and dimension, making them worth keeping even after the bottles’ corks have been popped. Available through Crush Wine & Spirits, 212.980.9463, www.crushwineco.com

As part of its 85th anniversary celebration, the Peninsula Hong Kong has given its 2,289-square-foot Marco Polo Suite an elegant makeover. Tones of dove gray mix with wood-paneled walls, chinoiserie-inspired furnishings, and embroidered silk panels, while modern touches include LED touchscreen panels that control lighting and draperies. From about $14,000 nightly. +852.

The designer Sybille de Margerie has renovated eight suites at the ski-in/ski-out chalet, using a palette that complements Cheval Blanc’s taupe and yellow tones and relying on materials such as cashmere and leather. Two of the suites are duplexes (one shown; priced from about $5,575 nightly), each of which has a sauna or bathtub that converts into a massage bed. +33.4.79.00.50.50, www.chevalblanc.com

Harvey Probber is credited with having invented sectional seating in the 1940s, and in 1972, the furniture designer created the Deep Tuft sofa. Until now, that piece had been obtainable only through auctions and vintage stores, but M2L’s reissue makes Deep Tuft ($16,145 as shown) available in three basic units: seat; seat and back; and seat, back, and arm. 800.319.8222, www.m2l.com

To follow up her inaugural, 10-piece furnishings line of two years ago, the interior designer has released DE+, a capsule collection that also consists of 10 pieces (priced from $6,800 to $29,700; Élan bar shown). Most showcase the juxtaposed textures—rustic woods against metal accents, for example—that are her hallmark. Available through Jean de Merry, 323.655.9193, www.jeandemerry.com

Once again the maker of hand-knotted rugs has the floor, this time with a line ($1,195 to $14,688) designed by the late Alexander McQueen’s namesake fashion house. McQueen creative director Sarah Burton has turned flora and fauna motifs into kaleidoscopic patterns. The Night Poppy wall hanging is among the pieces available from the Rug Company starting in November. +44.20.7908.9990, www.therugcompany.com