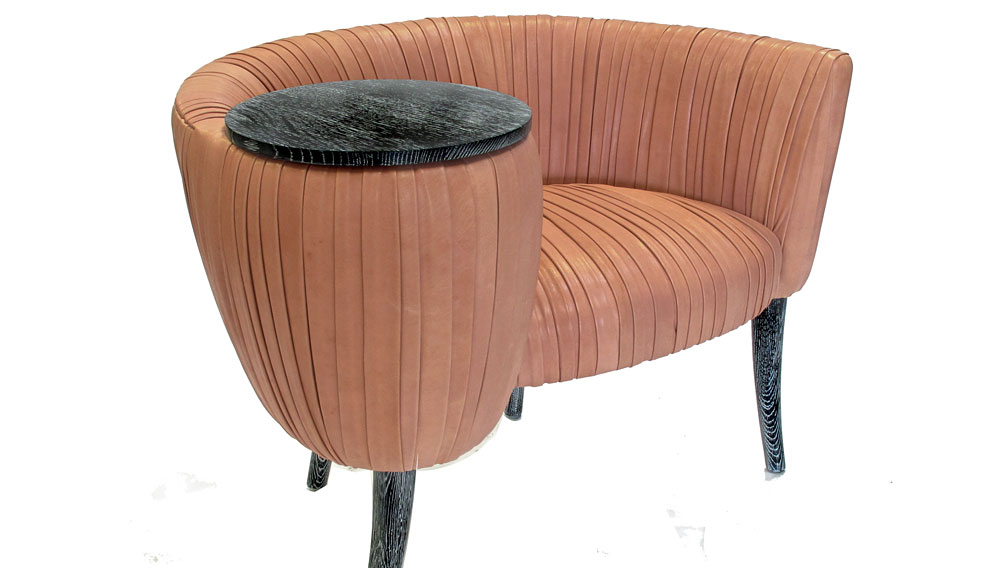 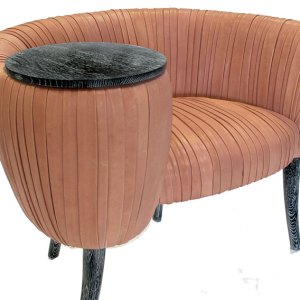 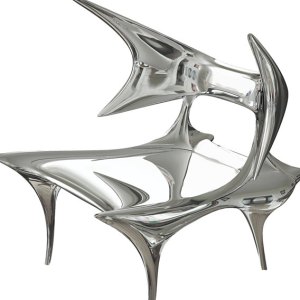 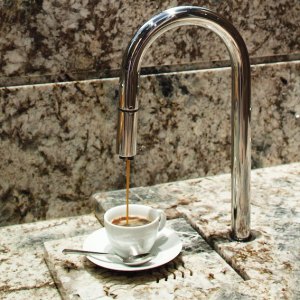 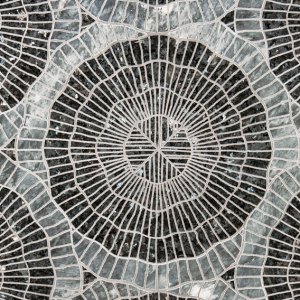 Cheers to the new Souffle cocktail chair, which the Los Angeles–based designer Kelly Wearstler (855.295.3559, www.kellywearstler.com) created to look as attractive against a wall as it does in the center of a room. “The back has gathers of ruching, which I really love, and there’s a lot of well-finished detailing to both the back and front, so it works from all angles,” says Wearstler. The seat ($6,950)—a variation on her trademark Souffle chair, which debuted several years ago—has cerused oak legs and comes in about 10 colors of lambskin. The finely inset tabletop alone is worth drinking to.

The latest design from Craig Van Den Brulle—who fills his eponymous Manhattan shop with finely curated 20th-century furnishings and art, as well as furniture, lighting, and art of his own creation—is the Darboux chair ($76,000). He used a 3-D printer to create a mold of the design, which in its finished form is limited to 10 examples in stainless steel and five in stainless steel with a gilt-bronze finish. 212.925.6760, www.craigvandenbrulle.com

Chicago’s River North area is home to a new 5,000-square-foot nuHaus showroom that highlights the kitchen company’s Bauhaus-influenced aesthetic. Customers can browse the space’s five vignettes, including two for Downsview cabinetry, one for La Cornue ranges, and one for nuHaus’s own cabinet designs. Scanomat’s TopBrewer (shown, $9,000) is also on display, in its exclusive North American debut. The Dutch device dispenses brews from espresso to macchiato via a tap controlled by an iPad or iPhone. 312.595.1330, www.nuhaus.com

A London institution since its 1973 founding by the designer Sir Terence Conran, the Conran Shop has evolved into a home-goods brand with an international presence. Stores from Paris to Osaka offer the company’s furniture, lighting, and accessories, and the popular Marylebone location (on London’s Marylebone High Street) has recently been renovated. The space now includes the Conran Kitchen café, a flower shop, and the Conran Apartment, the store’s top-floor display of contemporary pieces mixed with classics from the likes of the Eameses and Paola Navone. +44.20.77.23.2223, www.conranshop.co.uk

Recently introduced ceramic and glass tiles from the Kohler-owned brand lay the groundwork for a look that is beyond conventional. Standouts include Scribe (shown), carved-in-relief tiles that resemble ancient mosaics; Versailles Mesh, pieces that incorporate 18th-century mirror-making techniques; and Tidewater, tiles conceived by the architect Rodolfo Dordoni to recall rippling water. Prices range from $13.50 to $343.75 per square foot. 800.278.8453, www.annsacks.com

Aged cherry wood and polished bronze marry beautifully in the new Ball & Chain table ($11,800). Though influenced by the traditional Shaker table, the piece is made modern by the whimsy of the metal ball. The men behind the design, Brian Thoreen and Brant Ritter, employ their architecture backgrounds in all of their projects, which range from restaurant interiors to bespoke tables and sculptures. 213.477.1978, www.thoreenandritter.com

A scene from the 2010 film Inception inspired the design of Chi Lin, a new Chinese restaurant from Innovative Dining Group (Boa, Sushi Roku, Riva Bella). Located in a windowless space adjacent to the city’s Sierra Towers residential high-rise, the main dining room features 300 lanterns that cling to the ceiling, casting a warm glow over the tables and chairs while infinity mirrors create an optical illusion of a white butterfly’s path. The menu—pork belly lettuce cups, steamed Chilean sea bass, seared A-5 Japanese wagyu beef—reads like a dream indeed. 310.278.2068, www.chi-lin-la.com

New from Moooi, whose furniture collection has included Dali-esque clocks and basketlike chairs, are floor lamps with shades resembling buckets, bar stools that recall chess pieces, and four new sofa collections, including Zliq ($7,889 as shown). Variously sized segments of the seating design can be rearranged to form a number of configurations, from a sectional to a large square. Eleven patterns and materials are available. <+31.76.578.4444, www.moooi.com

Martin Kastner has designed tableware for Eric Ripert’s Le Bernardin, and his creations recently caught the attention of Kim Crawford. The winery tapped his talents for the making of a cooling sleeve ($149) for its Sauvignon Blanc. The limited-edition apparatus, made from metal links and gel-filled caps, is meant for freezing and then sliding over the bottle like a bracelet. 888.659.7900, www.experiencekimcrawford.com

Leather straps and gold buckles emblazed Gianni Versace’s Bondage collection from 1992. The fashions have proved to have staying power: A dress recently sold at auction for more than $9,000. So it is no surprise that Haas Brothers would create for Versace Home a furniture line influenced by the apparel. The Stud Club armchair ($94,000) is part of that 12-piece collection. +39.02.0062.0850, www.versacehome.it

Beds, bedding, and accessories are the heart of the aptly named Sleep Studio, which opened a flagship store in SoHo in June. The modern space has travertine marble floors, walnut woodwork, and light-to-dark room transitions, and offerings include beds by Poltrona Frau, custom bedding made from Italian linens and silks, and home fragrances by Red Flower. 212.679.6679, www.sleepstudio.com

Ron and Ann Pizzuti spent decades amassing art before founding their own museum. Opening in September, the 18,000-square-foot space will house their collection and display other works, such as this piece made of red Legos—Kosmaj Toy by Los Carpinteros—as part of an opening exhibit, “Cuban Forever.” 614.280.4004, www.pizzuticollection.com

To honor what would have been the late Robert Mondavi’s 100th birthday, his eponymous winery has teamed up with the furniture designer Frank Pollaro to create six tables. One will have a place in the winery, while the other five will be available for sale. The Centenary table ($75,000) includes 100 wine cork–sized inlays of persimmon wood. 908.206.1888, www.pollaro.com