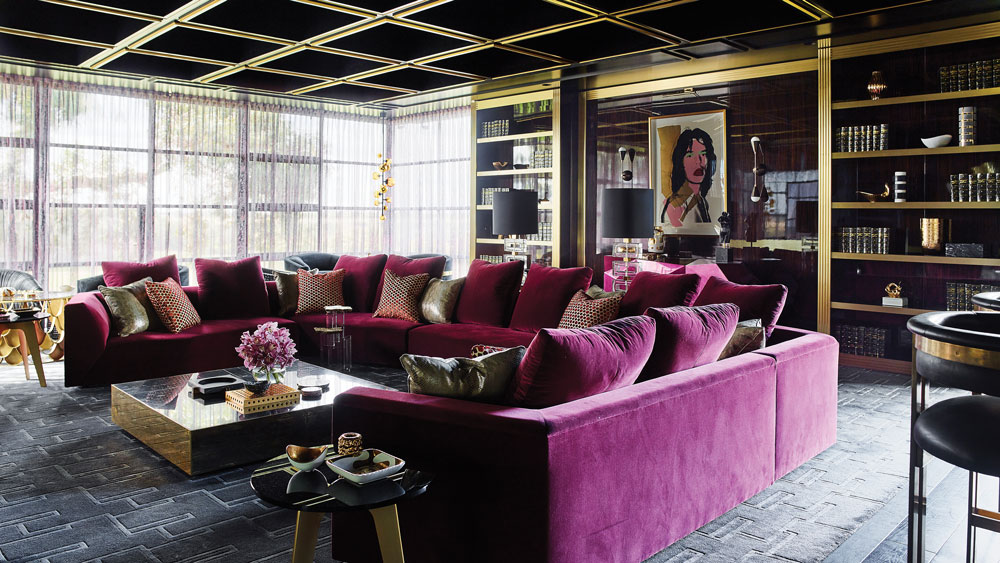 True auteurs don’t play games. They know exactly when to resist convention and when to bend it for serious aesthetic impact. For a home in Australia’s rural Victoria state, award-winning designer Greg Natale began confidently (and boldly) at the end.

Natale, whose studio is based in Sydney, Australia, had designed four previous residences for the client, a fashion-industry executive with a family. His singular approach would have been unthinkable without the client’s trust, which was built over several years. The home, a sprawling 16,200-square-foot dwelling, sits on 600 gracious acres that used to be a horse farm. Natale also handled the architecture, stripping everything back to its structure and cladding the exterior in black Tasmanian oak. He brought in his frequent collaborator, landscape designer Myles Baldwin, to “line up the architecture with the land-scaping.” The centralized management of all these elements ensured a rare aesthetic consistency for such a huge undertaking.

“The client has a real love of timber,” recalls Natale, by way of explaining the pervasive presence of wood inside and out. “Internally, it is present in every single room.” The interior is moody and dark—partially for respite from the scorching Australian sun, but mostly because it creates the richness the clients desired, says Natale. He also happens to have built a career on his predilection for dramatically dusky interiors that serve as backdrops for a style he describes as “very tailored, layered, with a lot of subtle pattern, and a sense of glamour and contemporary opulence. I have pushed this look from day one. It started with my first apartment and evolved over the years.”

Of course, there are potential hazards to a shadowy palette that only a designer as adroit as Natale can sidestep so elegantly. “Because the house was so big, we needed color to break up what could have been an overly dark interior,” he explains. “Rooms could have just blended into each other.” Fuchsia and bright blues supply the color interventions. Natale lifted the azure of the banquette and ottomans from Anna Berezovskaya’s Melody for Flute in the library; the anteroom’s chairs owe their aqua cast to a large painting by famed Australian artist Dale Frank; and Boca do Lobo’s fuchsia Diamond sideboard, as well as a Vioski sectional, draws inspiration from Andy Warhol’s hot-pink portrait of Mick Jagger.

The designer’s strategies for animating the cavernous spaces included other tools. “There isn’t a surface treatment or finish that hasn’t been examined and exploited as much as possible for its decorative and visual impact,” he says. This extended to the ceilings, which were variously lacquered, coffered, adorned with patterned moldings, overlaid with brass grids, treated to beadboard, and more. “Who wants plain ceilings?” asks Natale. “They are such an underutilized part of the room, and I love to engage that fifth wall to create a cohesive, encompassing environment.” Extensive use of brass adds flash, providing surfaces to ricochet light around rooms.

All these distinguish individual spaces, while other elements—like the wood and the inky scheme—unify them. A chain-link motif, for example, “is another tool of cohesion,” says Natale. Introduced in the ground-floor main hall’s rug (an original Natale design) and matched with overhead molding, it reappears in the Bisazza glass mosaic walls of the bar’s powder room and on the rug in the entry off the garage. (Jewel-like faceted pieces such as the fuchsia sideboard and a mirrored entry sculpture by Mathias Kiss also jibe nicely with the client’s fashion background.)

This family manse is arguably the ne plus ultra paradigm of Natale’s style and holistic vision that seems to have sprung fully formed from his mind like Athena from the head of Zeus. “It really is a wonderful culmination,” says Natale, “an evolution of my own aesthetic brought to fruition with the support of an incredible client eager to push the boundaries and design outside the box”—and in reverse.