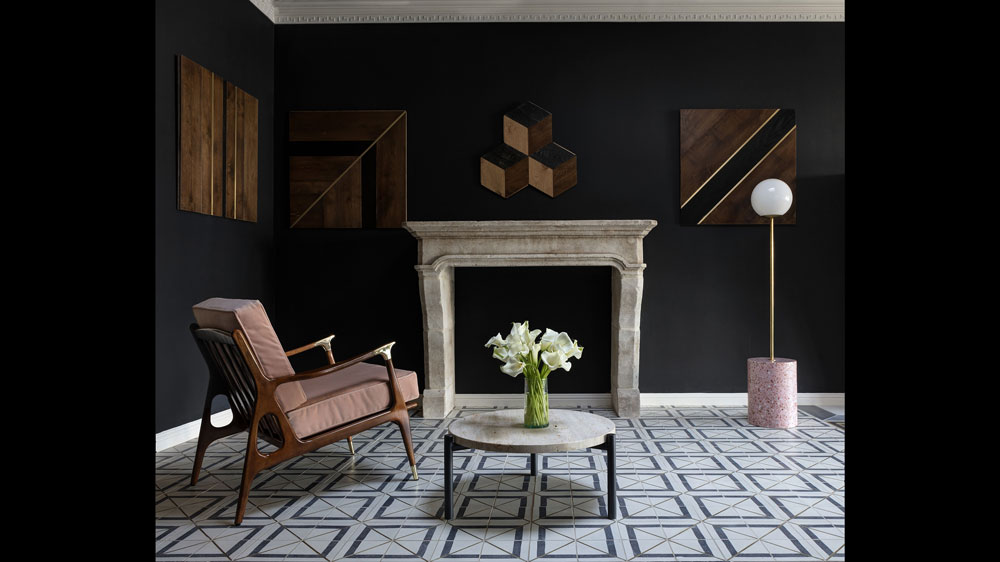 Thankfully, examples of Tabarka Studio’s designs were visible on the wall, as the Wednesday night opening for the artisan tile and flooring brand’s new LA showrooms was packed. Between the designer crowd and the Flamenco dancing performance (an excellent way to showcase the flooring), spotting Tabarka’s collection of handcrafted surfaces in stone, wood, mosaic, cement, and terrazzo might have been a challenge for the uninitiated (or those not in heels).

The event was something of a coming out party for the Scottsdale-based company. “Tabarka has been a secret source and private label for years to other surfaces brands,” Meir Zenati, the brand’s creative director, has said. “With our first showroom experience opening in L.A., we’re excited to mark a new chapter where we are presenting new work under the Tabarka name, as a fully realized lifestyle brand of our own.”

Most design insiders have sought out the company for their collection of hand-painted terracotta tiles. Distinguished by their color and pattern—more than 200 options exist—each tile is painted individually and has been known to star in kitchens and bathrooms that refuse to march into the great, white subway tile abyss.

While tile hasn’t traditionally earned top billing in the home, lately it has seen serious momentum. Major players are unveiling collaborations and brands are pushing the material’s aesthetics in unexpected ways. In U.S. cities like Los Angeles and New York, where tile is so embedded in the cultural and visual landscape, the emphasis on tile never diminishes. Still, cool surfaces are hardly a regional thing, as Houston designer Nina Magon demonstrates.

As Zenati has expanded Tabarka’s line, he has explored the juxtaposition of materials to create stylish updates with dimension. Petite Alliance is the company’s waterjet mosaic collection that incorporates wood and stone. The big debut this week was a special terrazzo flooring collection featuring brass inlay and the throwback chic of Southern California’s mid-century modern/Palm Springs glory days. “We chose terrazzo with inlaid brass accents to convey the elegance of this era…think glamorous mid-century homes of Trousdale, and the grand floors of Deco movie palaces of Broadway Theatre District in Downtown L.A.,” says Zenati of a collection that is much easier to view after the party has wrapped.