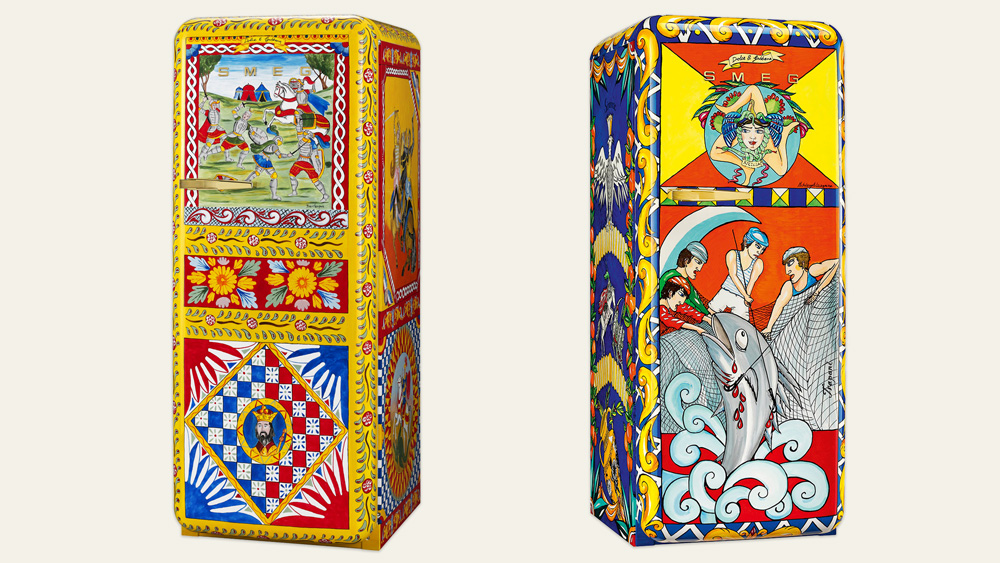 Can a refrigerator be a collector’s item? In the hands of Dolce & Gabbana, it’s more than possible. The luxe Italian fashion brand has reimagined the box as a canvas and enlisted a half a dozen artists to paint intricately fanciful designs in the impossibly ebullient hues and folk-arty patterns that are a shoutout to their home—the island of Sicily. Designers Domenico Dolce and Stefano Gabbana teamed up with another iconic Italian maker, SMEG, for an exciting marriage of fashion, design, and utility.

The limited-edition collection Frigorifero d’Arte (basically translated as “art refrigerator”) was introduced last year at the Salone del Mobile in Milan. And while Harrods in London is currently enjoying a major pop-up with a taste of Italy and a full-on display of the fridges as well as other D & G products, at least we can say that eight models finally are available in this country, exclusively at Neiman Marcus.

But the designers didn’t stop there. Now they are introducing a charming group of small appliances—no less flamboyantly decorated. These include a toaster, kettle, stand mixer, citrus juicer, blender, espresso maker, and slow juicer—though you’ll have to wait until spring to snap up one of these Sicily Is My Love models, which will start at $499 with the U.S. retailer to be announced soon.

The fashion duo has long celebrated its passion for all things Sicilian in everything from lipsticks bearing the names of Sicilian saints to wellies blooming with overscale roses. And on the runway, they’ve showered a whole lot of love on picturesque destinations like Lago di Como, Pisa, Capri, and Amalfi in gorgeous printed garments that are like walking postcards. So this collaboration with Smeg, which has its own made-in-Italy tradition, is a natural. Smeg’s uniquely shaped FAB28 model, a cool nod to the 1950s, is the perfect shape for wraparound art, with its gently rounded edges.

It takes artisans more than 200 hours to paint each model—not quite the time it took Michelangelo to paint the ceiling of the Sistine Chapel, but his was a much more grand scale. The subject matter draws from the trinacria symbol (the head of Medusa, a gorgon with a head of snakes), three legs, and three stalks of wheat in a triangular shape. The symbol is on the center of the Italian flag.

Also depicted is the rich imagery of carrettos or Sicilian carts, whose use in the 19th century became widespread as a transport for sacks of grain, citrus fruits, almonds, and wine barrels. Even today, the colorful carrettos are rolled out (still pulled by donkeys) during festivals and weddings, sometimes on religious feast days. The elaborate artistry on the wheels includes images of medieval knights and battle scenes, stylized flowers and fruits, and even folk dancers. The alliterative name of one of the refrigerators, Taratatá, conjures up the sound of the drum played during a traditional dance. All the joyful colors featured here are reminiscent of the often festive artwork on the packaging of Italian olive oil tins and biscotti or pasta packages.

If you can’t wait to pop an art fridge into your white kitchen, order one now—priced at $50,000 (plus $495 shipping)—and you’ll get it just in time for Valentine’s Day. Delivery is quoted for mid-February. Now that would be molto dolce for your amore.