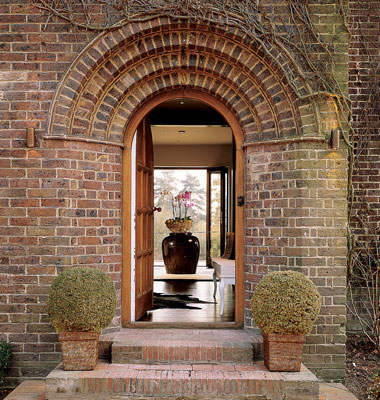 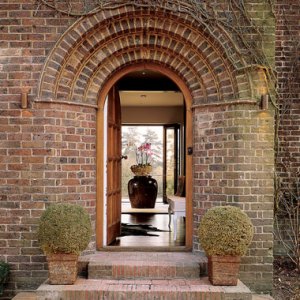 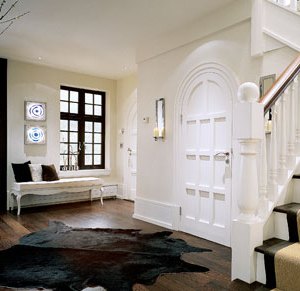 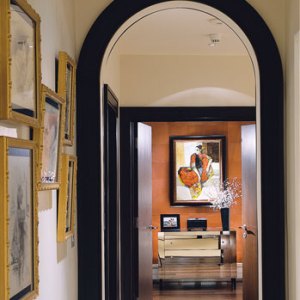 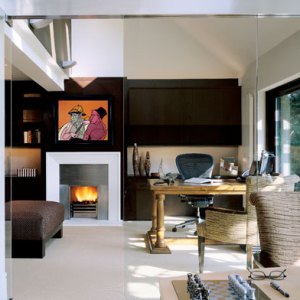 In the English countryside, 30 miles south of London, an Arts and Crafts brick manor has been reborn, transformed into a stylishly appointed, high-tech guesthouse. However, the exterior is deceiving, for it appears much the same as it did when the house was built nearly 80 years ago. When a 40-year-old venture capitalist and his 35-year-old wife were searching for a residence in the area called “the stockbroker belt” of Epsom Downs in Surrey, they toured the dwelling but decided it was too small to accommodate their four children and their staff. Instead, they acquired a larger, adjacent property. But when they learned that prospective buyers were planning to demolish the smaller, 5,300-square-foot structure—and perhaps replace it with a McMansion—the couple purchased it as well. “My mother-in-law spends a lot of time with us,” says the wife. “We have family that visit, and we’re always having guests, so it made sense to join the two properties and use this as a guesthouse and office.”

Initially, their plan was straightforward. “[The house] hadn’t been touched since it was built [in 1928],” says the wife. “Nothing had been upgraded.” The couple commissioned architect James Smiros of Smiros & Smiros Architects in Glen Cove, N.Y., to draft designs for “a simple clean-up job.” Smiros studied the structure and became convinced that it had greater potential and urged his clients to embark on a more sweeping renovation. The couple, who had worked with the architect on a residence and pool house on Long Island and a penthouse in Moscow, agreed.

“The house was well loved and lived in,” Smiros says diplomatically, “but by today’s standards it really required a total gut. Whatever patina and charm the exterior had, it was missing from the interior, which made it easy to decide to insert a very contemporary interior within the rustic shell.”

After repairing the terra-cotta tile roof, repointing brickwork, and replacing trellises, Smiros turned his attention to the interiors. “The English countryside, as pretty as it is, is not as sunny as you might always like,” he observes. “So we made all the openings between the rooms wider and taller to create more connectivity between spaces and to bring in more light.” At the couple’s suggestion, he lowered the windowsills at the back of the house to maximize the views of a formal garden, a golf course, and the rolling landscape beyond. In the office that the couple shares, the architect installed skylights and a glass partition between their desks that would not block the flow of light.

Upstairs, Smiros combined two bedrooms and a hall bath to create one large master suite with a sitting room. The other three bedrooms and two baths remained the same. The off-white walls throughout the guesthouse highlight the dark wenge millwork, floors, and trim.

Interior designer Lori Wolk, working with Smiros and the homeowners, used a mostly monochromatic palette and did not over furnish.

In collaboration with Smiros and the homeowners, Lori Wolk, an interior designer for the firm, furnished the spaces in an inventive fashion. “They’d done everything before,” she says of the couple. “A colorful Art Deco apartment in Moscow, a very traditional Nantucket [style] summerhouse on Long Island. And since this was a guesthouse, it didn’t have to fit the requirements of everyday family living, so they could have fun with it. They wanted it to feel very Zen and like a luxurious modern hotel.”

The low ceilings dictated much of the design. “We kept everything kind of low, the lines clean, and patterns minimal,” Wolk explains. “We also didn’t overload the rooms; they’re not over furnished.” The color palette is primarily monochromatic, employing camels and creams. Although the design is minimalist, it is hardly boring. There is a lot of play between hard and soft; stone and glass are juxtaposed with chenilles and supple leathers, while tribal folk art pieces add textural accents. “It was a charming house before,” says Wolk, “but now it’s chic.”

The lighting scheme—by Sanjit Bahra of Lighting Design International in London—adds drama and creates a variety of moods in the spaces. (LDI has completed lighting designs for the Dorchester, Savoy, and Grosvenor House hotels in London and for the Four Seasons Hotel Amman in Jordan.) “My approach is subtle layers of light,” says Bahra. “I use a combination of effects to create the overall ambience.” Bahra deployed an arsenal of technology and techniques: recessed spots and framing projectors to highlight artwork, xenon strip lighting concealed in cabinet joinery to illuminate bookcases, and recessed floor washers to shed pools of light on steps.

“During the day, lighting has been programmed to account for daylight streaming through the windows,” explains Bahra. “At night the bookshelf is illuminated, pictures are lit, and the room is instantly transformed. Press a button and the lighting changes to a low, evening setting, [press] another button and the atmosphere changes for a party setting, another and it goes to vacation mode, so that lights come on and off automatically to give the impression the house is occupied.”

These lighting elements and the husband’s international business dealings require state-of-the-art home technology. Matthew Tillman of Gibson Music in London, one of the largest dealers for Crestron and Lutron in Europe, provided the systems. “Every screen in the house has a computer attached to it, a hush box, so that [my client] can pull up stock quotes, upload family pictures, check security cameras,” says Tillman. Every TV also has access to a Kaleidescape library of CDs and DVDs, and to a Rotel sound system with Bowers & Wilkins speakers that pipes music throughout the guesthouse. Each room has a touch screen that controls the lighting.

Tillman also employed the latest web tablet technology, a Crestron WPR-48 waterproof remote control, so that his client can adjust his audio visual environment while floating in the pool.

All of this technology is accessible through the Internet from anywhere in the world; the couple can be vacationing in Long Island and still check on their property in Surrey.

“[The guesthouse] is certainly fresh, not what you’d expect to see in the English countryside,” acknowledges Smiros. “But in a lot of ways, it’s still very Craftsman-like in spirit: clean, neat, with a simple integrity.”