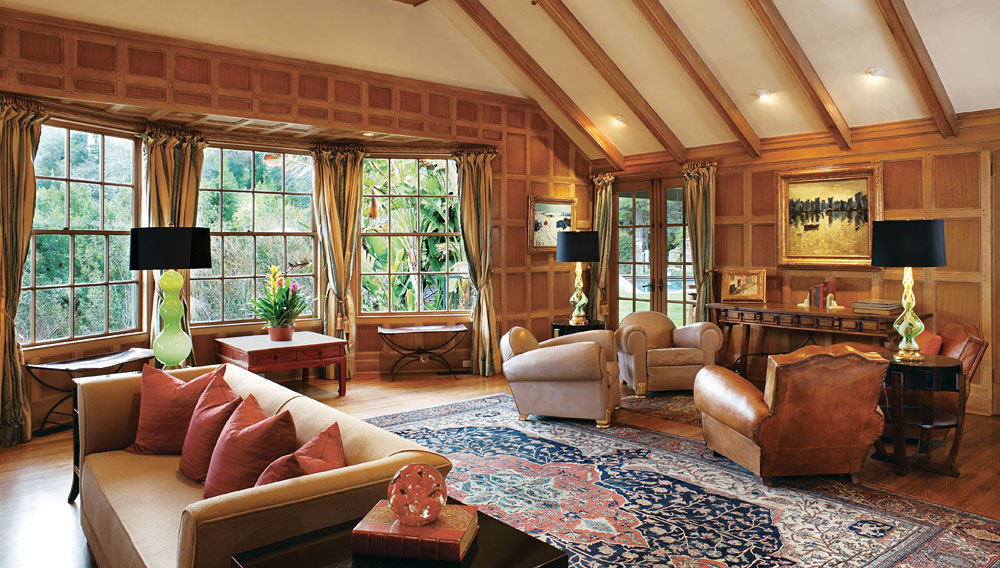 At least half a dozen bidders were staking a claim to the top lot in Sotheby’s sale of important carpets as the bidding opened on June 5 at the auction house’s headquarters in New York City. The prized artifact up for sale was a sickle-leaf, vine-scroll, and palmette “vase”-technique carpet that experts believe was woven during the first half of the 17th century, most likely in Kerman, the capital city of Iran’s Kerman province. Prior to the sale, Mary Jo Otsea, Sotheby’s senior consultant for rugs and carpets, placed what she believed to be a conservative estimate of $5 million to $7 million on the piece—the highest that she’s ever placed on a carpet.

Once the auction was under way, steady bidding for the piece soon supported Otsea’s suspicion that she had conservatively estimated the lot. By the time the leading price reached eight figures, only two bidders remained, but both continued to bid aggressively. With each claim, the carpet’s cost increased by half a million dollars until finally, after about 10 minutes of action, the hammer fell, and with it fell the previous record for an antique Oriental rug sold at auction. Prior to the sale, the record price sat at $9.5 million, but on the afternoon of June 5, Sotheby’s achieved a new benchmark—$33.8 million. “We haven’t had a sale like this in over 80 years,” says Otsea, who has three decades of experience selling antique rugs and carpets for Sotheby’s. “It was a once-in-a-lifetime opportunity to sell a piece like that, and the collectors who bid on it felt the same way.”

All told, the auction netted $43.8 million, with each of the 25 lots exceeding its presale estimate—an achievement that Otsea had never experienced before. Excluding the sickle-leaf carpet, the remaining lots all sold for an average of $305,000 above their high estimates, and Otsea suggests that the sale’s success could reflect the market’s future. “It may cause people to think a little more about carpets and to grant them a little more respect,” she says. “I would expect other people with early carpets will think about selling them. Clearly there’s a very strong market there.”

Jan Winitz, the founder and president of Claremont Rug Company (www.claremontrug.com) in Oakland, Calif., understands the intrinsic value of fine antique Persian rugs, and he’s tracked the market’s evolution since he founded his company in 1980. “Every now and then a rug like this will arrive,” he says. “It represents the highest achievement in the field in terms of color, the articulation of the design, and the overall balance and harmony that it pre­sents. That’s why this smashed all the records, because it was so rare. That being said, there are select pieces all the way through the 19th century that offer much of what this rug presents.

“A great rug possesses the ability to affect the mind and heart of man and allows him to see himself and the world that he lives in, in a new, profound way,” he continues, explaining that the record-setting sale in June didn’t surprise him much. What has surprised him is how long it has taken for great rugs to gain this level of recognition. “These great rugs were made as a universal expression to help us to look at everything in a deeper fashion,” he says, “and I think that’s exactly what’s now being discovered.”

Jon Schreiber doesn’t need a record-setting sale to understand the significance of antique Oriental rugs. The 59-year-old collector grew up in an artistic family and jokes that he was raised at the Metropolitan Museum of Art and the Museum of Modern Art in New York City. He was introduced to antique Caucasian rugs by his grandmother, who owned five of them, and by the time Schreiber left the United States to study abroad in Jerusalem during his late-teenage years, his passion for the subject was growing stronger.

During his time in Israel, Schreiber lived near the L.A. Mayer Museum for Islamic Art, a small museum tucked away in a residential area of the city, and he remembers the museum showcasing a special exhibit of Kurdish rugs from various private collections. When Schreiber first visited the museum, the exhibit was closed; but he didn’t let that stop him. “I had such a strong desire to see it, so I thought, what the hell, I’ll sneak into it,” he recalls. “I just walked in and saw the whole exhibit.”

When security officers caught him leaving the off-limits area of the museum, they brought him to the curator, who was more interested in learning how the museum’s security measures had failed than he was about pursuing disciplinary action. The interrogation, as it were, revealed Schreiber’s passion for antique rugs, and led to a long-standing friendship between the young enthusiast and the elderly curator. As Schreiber recalls, he spent much of his free time at the museum talking with the curator about antique carpets, and by the time he moved back to the United States he was dedicated to the art form and determined to build a collection of his own.

Today, Schreiber possesses about 200 important rugs from the cities, villages, and tribes of Persia, the Caucasus, and Turkey, all dating from the early 18th century to the late 19th century. “My house looks like a Bedouin tent, every floor and wall space has rugs,” he says. “I love seeing them. The effect of living with them . . . it’s like living with an extremely wise and beautiful person; they have such a harmonizing effect. I feel like my kids have grown up with a very harmonious balance.

“It’s the highest man-made art form on the planet,” he continues, speaking about these woven, antique masterpieces. “The process and steps and the time and energy involved [to create them], there’s nothing that comes close.”

Many enthusiasts share that opinion. “It’s really about the palette and the dyes that were used back then, as well as the designs,” says an anonymous collector from Los Angeles, who focuses only on Persian Ferahan carpets from the 19th century. “The Ferahans are very free-flowing and elegant, but they’re not in your face and ostentatious.”

The collector and his wife began acquiring contemporary art during the mid-1980s, and they consider these antique Persian rugs—which were woven for the aristocracy—to be as intellectual an art form as any other. They also believe that these artistic textiles can be just as impactful as a significant painting or sculpture. “A specific rug can change a room, just as a specific piece of art can change a room,” he says. “The intrinsic value of living with them is just incredible. When you live with one of these pieces that was designed and woven 200 years ago, it gives something back to you every day.”

A new collector of antique rugs and carpets may find the learning process overwhelming. In the most basic terms, these textile works of art can be broken down into four groups: tribal, city, village, and town rugs. As a general rule, tribal rugs use geometric patterns and looser weaves, and usually are small in size. At the opposite end of the spectrum, city carpets incorporate sophisticated floral patterns, precise curvilinear designs, and the finest, tightest weaves. Village rugs most often employ angular patterns and serve as a bridge between tribal and town styles; while town rugs are a bridge between village and city carpets, and are defined by somewhat asymmetrical patterns and novel color palettes.

Understanding these breakdowns is a good beginning; however, they represent only an elementary approach to antique rug connoisseurship. About two dozen additional subcategories of Persian rugs exist, each with a distinct appearance and certain idiosyncrasies. Among connoisseurs, the most popular styles tend to be Caucasian—geometric tribal rugs from the Caucasus Mountains that encompass 85 distinct weaving substyles; Ferahan Sarouk—rugs defined by a town weaving style from west central Persia that are known for their artful combination of geometric and floral motifs; and Laver Kerman—densely floral city rugs featuring superb craftsmanship and pastel colors accented by rich Renaissance red hues.

Collectors who approach these rugs with an investor’s mentality should know that no one style is more valuable than the next; the finest, earliest, and most artful carpets in the best condition within each group all command top dollar on the open market. Most collectors, in fact, are drawn to these works of art for just that—their artistic merits—and some, like S. Hanna, a West Coast collector of rare Caucasian rugs, find it difficult to relate to collectors who feel no connection to the carpets that they own. “You look at a piece of art and it gives you a certain level of satisfaction,” Hanna says. “There’s a visual sort of satisfaction; it’s feeding you in some way, but there’s also an intellectual part of it. When you combine the two, it increases the satisfaction. I’d put rugs at that level. They are a very specific kind of art that provides both a visual and intellectual satisfaction.”

Hanna began collecting about 30 years ago, but initially he approached these woven antiques simply as elements of decor. Gradually, he learned more about them, and armed with a natural interest in art composition, balance, and color, he began to see these antique rugs and carpets as more than just decorative elements for his home. “It’s a journey, and in a lot of ways, the journey is even more interesting than the final product,” he says.

“If you see a top artistic tribal rug, it not only has the right color and the right balance and, of course, the quality and the condition, it also is extremely simple. That simplistic, almost childish art expression is what I look for,” he continues, explaining that he always has rugs on his floors, but he also hangs some on the wall, since some styles can be better appreciated that way. In some cases, given a piece’s age and condition, that method of display is even preferred. “You have to be careful,” he says, “because these are old treasures and you have to treat them as such.”

According to Winitz, serious collectors, like Hanna, perceive these 18th- and 19th-century rugs as works of art, but the rugs have remained undervalued for decades because they are most often displayed underfoot, they typically are considered to be pieces of decorative art only, and many examples were woven by common people. As the market continues to strengthen, Winitz and other collectors acknowledge that new buyers will enter the fray, though they also recognize that not all newcomers will be attracted to these rugs for their intrinsic values. Nevertheless, Winitz believes that collectors who work to hone their eye and buy rugs for their artistry will enjoy the process more and likely will make wiser decisions than those seeking only monetary returns.

“If you look at a rug you’re not going to get it; you have to look into a rug,” he says. “Rugs are more like Joyce than Hemingway; they’re meant to be read over and over again. This is one of the reasons that rugs have tremendous staying power. I have rugs that I’ve inherited and known all my life, and I’m still seeing new things in them.”