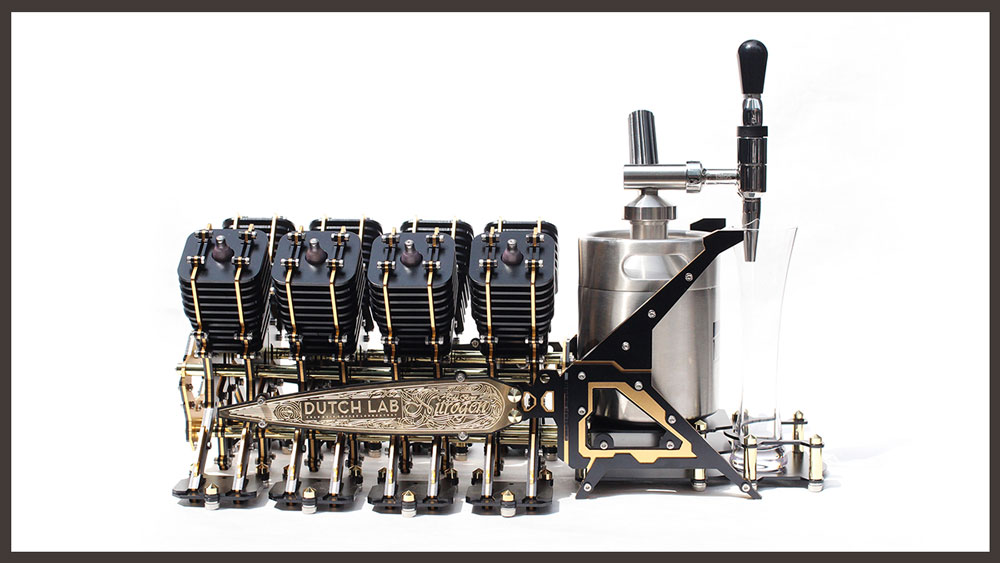 For years, Seoul-based studio Dutch Lab has been turning out cold-brew coffee models that are like righteous Steampunk valentines for purists who crave a little Industrial Age swagger. Too hyperbolic? Then consider the statuesque $17,000 Black & Gold Edition AMKA 3000 or Gothicism, an architectural tower of laser-cut anodized aluminum, brass needle valves, and hand-blown glass tanks. It is a creation with the incense-heavy mood of a medieval church.

And why not? Espresso machines have been raising their design games as of late. While it’s common to find sleek modern options, a few brands have been taking materials into strong consideration. Nespresso’s handsome leather-wrapped models come to mind, as does Montaag Studio’s AnZa, a concrete crowd-funded unit. Dutch Lab has positioned itself in a different area of the market. The company started in 2012, when professional barista Jaewoong Kwak turned his industrial designer gaze towards the lesser known world of cold-brew coffee—a patient, Dutch-inspired process in which room-temperature water is poured over coffee grounds and left to sit for hours (like, 24 of them), yielding a pure, smooth version of the drink.

Admittedly I’ve given little thought to cold brew versus hot brew evangelism (and there are some passionate opinions out there) but designs like the brand’s recently debuted Nitrogen server ($8,000) make compelling aesthetic case for conversion. Created from stainless steel and aluminum, the model features an actual nitrogen gas tank and more 19th century architectural oomph than any classic cold-brew set-up. The laboratory and Victoriana vibe elicit all the double takes the company is hoping for.

But the visuals aren’t only after the easy get. As the company tells Robb Report, “To us, the word ‘steampunk’ is a fiction that started from a single imagination; what would the world look like if the steam engine has developed as it was? The word ‘engine’ is very important in our steampunk series and the Dutch Lab Nitrogen was designed with more nitro-sensibility added into it. Anyone who sees Nitrogen will have the image of V8 engine in their minds and they will all easily guess what it was inspired from.”

As with any specialty coffee-making method, everything is done in service to taste. With their Nitrogen model, Dutch Lab describes the resulting brew as having “an IPA, pale ale-like flavor.

When nitrogen is added to our finest cold brew coffee, the acidic taste harmonizes with Dutch coffee body. We released Nitro to introduce Dutch coffee with a nice, silky smooth finish and creamy foam top.”

The brand’s Lab Bain Marie design also slots into this fantasy-fueled Sci-Fi subgenre—all lace-up boots and dark romance—and meant for the user who wants to warm their cold brew coffee without compromising the flavor.

According to the company, “the name is derived from a French word ‘bain marie’ [water bath]. When people want to have cold brew coffee at warm temperature, they should not simply heat the cold brew coffee, as the process will spoil the taste. But cold brew coffee that is heated in boiling water is not as hot as an Americano and [tastes] smooth.”

Production times vary. Dutch Lab ships their handmade models all over the world, though Customs will likely have some questions.

Here is further proof that the design revolution will be caffeinated.