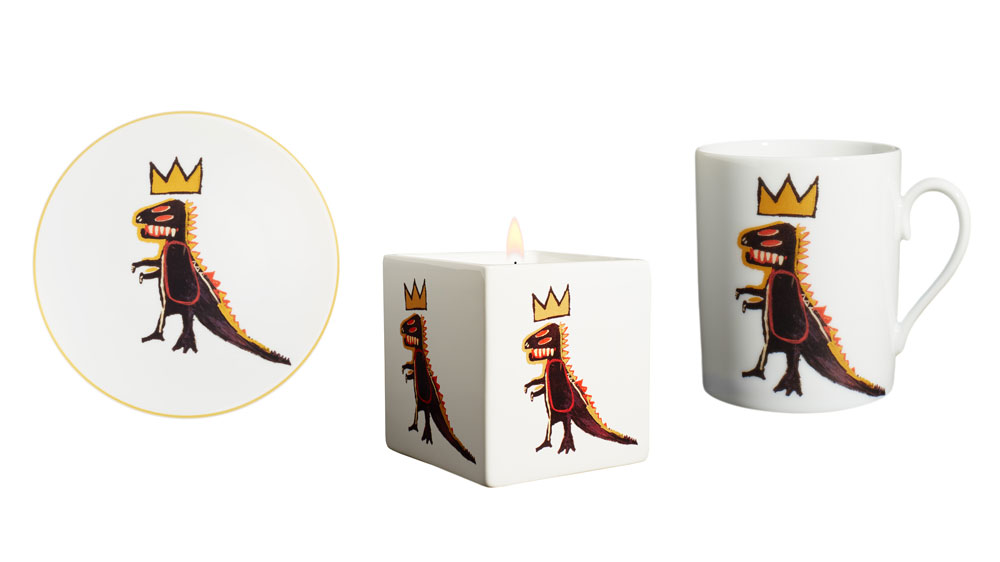 Photo: Courtresy Ligne Blanche and the Estate of Jean-Michel Basquiat

If you missed out on acquiring Jean-Michel Basquiat’s rare-to-market mixed-media Flexible (1984) for $45.3 million at Phillips in New York this past May or the late Brooklyn-based artist’s record-setting Untitled (1982) at Sotheby’s in New York last spring, you may find solace in owning pieces from the latest collection from French porcelain house Ligne Blanche. Titled Gold Dragon, it includes a Limoges plate and a coffee mug, along with a fig-scented candle. Each of the items bears a facsimile of the artist’s 1984 acrylic on canvas Pez Dispenser, which features a crowned dragon inspired by the popular plastic mechanical candy dispensers favored by children. (The original artwork sold for a seemingly paltry $170,500 at Christie’s in New York on November 8, 1989.)

“Jean-Michel Basquiat’s crowned dinosaur is a take on childhood nostalgia and his love of cartoons, superheroes, and comic-book characters—the T-Rex becoming a readily recognizable image born of Basquiat’s playful imagination,” says Pierre Pelegry, who founded Ligne Blanche in 2006. The collection comes as the result of a collaboration between the house and the New York–based Basquiat Foundation, which has licensed a dozen of his works to Ligne Blanche. Among the best known are the artist’s Untitled (Return of the Central Figure) (1983), Glenn (1984), and Untitled (1982).

To date, Ligne Blanche has collaborated with a dozen blue-chip artists and their estates for its offerings, including such notables as Jack Pierson, Keith Haring, Robert Mapplethorpe, Andy Warhol, Gilbert & George, Tom Sachs, and René Magritte. Among the iconic works depicted in the range of wares are Mapplethorpe’s sensuous black-and-white image Wrestler (1989) and Magritte’s La Grande Guerre (1964). “Through these collections, Ligne Blanche brings the allure of vibrant artworks into the everyday life of an ever-growing number of art lovers,” says Pelegry.