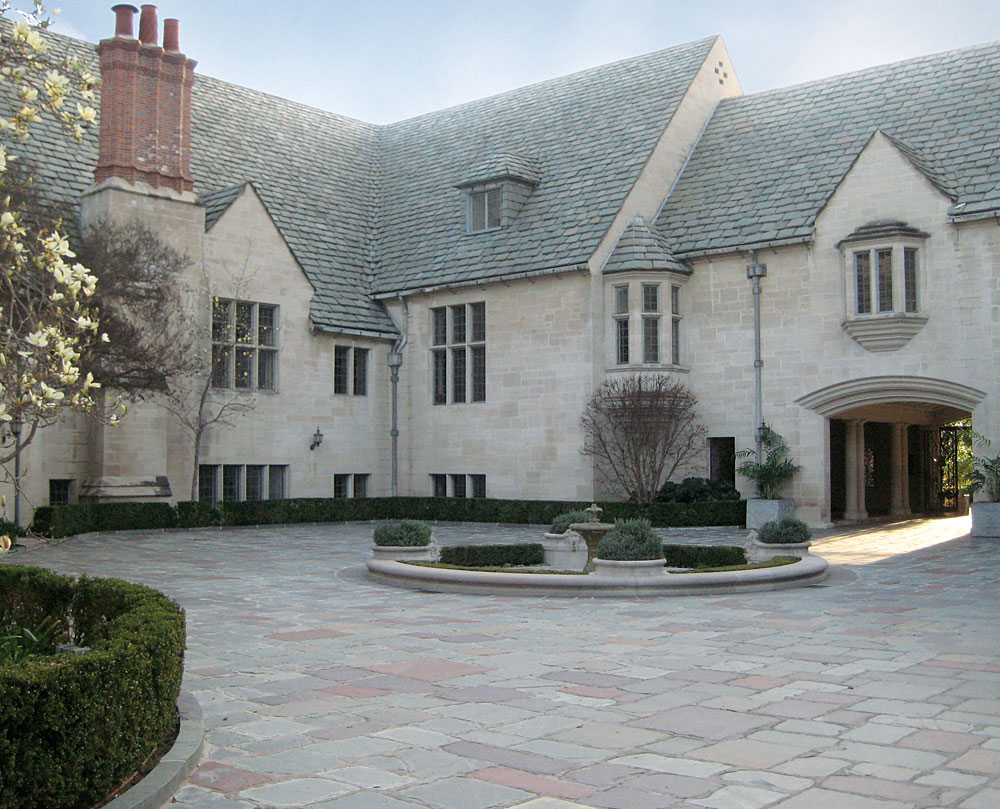 A house inevitably expresses the personality of its owner—for better or worse. This year’s Ultimate Home (see “Taking Shapes,” page 78), a dramatic yet welcoming space flooded with natural light, makes a case for the congenial character of its occupants. However, another ultimate Southern California address, 905 Loma Vista Drive in Beverly Hills, casts rather a dark reflection of the man who built it.

From 1926 to 1928, crews removed hundreds of thousands of cubic feet of earth in sculpting the private realm over which architect Gordon B. Kaufman’s imposing 46,000-square-foot Gothic home presides. Paul Thiene, the landscape architect, spared no expense, enlivening the 12.5 acres with reflecting pools, an artificial lake, and a golfing green. As his lead designer later recalled, “I would ask Mr. Thiene what the client would want and his response was, ‘Give them everything.’ ”

To their contemporaries, it must have seemed that there was very little the owners of the estate—Greystone (pictured)—did not already possess. This Anglophilic opulence was, after all, underwritten by Edward L. Doheny, a pioneer of the California petroleum industry whose fortunes trace a pattern as intricate as Kaufman’s architecture.

The cornerstones of destiny were laid in 1880, when the young Doheny left his position with the U.S. Geological Survey to become a prospector in the Arizona Territory. There he made two friends: Charles A. Canfield and Albert Fall. Doheny worked alongside both men for several years; but after Canfield discovered a silver-ore deposit that grossed $390,000, and relocated his family to Los Angeles, Doheny, discouraged, decided to follow. One day in 1892, while pondering his prospects, he noticed an old wagon hauling a load of brownish grease. The driver told him it was brea, or pitch, from a ground hole in Westlake Park. Doheny realized that this “ugly-looking substance,” as he called it, was more precious than any of the metals he had mined. With a $400 investment from Canfield, he embarked on an oil-drilling enterprise that would eventually become the Pan American Petroleum Company. When Doheny began construction on Greystone, which was to be a gift to his son Ned, his personal fortune stood at approximately $100 million, according to estimates.

Several years before the crew broke ground, Fall made an unfortunate reappearance in the oilman’s life. In 1921, while he was the Secretary of the Interior under Harding, Fall allegedly accepted bribes from private companies in exchange for leases on the Elk Hills and Teapot Dome naval oil reserves, touching off one of the early 20th century’s most incendiary political scandals. One of these “loans,” as Fall termed them, was made on Doheny’s behalf by Ned; in the company of his longtime private secretary and friend, Hugh Plunkett, Ned turned over $100,000 cash to Fall in Washington, D.C. The government brought criminal charges against the senior Doheny, who some have speculated built Greystone for his son as a retreat from the publicity that preceded Ned’s scheduled testimony in Doheny’s upcoming trial.

Ned never made that court appearance. On the night of February 16, 1929, E.C. Fishbaugh—?a family physician summoned by Ned’s wife—discovered the bodies of Ned and Plunkett in a first-floor guest suite at Greystone; both had been shot in the head with the same .45 Colt Bisley revolver. The official investigation determined that Plunkett, who had been suffering from a nervous disorder—and whom the Dohenys and Fishbaugh had encouraged to enter a sanitarium days before his death—killed his employer during an argument before killing himself. Plunkett had overseen the construction of the mansion and, with its completion, suspected that his usefulness might have come to an end. He was also scheduled to testify at trial and, according to some, feared that the Dohenys’ efforts to commit him were meant to secure his silence.

The crime spawned lurid rumors. The presence of powder burns on Ned’s wound, for instance, and the absence of any on Plunkett’s, suggested that Plunkett had been shot from a greater distance; many concluded from this evidence that Ned was the actual gunman and that his father had exercised his considerable influence to cover up this unpleasant truth. No inquest was ever held. But if Doheny was guilty of intervening in the investigation and of using Ned to make a bribe, these crimes did not go unpunished: His ultimate home—and the fortune behind it—in the end exacted from him the ultimate price.