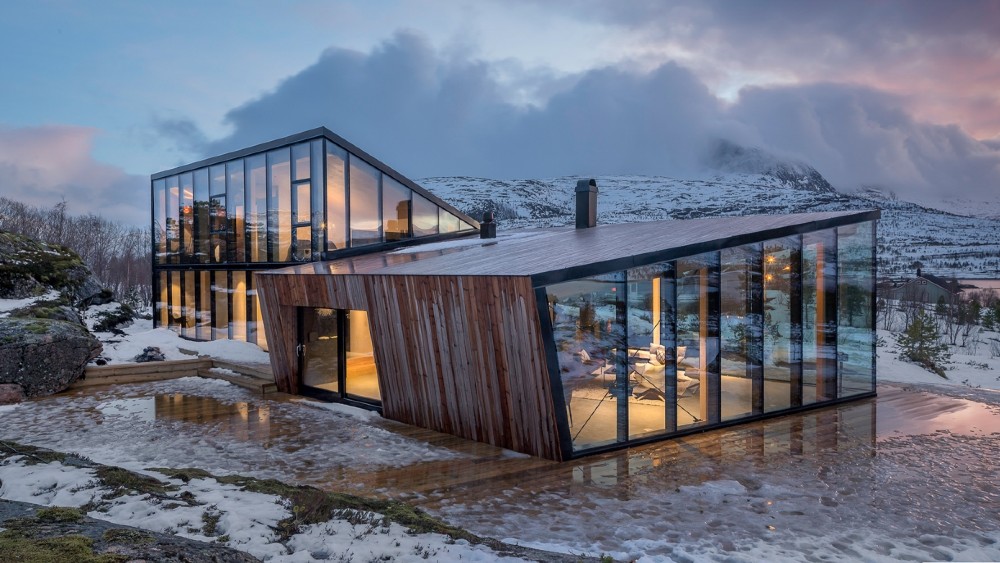 With all the pressures that come with modern life, sometimes you have to get far away from the city. And based on the looks of the Efjord retreat cabin in Norway, its owner has found the perfect location to do just that.

The striking cabin was built on Halvarøy island off the Ofoten fjord in the northern region of the country between October 2015 and November 2017, reports ArchDaily. According to architect Snorre Stinessen of Stinessen Arkitektur, the structure was built for a client who wanted something that had breathtaking panoramic views and would also give them the “feeling of isolation and total privacy,” allowing them to really put some distance between them and the daily grind.

And sure enough, the angular cabin, with its two main sections pointed in opposite directions, offers up some truly awe-inspiring views from its giant floor-to-ceiling windows. Sitting atop a natural ledge and shielded to the north by a ridge of terrain, the front of the of the house looks upon two of Norway’s most challenging peaks to the north and the fjord and evening sun to the west. The rear, meanwhile, looks upon the morning sun and the surrounding landscape to the east.

Just as impressive is the cabin itself, which consists of a spacious living room and kitchen, along with two bedrooms and bathrooms. According to its Gold A’ Design Award listing, the 650-square-foot building was constructed primarily from wood. The exterior consists of structural glazing and core pinewood treated with iron sulphate. The inside of the house is clad in birch veneer and has a granite tile floor, while the sauna—yes there’s a sauna—makes use of aspen slats because of their ability to absorb moisture.

As picturesque as the cabin may be, it’s not located in the most forgiving of areas. The fjord can be subject to hurricane-force winds and heavy snow loads, in addition to freezing temperatures. But the structure was designed with these harsh conditions in mind, as its split-section layout not only looks good, but provides some extra stability as well. Check out more photos of the cabin below:

Even the sauna has views.  Stinessen Arkitektur

The Efjord’s windows mirror the sky and mountains.  Stinessen Arkitektur

The two-section layout offers vistas from both sides.  Stinessen Arkitektur