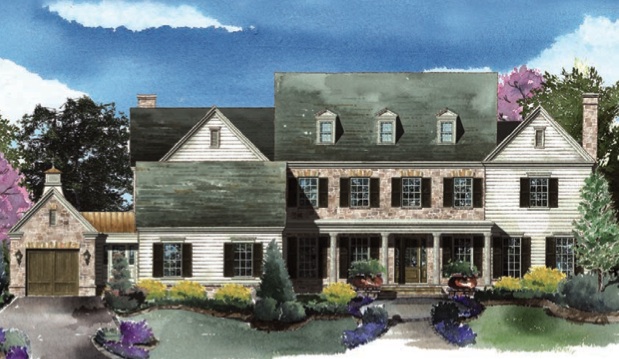 (WASHINGTON, DC, October 2014) — The DC Design House is pleased to announce that the new country estate at 956 Mackall Farm Lane in McLean, VA is the 2015 location for the 8th Annual DC Design House benefiting Children’s National Health System. The 2015 DC Design House will be held from April 11 to May 10.

Built by Artisan Builders and designed by Harrison Design, the 8,869-square-foot home replicates an Old American Farmhouse as a nod to Virginia’s rich countryside, while also offering all the amenities of modern living. By designing the home in parts, rather than as a whole, it appears to have been added onto over the years. The interior floor plan is an L shape, which was popular among early farmers because of the ease and efficiency of adding future rooms. This modern farmhouse offers light-filled interior rooms that blend old elements, such as reclaimed wood and antiques with new features, including top-of-the-line kitchen appliances. A gallery finished with stone from an old Virginia farmhouse and a library paneled in quarter-sawn oak are among the vintage touches. The exterior features covered porches, antique style lighting, and natural stone in a random, hand-cut pattern. Landscape design is by Fine Landscapes and sales by Yeonas & Shafran Real Estate.

“My partners and I are truly thrilled that Artisan Builders’ New Old Farmhouse in Mclean, Virginia has been selected as the 2015 DC Design House,” says Stephen Yeonas. “Our entire team is committed to making the event the best ever, while helping a great cause, Children’s National Health System.”

On Friday, October 31 from 10 a.m. to 3 p.m. and Saturday, November 1 from 10 a.m. to 3 p.m., designers will have the opportunity to preview the more than 20 rooms in the 2015 DC Design House. The three-level home includes first floor formal and family foyers, dining and living rooms, library, kitchen, breakfast room, family room, mudroom and front and rear covered porches. The upper level rooms include a master suite with reading nook and three secondary en suites, while the lower level offers a bistro and bar, media and game rooms, bedroom and bath, and more.

Designers’ presentation boards and proposals are due by November 10 and selected designers are notified by November 17. For more information about the designer walk-throughs on October 31 and November 1, contact Taylor Wells at twells1957@aol.com.

About the DC Design House

The Washington, DC Design House, a 501(c)3 nonprofit entity, began in 2008 as a unique design show house event for the DC Metro area in which top area designers showcased their talents into a “flowing design home” to raise funds for a local charity. What began as a single event goal to raise funds for Children’s National Health System, formerly Children’s National Medical Center, has developed into the region’s foremost annual residential design attraction and as a leading annual fundraiser event for Children’s National Health System. Established by business partners and husband-and-wife founders Skip and Debbie Singleton, Principals of DC Living Real Estate, LLC, in partnership with an all volunteer team of sponsors, organizers, regional media, design industry manufacturers and some of the nation’s most awarded and widely recognized designers, the DC Design House has quickly earned a following with more than 62,000 visitors and more than $1.2 million raised for Children’s National Health System over the last seven years. The tradition continues with the 2015 DC Design House. For more information, visit www.dcdesignhouse.com, Facebook and Twitter.