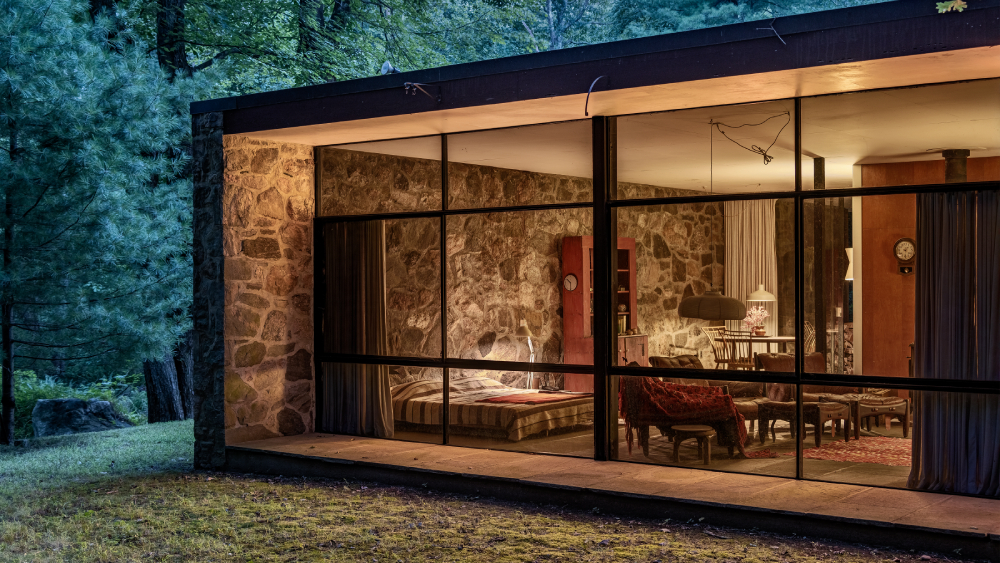 When Eliot Noyes first arrived at Harvard’s Graduate School of Design in 1932, he was frustrated. At the time, beaux arts architecture was the teaching model—a style that felt stuck in the past and out of touch with the Bauhaus modernists who were making waves in Germany. It wasn’t until Noyes had a chance to learn from the school’s new chairman and founder of the Bauhaus School, Walter Gropius, that his career really began. He went on to become MoMA’s first director of industrial design and was the design brain behind everything from the Selectric typewriter to the Bubble Houses in Florida. Yet one of the architect’s crowning achievements was his home in New Canaan, Conn., which remains privately owned by his descendants to this day. Invitations to this modernist masterpiece are scarce—which is why At The Noyes House, an art-and-design exhibition that opens on September 15 in the residence itself, is a not-to-be-missed opportunity.

A view of the home’s open interior.  Photo by Michael Biondo

The event is a collaboration between art galleries Blum & Poe and Mendes Wood DM, as well as art-and-design fair Object & Thing—the latter caused a stir when it debuted last year with its no booth, no dealer model. “My father conceived of the architecture as a backdrop to seamlessly mingle art with daily life,” says Frederick Noyes, the architect’s son. “These unique works of art and design show the flexibility for which the house was designed.”  The exhibition will be held throughout the interior and outdoor spaces, and will display artworks by Alma Allen, Lynda Benglis, Jim McDowell, Sonia Gomes and Antonio Obá, plus ceramics by Kazunori Hamama and Jim McDowell, design objects by Green River Project LLC and many others. Best of all—as Eliot Noyes might say—there’s not a lick of beaux arts aesthetic in sight.