×
By Laura Euler for Dirt.com 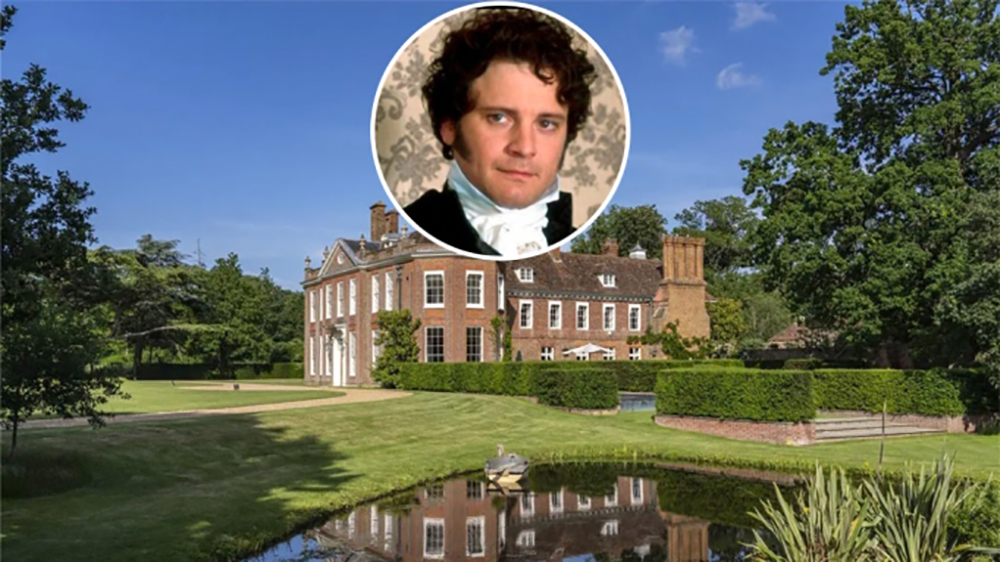 Bookish girls have been in love with Mr. Darcy, from Jane Austen’s “Pride and Prejudice,” for more than 200 years now. The character reached his apotheosis in the 1995 BBC series, when Colin Firth stripped down to take a dip in a lake and women (and many men) around the world swooned. It is easy to imagine Mr. Darcy swimming at this house, known as Milgate, with its long and illustrious history, as well as its ties to Ms. Austen herself. Just like the fictional Pemberley, Milgate features a beautiful, romantic boating lake near an enchanting summerhouse and a quaint thatched potting shed.

Historic homes in England are listed, according to their historic and architectural importance, either Grade I, Grade II, or Grade III. Only about 2.5% of residences are important enough to be listed Grade I listed, as is this unique manor house. Parts of the 9,934-square-foot mansion date back about 660 years, and the residence has long been celebrated for its architecture. Acclaimed art historian Nikolaus Pevsner complimented, for example, the house’s “splendid earliest Georgian west front.” Besides the Austen family, the estate has been linked to Elizabeth I and even a famous 20th century American poet.

The house offers nine bedrooms, seven bathrooms, and five reception rooms, all set on 5.4 acres of land in the beautiful Kent countryside about an hour-and-a-half’s drive southeast of Central London. There are also several outbuildings, including a four-bedroom lodge. It is offered jointly by Savills and Strutt & Parker for about $6.8 million.

“Milgate House in itself is a pretty extraordinary home,” says Phillippa Dalby-Welsh from Savills. “Featuring an abundance of period features that have been expertly restored under the supervision of its current owners, as well as being equipped with the latest amenities that are perfect for modern life, Milgate is simply one of the best country homes available in the South East.”

Andrew Harwood, at Strutt & Parker, says, “Milgate House’s beauty is notable both inside and out. The gardens and grounds do not disappoint and are some of the finest I have seen. The house has been the subject of a painstaking and most thoughtful refurbishment by the current owners, finished with the upmost respect to its fascinating provenance.”

The lush gardens and pond a part of the property.  Savills

The earliest known history of Milgate can be traced back to its ownership by Robert de Coloigne in 1361. However, the water mills on the River Len, from where the house gets its name, are known to be much older than that. One of them is recorded in the Domesday Book, which was written in 1086, and pieces of a Roman millstone have recently been found in the bed of the millstream. The current house shows traces of a medieval building beneath the dining room where a medieval stone tunnel passes beneath the house at that point.

Despite its grandeur, Milgate has never been the estate of aristocrats, but twice its owners have been knights with connections to the royal court. The first was Sir Thomas Fludd who added the south-west or kitchen wing of the house in the late 16th century. (Fludd was Elizabeth I’s Treasurer of War and responsible for funding her forces in France and Holland.)

A boldly decorated public room inside the home.  Savills

The Fludds were succeeded by the Cage family around 1624, and the impressive reception rooms still present in the current house were created by them at the start of their nearly 300 years of ownership. Sir William Cage received his knighthood for being one of the leaders of the Royalist cavalcade during the English Civil War, when the monarchy was restored in 1660. His son, another William Cage, built the baroque style front elevation on the house around 1713 and commissioned the murals on the walls and ceiling of the staircase, which are still there 400 years later. As one of the leading Kent families, the Cages intermarried with the family of Jane Austen who became familiar with the house and referred to Milgate in her letters.

During the 19th century, notable tenants of the house were Sir John Croft, who spied for the Duke of Wellington in the Peninsula War (1807-1814), and Julius Lucius Brenchley, an explorer who donated hundreds of South Pacific tribal artefacts to the British Museum.

As many other English country estates did, Milgate suffered through much of the 20th century. Crippling taxes and death duties, among other economic forces, meant that many grand houses were demolished or left private hands, become commercial enterprises such as boutique hotels and nursing homes.

But in the 1970s — luckily for Milgate and historic architecture lovers — Guinness beer heiress Lady Caroline Blackwood bought Milgate with her husband, the famous American poet Robert Lowell. Lowell took some poetic license when he summarized the history of the house in his poem, “Fall Weekend at Milgate”:

Most fell between. We’re landlords for the weekend, and watch October go balmy.

Midday heat draws poison from the Jacobean brick, and invites the wilderness to our doorstep…

The current owners bought Milgate in 2000, and have done much hard work to restore and update this extraordinary piece of history. Now, Milgate is ready for the next chapter of its long history, and will make a very special opportunity for its next custodians.

The entrance hall easily doubles as a ball room and leads to the mansion’s numerous and exceptionally detailed public rooms.

The blend of old and new here — the ancient fireplace recess, the worn kitchen table, the limestone flagstone floor tiles — combine very effectively with the sleek stainless island. P.S. The Aga stove here cost as much as a nice house in Kansas!

Though Milgate does not have a history or royal ownership, the murals that surround the main staircase wouldn’t be out of place in a royal palace.

Buyers: make a deal for the marble statue!

A four poster is so cozy in the winter, especially with the fire going.

The main bathroom has been crisply and fully updated with all the mod-cons.

We don’t know why we don’t have a thatched potting shed, either.

Perfect symmetry leading to the summerhouse. Check out the estate’s floor plans, below.