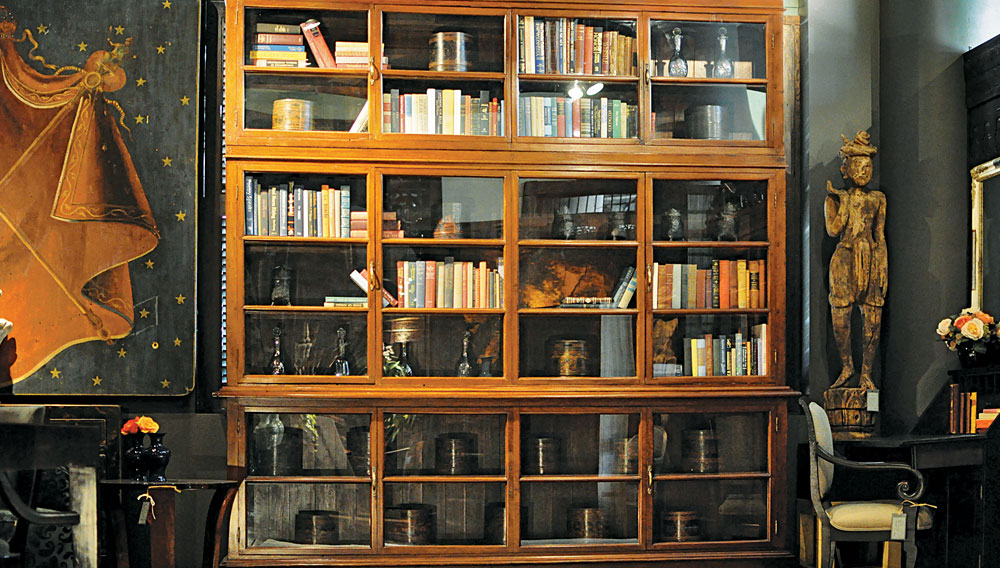 Doug Van Tress, co-owner of the Golden Triangle (www.goldentriangle.biz), a rare furnishings and antiques store in Chicago, kicks his feet up on a British colonial-style desk in his office and tells the story of how his store’s refined inventory came to be. When he first opened the shop in 1989, Van Tress’ intent was to specialize in Asian artifacts; but as he says, matter-of-factly, you can’t sell anything without somehow displaying it. In his journeys throughout the Anglo-Indian world—primarily India, Burma, and Thailand—during the 1980s, Van Tress came upon beautifully preserved bookcases that were built during the late 19th century, when British colonialism still was strong. Recognizing that they would be an ideal way to display his future wares, Van Tress purchased a few and shipped them back to Chicago. However, that first year in business taught him a valuable lesson about the retail industry: Selling things that people need is almost always a more viable business than offering them things that they don’t. “They sold better than my artifacts,” Van Tress says of the British colonial bookcases, and by 1990, that style of furniture had become his specialty.

British colonial furniture was mostly made from teak, a common species found throughout Southeast Asia, and that alone played a pivotal role in how and why the furniture was constructed in the manner that it was. Teak is naturally water-resistant and its scent repels insects. It’s also a dense wood that’s not as hard as other species, which means carpenters can easily shape it into the forms that they envision. Those factors contributed to why the furniture was built from teak in the first place, but a general surplus of teak trees in that region of the world is, in many ways, responsible for why these pieces of furniture still exist.

British furniture built in England during that colonial era was formal and polished, but it also was thinner and more delicate due to a limited supply of hardwoods. Because teak was plentiful in Burma, Thailand, and India, however, furniture makers there were less restricted in the amounts of wood they could use for each piece. That allowed them to create thicker, more solid, and thereby more durable bookcases and desks. Beyond the quality of construction, Van Tress says it’s the blending of various cultures evident in these bookcases that makes them so desirable today. “The people making them hadn’t been to England, so they didn’t know how they were supposed to be,” he says, explaining that the indigenous people charged with making this furniture had only a rough model to follow. “They carved peacocks on everything [in their own culture], so why not carve a peacock [on this furniture]?” That philosophy created a unique style to the pieces. “Instead of being polished and formal, it’s a little more sporty and rakish,” Van Tress says. “It’s a British style that’s relaxed, but at the same time it’s very high quality.”

Golden Triangle imports about 25 bookcases a year and generally has about the same number in its inventory at all times. A small bookcase typically starts at $2,500, but a large one (8.5 feet long, 9 feet tall, and 1.5 feet deep) could cost $15,000. And as Van Tress explains, not only are his customers acquiring beautifully made pieces of furniture; they’re also buying an artifact that helped the British aristocracy live like kings in an untamed wilderness. “That was the whole point of being a colonialist,” he says. “Not just to live, but to live very well.”