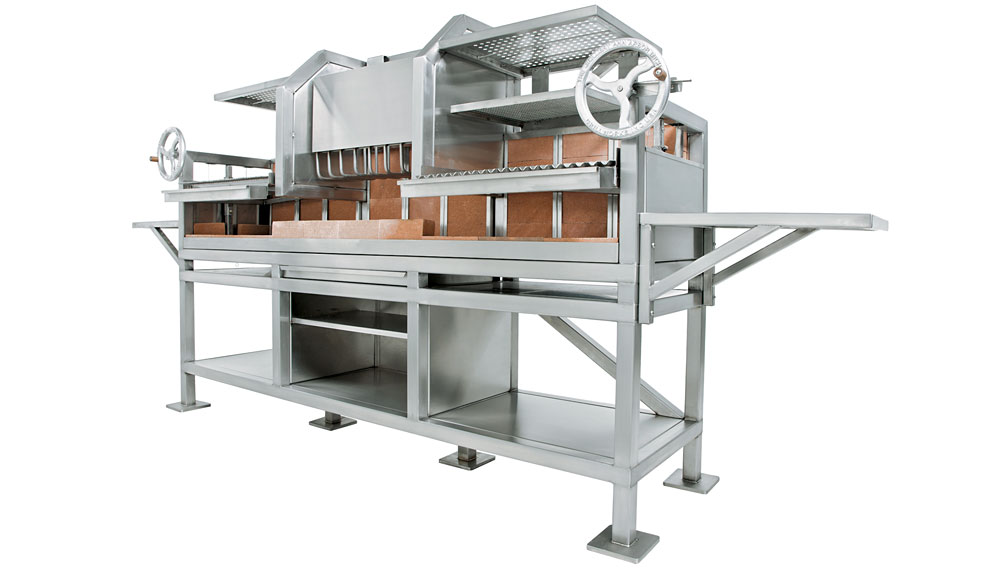 A backyard barbecue is as American as the Fourth of July, fried chicken, and Chevrolet. It’s also as Argentinean as gauchos and the tango. To the South Americans, the barbecue, or asado, is nearly a sacred rite, where no practitioner would ever perform the ultimate blasphemy—cooking with gas.

Ben Eisendrath, the owner and CEO of Grillworks (www.grillery.com), grew up exposed to that philosophy and was introduced to international methods of barbecuing as a youngster. His father, who worked as a foreign correspondent for Time magazine in the 1960s and ’70s, frequently brought the family along on assignments, and the grilling ritual in Argentina had a lasting impression on his son. “Dad was covering the coup in Chile,” Eisendrath recalls, “and Argentina was the first area I was old enough to remember.” What he remembers is a distinctive outdoor cooking technique: “They used wood, and created charcoal on the spot.”

Eventually the elder Eisendrath settled down in northern Michigan, where he tinkered with grill inventions that would allow him to cook with fire. He finally felt he got it right with a stainless steel model that he dubbed the Grillery and subsequently patented. Now, more than 30 years later, Ben runs the family business, which produces his father’s invention in various forms.

The grills are put together by metal fabricators who developed their skills by working on classic cars and yachts. All parts of the product are made in the Midwest, and the finished products come in a range of sizes, which start at about $2,750. The company’s largest grill—and its flagship model—the Infierno (about $30,000), is a restaurant-grade monster that took two years to develop through collaboration with Dan Barber and his chefs at Blue Hill at Stone Barns, an upscale restaurant just east of Sleepy Hollow, N.Y. The grills are available either as freestanding units or custom built-in projects, which are quoted individually.

The Infierno features a fire cage in the center, where the grill master places whole pieces of wood. The structure is built so that a chimney-type draft helps the wood to burn hot and fast. Coals soon fall off into the hearth beneath, where the cook can then scoop them over to one or both of the grill stations at the side. Having two stations means different types of foods—meats and vegetables, for example—can be cooked simultaneously using different intensities of heat. The grills can be cranked up or down at least 16 inches with a wheel, which allows the chef to cook over either open fire or coals. Numerous compartments provide ample storage; separate subshelves allow for smoking, lower-heat cooking, or warming; and a fire brick lining serves as a hearth for heating or baking.

Eisendrath says his company took what it learned from working with Barber to design the fire cage for the Infierno, which not only produces a delicious end-product but makes for a dramatic presentation. “The fire cage acts as a blast furnace in the center. As the coals form they drop down and form a bed below, which [Barber’s] customers can see,” Eisendrath says. Of course, the same holds true for family and friends gathered on a private backyard patio.

Although Grillworks products are inspired by the cooking of Argentina, Eisendrath acknowledges one point of departure in his recommendations for using the fire. “The Argentinians believe adamantly in creating the coals elsewhere and scooping them over,” he says. “But in the U.S. we think it’s OK to start cooking immediately over the flame.”